The NHL, Evangelicals, and POTUS

In light of last night’s first game in the Stanley Cup between Boston and St. Louis, Chris Gehrz wonders if rule changes in hockey that reduce (or abolish) fighting might be applicable to a kinder, gentler version of evangelical Protestantism:

In the NHL and its associated minor and junior leagues, fights do carry a major penalty of five minutes, but that has almost no impact on the game. In most cases, there’s no power play advantage, since both teams lose a player — and it’s usually a relatively unskilled one who plays few shifts anyway. But at all other levels, fighting carries much stiffer penalties: players are thrown out of that game and face suspensions from future games. Just like what happens when players fight in all other major team sports, even in North America….

Does that mean anything for the future of evangelicalism? It doesn’t seem like a religious movement that lacks any governing authority could have its behavior modified by the equivalent of “rules changes.” There’s no magisterium, ecumenical council, or general assembly to tell evangelicals to stop needlessly fighting each other and everyone else — or to penalize them when they break that rule.

And absent such regulation and disincentives, is there any reason to think that evangelicalism would become any less combative? Well, here let me point out that “fighting” is not typical of evangelicalism in at least some other parts of the world… like Canada, eh?

My neighbors to the north may love fighting in hockey, but their evangelicals behave very differently than ours. Here I’d recommend Lydia Bean’s comparative study of evangelical congregations along the New York-Ontario border; while the Canadians were about as theologically and socially conservative as their neighbors, they were far less politically partisan. She found that Canadian evangelicals weren’t Religious Right stalwarts, but instead exemplified what Christian Smith has called “engaged orthodoxy”: “sustaining a dynamic tension with their sociocultural environment, while avoiding separatism.”

Maybe that’s just a function of Canada’s evangelicals being an even smaller minority in a more secular country. (Perhaps it does result from “rules changes” imposed from above — not by religious authorities, but those wielding political, legal, educational, economic, and cultural power.) In any event, the case of Canada does suggest that evangelicalism can become less combative while still remaining recognizably evangelical. And that leads me to the most important problem with Adam’s analogy:

Fighting is disappearing from the NHL.

According to HockeyFights.com (yes, that’s a thing), less than 17% of NHL games this season have had even one fight, down from 25% just two years ago and 40% ten years ago….

That is one take. Another comes from the amazing story of John Scott, the legendary NHL goon, who became a prank nominee for the 2016 NHL All Star Game (from journalists and fans who were tired of the league’s officials micro-managing the game, including taking fighting out of hockey) and wound up receiving the most votes and — spoiler alert — the All Star Game’s MVP. The whole affair is wonderfully rendered on WNYC’s Radiolab, with a show aptly titled “Punchline.” For those who won’t listen — though you really should, it’s funny, poignant, feel-good, and dramatic all in one — here‘s a quick summary:

The campaign to send Arizona Coyotes enforcer John Scott to the NHL All-Star game last season began as a joke that he didn’t quite get. Known for fighting and not finesse, he had 11 points over eight seasons and was hardly a household name. That changed when an Internet-fueled movement, tapping into fans’ scorn for the All-Star event, exploded and produced enough votes to send him to Nashville as the captain of the Pacific Division team.

Although a trade to Montreal’s top minor-league team could have made him ineligible — and although an NHL executive suggested he decline the All-Star berth — Scott kept his spot. By then he had become an anti-establishment folk hero, a status he cemented when he scored two goals, was named the most valuable player, and was carried off the ice on his teammates’ shoulders. Awaiting him was his happily dazed wife, who was due to give birth to their twin daughters any day.

No matter who’s voted the MVP of Sunday’s All-Star game at Staples Center, that player’s story won’t be as joyfully improbable as Scott’s. It can’t be: The league, burned by Scott’s selection, closed voting loopholes so it couldn’t happen again.

“It all still seems strange. Whenever I look back at it I say, ‘OK that actually did happen,’ ” Scott said in a phone interview. “It was such a strange set of circumstances and how it went down. I think it will always be a little odd to me, just to think back and that it actually did happen.”

Scott played only one more NHL game, for Montreal, and he retired in November. The SUV he won in Nashville comes in handy to carry the twins — born four days after his All-Star feats — and his older daughters, 5 and 3, around town in Traverse City, Mich. Between his family, the book he published in December and his involvement in a planned “Rocky”-type movie about his career and unexpected fame, he’s almost too busy to miss hockey.

“A little bit, but for the most part, no. I’m OK with leaving,” he said. “I’ve got a lot of stuff going on. I’ve got four kids at home and a wife who needs my help so it’s been easy to step away because I have a lot of distractions.”

What does Scott have to do with evangelical Protestantism? Well, his election to the NHL All Star game was occurring at the same time that Donald Trump was campaigning for POTUS. And part of what made Scott and Trump appealing was the chance to send a message to media, political, and sports elites about the way they were running national and international affairs. John Scott’s win was a harbinger of Trump’s.

Should evangelicals behave better than NHL fans? Should they not favor goon presidents the way that NHL executives want to keep fighting out of professional hockey? Perhaps. But academics like Gehrz might want to consider that the kinder, gentler version of evangelicalism he favors was precisely what George W. Bush’s compassionate conservatism was supposed to provide. Look how that turned out. 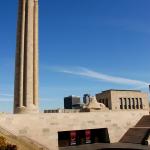 May 24, 2019
What If American Wars Had Turned Out Differently?
Next Post

May 30, 2019 What Sohrab Ahmari Doesn't Understand about Evangelicals and Conservatism
Recent Comments
0 | Leave a Comment
Browse Our Archives
Follow Us!

Counterfeit Worship
Daniel 3:4-7 – And the herald proclaimed aloud, “You are commanded, O...
view all Evangelical blogs
What Are Your Thoughts?leave a comment
Copyright 2008-2020, Patheos. All rights reserved.