David French doesn’t want you to confuse him with evangelical Protestants who do not receive positive coverage in the media.

That likely explains why he can be critical of John MacArthur and defend Raphael Warnock.

Back in October of 2019 French showed off his bona fides with readers of The Dispatch by taking Beth Moore’s side over John MacArthur.

For those who don’t have seven minutes to spare, it features Christian pastor and teacher John MacArthur playing a form of word-association game at a conference at Grace Community Church in Sun Valley, California. He’s asked about popular Christian author and speaker Beth Moore. His response? “Go home.”

The audience erupts in laughter and cheers. He continues, “There is no case that can be made biblicly for a woman preacher. Period. Paragraph. End of discussion.” Other panelists chime in, calling her “narcissistic,” saying that she preaches herself, not Christ.

French then informs readers of the debates among evangelicals about women’s and men’s roles without tipping his hand. But he is not reluctant to judge MacArthur:

Micah 6:8 requires believers to “do justice,” but it also requires them to “love kindness” and “walk humbly” before the Lord. The MacArthur discussion looked far more like an effort to “own” the alleged libs than it looked like an effort to balance the quest for justice with the imperatives of grace.

But the problem goes deeper than manner. Note how MacArthur reflexively attacks the #MeToo movement. On first glance, this is a puzzling choice. There is nothing inherently un-Christian about a movement that has mainly exposed celebrity rapists and mainstream media Lotharios. It has also exposed abuse within the church, but no Christian leader should turn away from the reality of sexual misconduct from the pulpit and in the pews.

In fact, by revealing the secrets lurking in the dark corners of Hollywood, the movement has done more than a generation of preachers thundering from the pulpit to discredit many of the people and institutions that used to sneer at the very Christians who were laughing with MacArthur in that room.

Yes, there have been excesses. There are excesses in every human movement. But one suspects—especially when combined with MacArthur’s mention of the Southern Baptist resolution on intersectionality—that the goal is to slam the door on any secular left influence on the church, regardless of its virtues.

French does not try to understand MacArthur’s slamming the door on “any secular left influence,” as if that’s the most loving way of characterizing it, but for Pastor Warnock he has time to pull up a chair, listen, and then interpret positively. On the matter of Baptist pastor’s sermon that asserted a dichotomy between God and the U.S. military (and not being able to serve both), French explained:

I will admit that I’ve never heard “God and the military” in the two masters sermons I’ve heard in conservative churches, but it’s not because the concept isn’t just as true, but rather because conservative Evangelical churches rarely “go there.” Progressive churches and pastors will. In fact, it sometimes feels as if there is an Eleventh Commandment in many conservative American churches, “Thou shalt honor the military.”

But let’s suppose for a moment that Warnock is a pacifist, and he truly believes that Christians shouldn’t serve in the military. Is that a reason for him to drop out of the race, as senators Cotton and Blackburn demand? Should he be condemned and reviled for that belief?

Not at all. There is an ancient and honorable tradition of Christian pacifism. As a theological matter, I disagree with it, but I respect it.

Republicans need to be very careful about condemning religious beliefs that are outside of the secular political mainstream. After all, the majority of Americans don’t hold to conservative Evangelical ideas about sexual morality, salvation, or the complementary roles of men and women in church and the family.

For a writer who calls himself a “Calvinist in the reformed tradition” and who recommends Tim Keller of the PCA, it might seem odd to defend Warnock and dismiss MacArthur. But if you want to indicate that you are a certain kind of Protestant and not the other kind, French’s commentary makes sense. 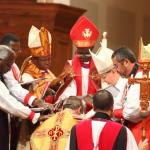