Getting Real: The Marriage Protection Amendment

Election time is just around the corner.

That means that you will be getting a lot of attention from the people who speak for you in government.

When candidates hold coffees or teas; when they have their town halls or come to your door, make the effort to go and then to talk to them.  Let them know that you’ll be watching what they do if they are elected. Do not assume that because a candidate is with one party or the other that you know how they will vote and what they will do.

Ask these candidates, flat out, how they will vote on questions concerning the life of the unborn, violence against women and euthanasia. Then, follow that up with a new one. Ask them if they will vote for the Marriage Protection Amendment.

Archbishop Salvatore Cordileone, who is head of the US Conference of Catholic Bishops’ marriage defense efforts, recently sent a letter to Congressman Heulskamp, voicing his support for the proposed amendment.

I agree with the Archbishop that a Constitutional Amendment is the only way to approach this issue. If the Supreme Court had allowed DOMA to stand, the question could and would have been resolved legislatively. But they did not do that, which leaves us with this as our only way to proceed.

In his letter, Cardinal Cordileone said,

Your proposed Marriage Protection Amendment to the U.S. Constitution is, therefore, a needed remedy. The amendment would secure in law throughout the country the basic truth known to reason that marriage is the union of one man and one woman. Preserving this elemental truth is necessary for the good of society at large and for the good of children who deserve the love of both a mother and a father, neither of whom is expendable. Indeed, marriage is the only institution that unites a man and a woman to each other and to any child conceived of their union. Federal court opinions that essentially redefine marriage to be merely a state recognized arrangement of intimate adult relationships ignore the truth about marriage, which deserves the highest protection in law.

I am, therefore, very pleased to support the Marriage Protection Amendment and urge your colleagues to join H. J. Res. 51 as cosponsors. Thank you for introducing in the House of Representatives this needed resolution to amend the U.S. Constitution.

Make no mistake about it, amending the Constitution is difficult. We have before us not just the political work of passing and ratifying an amendment, but the much more important work of converting our culture.

One reason that the abortion fight has created bitterness and has taken so long is that pro life people have concentrated more on the politics than conversion.

Conversion must begin with us. By that I am referring to our own sexual behaviors, divorces and indifferent child rearing.

I’ve said repeatedly that the first and most important thing we must do — emphasis must do — is protect our own children from the corrosive effects of this post-Christian society in which we now live.

We need to protect our children, and at the same time be unafraid to go forward and speak the truth ourselves. For far too long, adults have protected themselves and thrown their children into the front lines of our trash culture. We have to reverse that, and we need to do it immediately.

Here is a copy of Cardinal Corleone’s letter: 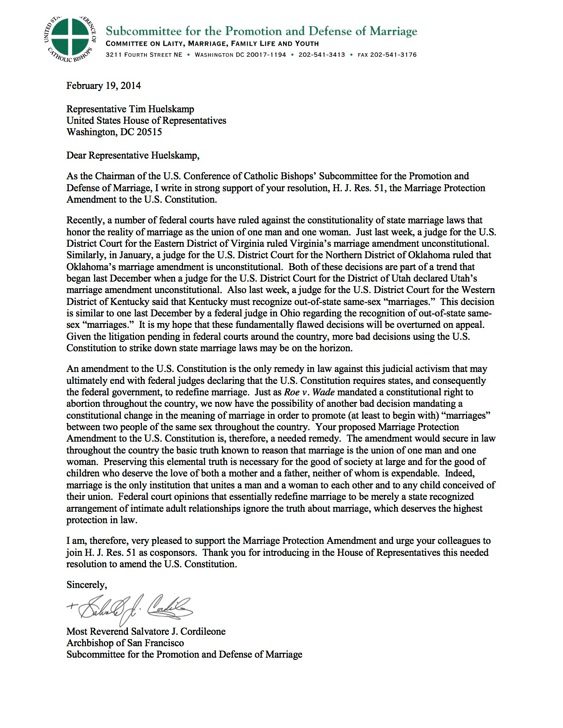 February 24, 2014
And So It Begins: The Push for Polygamy
Next Post

February 25, 2014 Will Arizona Let the Money Do the Talking?
Recent Comments
30 Comments | Leave a Comment
Browse Our Archives
get the latest from
Public Catholic
Sign up for our newsletter
POPULAR AT PATHEOS Catholic
1

Cancel Culture? Or Actions and Consequences?
On the Catholic Beat
Related posts from Public Catholic

St. Ethelbert - A Leap of Faith and...
Ethelbert was a pagan King in a territory of south-east England in...
view all Catholic blogs
What Are Your Thoughts?leave a comment

30 responses to “Getting Real: The Marriage Protection Amendment”