Unless we manage to tie ourselves in knots, this is the last day of session.

I will still be the representative for House District 89 until November 16 of this year. People will be able to call me “Representative” all the rest of my days. Unless I sign up as a lobbyist (don’t hold your breath) I have privileges of the floor of the Oklahoma House of Representative so long as I live.

We’re a small club, and parts of that clubbiness never go away.

At some point today, I will push the button to make my last vote.

I may have already made my last speech. Probably so. But then again, I may find something today that I want to debate. I don’t plan these things, so I don’t know for sure.

There is an energy on the House floor when it is in session that is hard to describe. You walk through those doors and there’s a hum of people working, talking. It has an urgency, even when they’re joking around, that you don’t find anywhere else. Their nerved up emotions hit you almost like a charge of electricity.

I’m so accustomed to this that I don’t feel it anymore. I remember it from when I was new.

On busy days, the rotunda outside the House is so full of lobbyists that it’s difficult to get out of the House to the rest of the building. It’s like weaving through a crowd at Wal Mart on Black Friday. If you’re a House member, lobbyists will interrupt your progress repeatedly to say “Hello Representative,” or some such. People who want to talk to you about this bill or that will stop you as you walk out.

Sitting on the House floor is a bit like being a fish in the proverbial barrel. We’re at the bottom of a huge room, with galleries surrounding us on all four sides. The press is in their own gallery at the top of all the others where they can look down onto us and peer into our laps. They can see what we’re reading and what we’re doing.

That’s why I sit at the back of the room. With my seniority, I can sit where I want. I chose the last seat, the one right next to the door, because the press has to turn their cameras downward in a deliberate fashion to get me. I don’t like being on camera for hours at a time.

I’m extremely tired today. It’s been a long week. I am also unsettled and sad about a vote that I had to cast last night. I wanted to end my time in the House on an up note with the people I work with. Instead, this divisive vote has created acrimony and angst. I am, as so often happens, the odd one out. Now, after sleeping on it, I’m thinking that I should have gone in-your-face with them and helped kill this evil bill. That is the hell of this job in a few sentences.

I’m going to write about the issues surrounding that particular vote in much greater detail later because it goes to the core responsibilities of representative government. It is a case study in how government which is dominated and run by special interests — in this case corporatist interests — fails its citizens, even in the most obvious areas of public safety. It is also a case study in how weak legislators who won’t fight their own party for what’s right end up failing the people and endangering their constituents’ lives.

Now that I think about it, this is a good way to end my 18-year legislative career. It is a highly appropriate way.

I have rules about what I do in office. Two of the most important are: I don’t kill people, and if I can do something that will save lives, I will do it. The cost to me doesn’t count in this equation.

Those little rules of mine got me into what people here in Oklahoma call “a Wewoka switch” last night. They forced me to vote for a horrifically evil piece of legislation that came about because of the dominance of money interests in our state government, money interests who will kill kids to squeeze the last dime out of government for themselves.

In the process, I ended up at odds with people I care about on this last day of my time on that floor as a voting member. And now, I’m thinking I was wrong, that my vote will be used to empower the corporatism that is bankrupting our state and impoverishing its people and leaving our children’s lives forfeit.

How could anything be more appropriate than that? If there is a better way to describe the hell of this job, I don’t know of it.

It’s been my meat and bread for years. Why shouldn’t it be my last legislative supper as well?

I am feeling nostalgic as I write this. But I do not have one shred of desire to come back to that House floor next year and do it again. There is not one atom in my body, not one thought in my head, not one lingering bit of longing to be on the hot seat and make any more of these gut wrenching, wrong and wronger/who-do-we-hurt/rob-from-the-poor-to-give-to-the-rich decisions.

There’s a hum when you walk onto the House floor. The charge of emotions hits you like electricity. Nothing I’ve ever encountered anywhere else comes close to the experience of legislating.

I am feeling nostalgic. This is a big passage for me. A huge change in my life. I wouldn’t be at all surprised if I end up crying at some point, simply from the weight of emotions and weakness that comes from being so tired.

I am not looking forward to walking out of those doors for the last time as a legislator. That will be a wrench.

But I am looking forward to the life beyond those doors. I need to pray this through, but the broad strokes of what I’m going to do are already in front of me.

I am so ready for this change.

May 22, 2014
News Flash for Vatican Mistresses: If He Wanted to Marry You, He Would.
Next Post 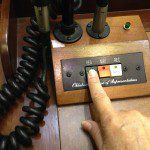 May 24, 2014 Last Vote
Recent Comments
15 Comments | Leave a Comment
Browse Our Archives
get the latest updates from
Public Catholic
and the Patheos
Catholic
Channel
POPULAR AT PATHEOS Catholic
1

AppleTV+'s 'The Tragedy of Macbeth': Denzel Washington Is...
Streaming now on AppleTV+, writer/director Joel Coen's stark, atmospheric version of the...
view all Catholic blogs
What Are Your Thoughts?leave a comment