Archbishop Coakley Calls for Prayer, Procession and Benediction in Response to Black Mass

My religious leader, Archbishop Paul Coakley has called for a season of “prayer, procession and benediction” due to the scheduled black mass here in Oklahoma.

Self-identified satanists have held a black mass in the Oklahoma City Civic Center for the past several years in a row. Last year, no one — zero — turned out for their little show. Hopefully, Okies will continue with this no-response this year.

Archbishop Coakley has called for Oklahoma 250,000 Catholics to join together in prayer, processions and attendance at Eucharistic Adoration in response to this black mass.

I am sure that your local parish will have events. Archbishop Coakley invites all of us to join him for prayer and a holy hour on September 9, at 3pm at St Francis of Assisi Church at 1901 NW 18th. That is the day of the satanic mass.

For my part, I would encourage Okies to participate in all these events. I sincerely hope that St Francis overflows that day.

There are also a few things I would ask you not to do:

1. Don’t obsess over this. Satan is alive and well and walking our world on two feet. If you doubt that, just watch the news. A black mass is just him, taking off the clown face and coming out.

2. Don’t engage with the satanists. Don’t talk to them or go around them. Stay away.

3. Ditto for the black mass. This is not entertainment. It is evil. Stay away from it. Do not go down there.

5. Pray and trust Christ. You cannot fight Satan, so don’t try. Let God do your fighting for you.

One thing we need to remember: The reason everyone from, atheists to satanists, attacks the Catholic Church is simple. The Catholic Church teaches the whole truth of Christ. Trying to make a mockery of the mass is a back-handed acknowledgement that the mass is real, the Eucharist is the presence of Christ. Satan hates Jesus. He also hates us. Mocking the mass is just the venomous spite of the loser in the great cosmic war. 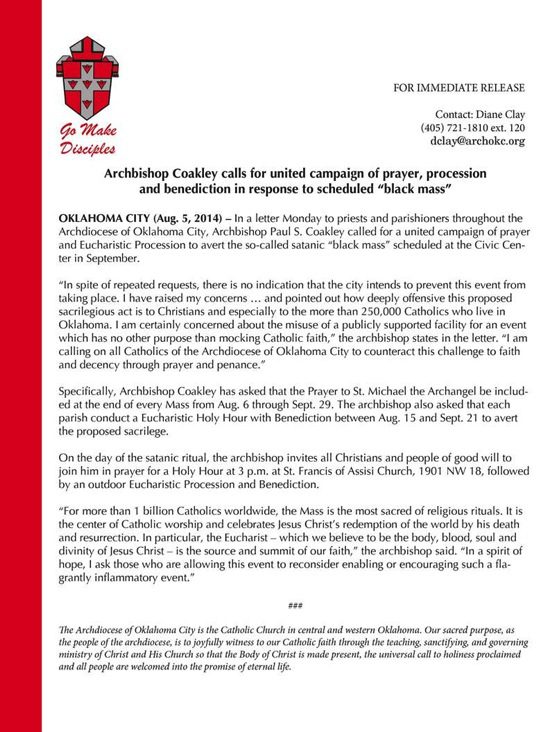 August 5, 2014
I Didn't Know "Trickle Down Economics" Was in the Ten Commandments.
Next Post

August 6, 2014 Ebola. The Family Disease.
Recent Comments
7 Comments | Leave a Comment
Browse Our Archives
get the latest from
Public Catholic
Sign up for our newsletter
POPULAR AT PATHEOS Catholic
1

Uncreated Energies. Part Five: Partakers of the Divine...
God reaches out towards us, indeed engages us so that we can...
view all Catholic blogs
What Are Your Thoughts?leave a comment

7 responses to “Archbishop Coakley Calls for Prayer, Procession and Benediction in Response to Black Mass”