Archbishop Paul Coakley filed suit today against the group which has said it will conduct a “black mass” at the Oklahoma City Civic Center.

The basis for the lawsuit is that the group has illegally obtained property belonging to the Roman Catholic Church, i.e., a Consecrated Host.

There are a number of statutes which might apply to this situation. According to an article in National Catholic Reporter, a “black mass” involves a naked woman lying on the “altar,” which has a certain symmetry since their “priest” is a convicted sex offender. Since Oklahoma has laws against public nudity, the Satanists claim they are going to forego that, along with using excrement and urine.

Here is a sampling of other statutes which might apply to the situation. These are all from Title 21,  criminal law. I’m sure there are many others under tort law.

A.  Every person who buys or receives, in any manner, upon any consideration, any personal property of any value whatsoever that has been stolen, embezzled, obtained by false pretense or robbery, knowing or having reasonable cause to believe the same to have been stolen, embezzled, obtained by false pretense, or robbery, or who conceals, withholds, or aids in concealing or withholding such property from the owner, shall be guilty of a felony punishable by imprisonment in the State Penitentiary not to exceed five (5) years, or in the county jail not to exceed one (1) year, or by a fine not to exceed Five Hundred Dollars ($500.00) or by both such fine and imprisonment.

2. Larceny:
“§211701.  Larceny defined.
Larceny is the taking of personal property accomplished by fraud or stealth, and with intent to deprive another thereof.”
3. Crime against a house of worship (as an Accessory to the crime).
“§21-1765.  House of worship or contents, injuring.
Any person who willfully breaks, defaces, or otherwise injures any house of worship, or any part thereof, or any appurtenance thereto, or any book, furniture, ornament, musical instrument, article of silver or plated ware, or other chattel kept therein for use in connection with religious worship, shall be guilty of a felony.”
§21173.  Accessories defined.
All persons who, after the commission of any felony, conceal or aid the offender, with knowledge that he has committed a felony, and with intent that he may avoid or escape from arrest, trial, conviction, or punishment, are accessories.
§21901.  Blasphemy defined.Blasphemy consists in wantonly uttering or publishing words, casting contumelious reproach or profane ridicule upon God, Jesus Christ, the Holy Ghost, the Holy Scriptures or the Christian or any other religion.
§21902.  Serious discussion not blasphemy.If it appears beyond reasonable doubt that the words complained of were used in the course of serious discussion, and with intent to make known or recommend opinions entertained by the accused, such words are not blasphemy.

This is the press release Archbishop Coakley put out about the lawsuit: 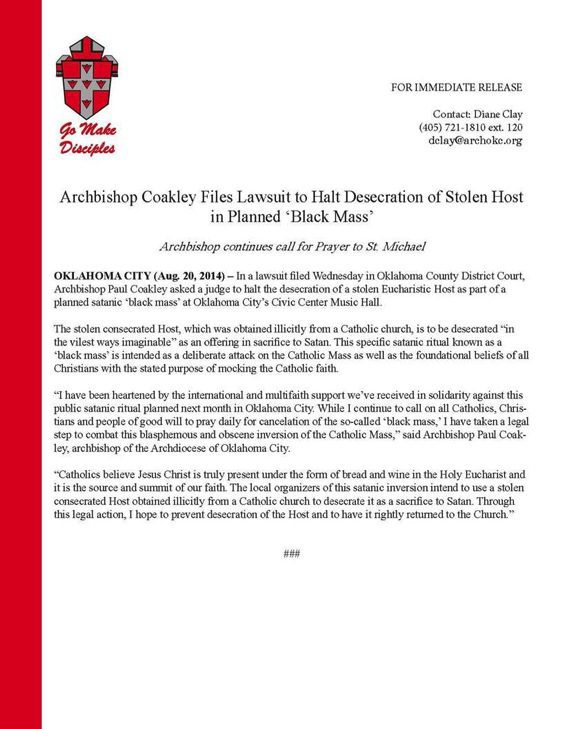 50 Years of Catholic History During My Life:...
50 Posts ago... We put up our first article at Catholic bard....
view all Catholic blogs
What Are Your Thoughts?leave a comment