Go Look in the Mirror. That is the Only God You’ll Ever See.

Go Look in the Mirror. That is the Only God You’ll Ever See. March 14, 2015 Rebecca Hamilton

Decades ago, not long after my conversion, I had a discussion with an atheist friend of mine.

This friend was from the time when just about all of my friends — including me — evinced a militant disregard for things Christian.

I didn’t know it at first, but that conversion to Christ was going to change everything in my life, including my relationship with people who had been as close to me as family. One by one and despite everything I could do to avoid it, I would lose them all. Worse, the same friends that I loved, truly loved, would become my worst enemies. They would do everything they could to destroy me.

This particular friend didn’t do that. But the friendship, the easy, warm trust between us, was gone almost as soon as I began to follow Christ. I tried my best to keep my new faith low key. I did everything I could to continue to blend in with my old crowd.

But … you’ve changed, this friend said one day.

It was an accusation, and I cringed inside, not understanding this “change” that he saw, even when I was doing my best to hide it. I did not realize in that moment that he had just unwittingly given me the greatest compliment he could.

He saw Christ in me. Despite everything I could do to pretend that nothing had happened and hang onto all my old friendships, I was changed. And this man saw it.

That comment began the slow unraveling of my old life as an unbeliever. I do not mean that it began my conversion. That had already happened. It was the start of the end of previous relationships with people who lived in the world of unbelief.

But … you’ve changed, he said. And it was true.

This change began to resound in all these relationships with my old crowd. I never preached to them. I didn’t even talk about Christ to them. But I had changed on a fundamental level, and they were like ring wraiths sniffing me out.

This particular friend was the only one to address the change directly and then to lay into me at the root of that change. He knew, without my telling him, that I was now a Christian. And he began a program of reconversion.

Once, in one of our many arguments, he spat out a couple of sentences that I will never forget.

Go look in the mirror, he said. That is the only God you will ever see.

That comment was the apex of his arguing, and the end of our togetherness as people. It wasn’t the comment itself  that did it. It was the unbridgeable gap between us.

We never formally stopped being friends, but we did stop spending time with one another. It was too fraught, too uncomfortable. We had the memory of a friendship, nothing more.

He died of a heart attack a few years later. There were jokes about his vehement unbelief in the many eulogies at his memorial service. This was a man who understood friendship. The memorial service was a crowded event, the building filled to overflowing.

I walked out, gripping my husband’s hand, hoping that in those last extremities my old friend had finally turned to God.

Did he go to hell?

I said it aloud when we got back to the car. Was he dead, really, eternally dead and gone to hell? My passionate, crazy friend — had he doomed himself to eternal death?

My husband was silent for a moment. Then, he reached out and squeezed my hand.

I changed again after that. My friend’s death shook me out of my somnambulance. I realized that being quiet about Jesus was the cruelest thing I could do to the people around me. I called quite a number of my old friends and told them directly that I did not want them to go to hell. I pleaded with them to change.

One of them changed, began following Christ and follows Him to this day. Otherwise, those calls had no effect.

You just don’t worry about me, one of them said, summing up the reaction from all of the rest.

A few years later, someone I knew and had crossed swords with was dying of cancer. This person and I barely spoke and when we did, it was barbed.

I picked up the phone and called him. Are you right with God? I asked him.

My friend’s death has taught me that there is never a wrong time to try to tell someone about Jesus, and there is never a right time to let another person slide into eternal death while you stand politely by and say nothing.

I read a headline before I began writing this post saying that 7.5 million Americans have abandoned their faith in Christ in the last year. I didn’t read the story, but I would assume that it was based on statistics from a survey of some sort.

There are a lot of reasons for the rising apostasy, but I think that the heresy of salvation through politics is one of the primary factors.

Many Christians have become besotted with a political Christianity where voting right and joining the correct political party has replaced following Christ. They have removed Jesus from Lordship of their lives and replaced him with an angry and unthinking devotion to their political party.

Go look in the mirror. That is the only God you will ever see.

Seven point five million Americans evidently decided to turn their backs on eternal life and plunge themselves into eternal death while we were barking at one another over whether or not the priest wears a stole when he hears confessions and is the Church too “feminized” and which political party is the right one for Christians.

Let me tell you something. If Jesus Christ is truly the Lord of your life, it does not matter which political party you are in or whether or not the mass or church service you attend is sufficiently to your liking.

It does not matter because wherever you are, you will do His will. If people aren’t looking at you accusingly and saying You’ve changed, then something is wrong with your relationship with Christ.

Let me turn my friend’s comment around. When you look in the mirror, do you see your God?

Sin is one thing. We all sin. This is why we have confession. But if you are one of those many people who are trying to cut your faith to fit your politics, if you are trying to shear the teachings of Christ down to slip them nicely into the folder where you keep your political handouts, then you are, no matter how often you go to Church or how much you proclaim yourself a Christian, in rebellion against God.

Bearing witness to the Gospel with our lives is the universal Christian vocation.

But it doesn’t end there.

We are also called to bear witness to Christ with our words.

Ask yourself this: Have people abandoned the Church because of you? Have you driven them away with your peculiar and particular insistence on a vengeful reliance on your version of what a Christian should be? Has your unbending self-righteousness made them feel that the Church is the last place on earth they would go for love and forgiveness?

Have people come to Christ because of you? Have they felt safe to tell you of their failings, to share their doubts, to trust you with their darkest secrets? Have they experienced the love of Christ in you and begun to follow Him because you allowed yourself to be a conduit of His grace in their lives?

What fruit have you born with your followership of Christ?

When you stand before God, will lost souls point at you in accusation and say He or she never told me about Jesus.

Or worse, will they say, He or she was so angry and so self-righteous that I thought their Jesus was the devil?

How many souls will point to you and say He or she was the spark that led me to Christ?

The answer to those questions begins with another one. When you look in the mirror, do you see a beloved child of God who can trust His love to forgive their sins? Do you see a sinner who does not need to be afraid before God; someone who is forgiven and who is grateful for that forgiveness?

Do you look in the mirror and see the true lord of your life and the only god you will ever know? 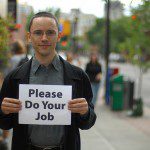 March 13, 2015
So What's this "Agreement" with Iran that's Got Everybody in an Uproar?
Next Post 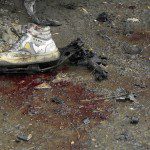 March 16, 2015 14 Dead in Terrorist Bombings of Pakistani Churches
Recent Comments
62 Comments | Leave a Comment
Browse Our Archives
get the latest from
Public Catholic
Sign up for our newsletter
POPULAR AT PATHEOS Catholic
1

Human DNA Enthroned as God
Human DNA ascended into heaven and is seated at the right...
view all Catholic blogs
What Are Your Thoughts?leave a comment

62 responses to “Go Look in the Mirror. That is the Only God You’ll Ever See.”