Is Beltway Partisanship Going to Get Us Killed?

Is Beltway Partisanship Going to Get Us Killed? March 4, 2015 Rebecca Hamilton

The president of the United States went into full bully mode before this speech saying that the invitation was a partisan move to embarrass him. In the end, he managed to embarrass himself, and at least 50 of his fellow Democrats in Congress.

First, administration operatives chewed on the invitation to the Prime Minister. We’ve been treated to all sorts of press questions because Congress didn’t consult the president before issuing the invitation. There was tut-tutting about the prime minister trying to affect American policy with this speech.

That last complaint seems a bit coy considering the amount of lobbying that is thrown at Congress by foreign interests every day. That lobbying is hidden from the American people, but its affect on foreign policy is bound to be enormous. This speech was out there where we could all hear it. It brought we the people into the discussion, and that, I think, is the real reason the president was so irate.

When efforts to force Congress to withdraw the invitation failed, the president went to work on Democratic members of Congress. Most of the Ds who sit in the United States Senate and the United States House of Representatives had the good sense to show up for the speech. They behaved like representatives of the people dealing with serious issues. However, at least 50 of them staged a grade school boycott.

This boycott accomplished nothing good. It’s primary affect was to pour gasoline on the partisan fires in our government and deepen the disrespect in which the American people hold Congress. It revealed just how bizarre and reality-deprived the thinking of these people has become.

I realize that they are inside a pressure cooker and that the whole world outside that pressure cooker is just a figment of memory to them. But their behavior about this speech, as well as the behavior of the entire Congress on most other issues, reveals more than a little bit of delusional thinking.

Did they really think that this puerile plan to boycott the speech of a head of state of a friendly nation was a good idea? Have they no sense of responsibility to the American people and our need for at least the appearance of a sane and functioning government?

We’ll get to the particulars of the speech itself in another post. For now, I want to address this partisan flap over the fact that the speech was made.

The first question is a simple one. Was the invitation to Prime Minister Netanyahu a partisan political move on the part of Congressional leaders?

Rather than answer that, I’ll ask another question: Does Congress do anything that is not a partisan political move?

The next questions are, was President Obama within his rights to throw such a hissy fit about the invitation, and were the Democratic lawmakers right to boycott the speech?

The answer to those questions are no, and no.

Congress does not need the president’s approval when it invites someone into its house to speak. Congress can — as should be abundantly clear, after this speech — do that anytime it wants.

President Obama was not only out of line, he looked petulant and weak, pulling out all the stops to derail this invitation.

The Democratic members of Congress who chose to boycott the speech revealed themselves as blind party loyalists rather than representatives of the people. There is no requirement for anyone to agree with what Prime Minister Netanyahu said. Neither he nor President Obama has a vote in either the House or Senate of the United States.

As representatives of the people who should be engaged in making decisions about these serious issues, members of Congress have a responsibility to listen to the head of state of an affected nation who is also our ally. This speech was an opportunity, both for them and for the American people, to think more deeply about our position in that part of the world.

These members of Congress boycotted the speech because of party politics. I don’t have the words to appropriately characterize how shallow and callous that is.

This was another clash in these politician’s dangerous and absolutely vicious game of king-of-the-Hill. What’s sobering is that American foreign policy in this tinderbox part of the world appears to fall into that same category. The terrifying question of a nuclear Middle East with its deranged politics and mass murderers without limits seems to be just another battle in the great Congressional game of using the power of their elected offices to win the next election for their political party.

Yesterday’s boycott of Prime Minister Netanyahu’s speech by at least 50 members of Congress is not just another symptom of this partisan illness. It is an indication that the business of constantly jockeying for the next election has reached a lethal level.

Prime Minister Netanyahu’s speech exposed the fact that the partisan gamesmanship has advanced to the point that it now controls what our Congress does in matters that concern issues such as nuclear war, with its potential for global annihilation. We are looking at an on-going holocaust in the Middle East. Prime Minister Netanyahu speaks for a tiny nation that clings to existence on the edge of a region of the world that has, quite frankly, gone mad.

The partisan wars are so out of control that our elected officials now use issues that could threaten the survival of much of the human race in their game of king of the Hill. The question of a nuclear Middle East is not a parlor game. Make no mistake about it, the issues that Prime Minister Netanyahu raised in his speech are issues of survival, and not just for Israel.

I am not saying that I agree with everything Prime Minister Netanyahu said. He is the leader of another nation. His interests do not coincide entirely with those of the United States. But he raised important issues that should be discussed in Congress and throughout these United States.

They should have done it because we the people have a need to know more about American policy in the Middle East. Too much of it is cloaked and kept away from the American people. It’s a sad day when we need the speech of a foreign head of state to bring the people of this nation into the conversation. For these reasons, I don’t have any problem with the invitation beyond the partisan motivations behind it.

We really need to demand better of our elected officials. We need more transparency in our government, more open discussion of real issues. We also need and deserve public servants who serve the public, not partisan brinksmanship.

If this country was not so strong, it could not have survived the past decades of bad governance. However, it has been greatly weakened by a long series of bad presidents from both parties and the abdication of responsibility by Congress.

If beltway partisanship replaces the good of America among our elected officials, even in matters this grave, it is going to get us killed.

Here’s a list of those who have admitted they took a powder on the speech. It’s from CNN:

At least 50 Democratic House members and eight senators who caucus with the Democrats said in recent weeks they wouldn’t attend the speech, many in protest to a move that they say is an affront to the president.

Rep. Charles Rangel (N.Y.) had originally said he would skip the meeting, but changed his mind on Tuesday.

A full list of the Democrats who confirmed they missed the speech follows: 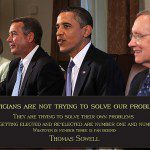 March 4, 2015 Netanyahu's Speech: Is Beltway Partisanship Going to Get Us Killed?
Browse Our Archives
get the latest from
Public Catholic
Sign up for our newsletter
POPULAR AT PATHEOS Catholic
1

What's Behind Trump's Sudden Support for Trafficking Victims?
Why is Donald Trump suddenly so concerned about victims of human trafficking?...
view all Catholic blogs
Copyright 2008-2020, Patheos. All rights reserved.