I’m writing this post for one purpose. That purpose is to talk about what so many of you evidently need to talk about: Gun control. It’s a big issue for these times, one that isn’t going to go away. We really do need to discuss it at Public Catholic, at the intersection of faith and public life.

I’m going to delete the posts that are incoming over there. Please move them here.

The issues are black and white to everyone, on both sides of the argument. As usually happens in this time of terminal personal self-righteousness and culture war, everyone thinks the people on the other side of the debate are unreasonable demagogues with the consciences of serial killers.

I think — for what my thinking is worth — that both sides are trying to deal with the intractable problem of evil, manifesting itself in human actions, without acknowledging that this is what they are dealing with.

I am personally opposed to limiting second amendment rights beyond a few reasonable legal codicils. As usual, I have the votes to prove it.

But that does not mean that I think that people who favor gun control are acting out of ignorance or a craven desire to limit American freedoms. I think that they are good people who are focusing on a different set of dangers than I am.

That is a key point in this discussion: Both sides of the debate are advocating a dangerous position, and both sides refuse to see that their position is in fact a dangerous one to take. There are no easy, harmless solutions to the problem of the human propensity to murder other humans.

Among the dangers inherent in gun control is that it is first of all a cavalier approach to limiting a basic Constitutional right. It ignores the increase in the reach of government power and oversight of Americans that would be involved in such a change in the laws.

America is not Europe or even Canada. We are a heavily armed people. Here in Oklahoma, just about every home has at least one gun and most homes have several. Most Okies not only have guns, they know how to use them. They do use them, for target practice and hunting.

I’m pretty sure that this same situation prevails throughout most of the South and the Southwest. I wouldn’t be surprised if it didn’t also exist in other parts of the country, as well. The political realities of gun control legislation seem to indicate that there are a lot of Americans out there who keep and bear arms.

The bureaucratic measures of filling out forms and undergoing checks of various sorts that office holders keep proposing would not dent the gun violence and mass killings we’ve seen. Ideas about limiting access to ammunition have been floated. But the political realities of that idea are probably even more extreme than those for gun control.

Not only that, but a lot of Okies are perfectly capable of making their own bullets. They do it now, as a hobby. I imagine that’s true of other, non-Okie folks, as well.

Removal of guns, such as has happened in other countries, is where this argument has to go. That would result in draconian government intrusion into the lives of otherwise law-abiding citizens. It would also be even less effective than Prohibition was. The resistance from the public is not something I want to contemplate. Not only that, but, once again, Okies are perfectly capable of making their own guns, as are a lot of other people, I’m sure.

We need to be careful about making criminals of law-abiding citizens as a means of getting at a few individuals who are in the grip of a killing fever that the rest of us can’t explain or understand.

Also, mass murder is not just a function of guns. Fertilizer and gasoline will make a bomb. You can kill many innocent people and maim many others with it. You can blow up big buildings and murder little children with it. Rwanda suffered a genocide that slaughtered hundreds of thousands in a short time with clubs and machetes.

We deny the power of human ingenuity if we seriously think that limiting access to a category of inanimate objects will stop these mass murders.

It is a simple historical fact that we did not suffer these repeated mass killings earlier in the history of this country. Guns were even more ubiquitous in our past, but the tragedy of one or two people randomly killing strangers, co-workers or fellow students for no apparent reason is a relatively recent phenomena.

It’s the people themselves who have changed. And this is a result of societal breakdown that evidently predicates toward the creation of psychopaths and rage killers.

This leads me to the dangers of opposing gun control. People are being killed. We know that what happened in Charleston has happened before. We know that it will happen again. And again.

The trouble with this entire debate is that it is about inanimate objects which are only tools, rather than the tool wielders. I think this is because we do not want to face what we have wrought.

These killings are not about mental illness. Mentally ill people, like guns, have been with us long before these killings started. They are also not about poverty, or racism.

While one murderer may kill a school full of little Amish girls and another murders black people at a prayer meeting, their brothers in murder may decide to go on a military base and start shooting, or to their place of employment or even to the local McDonalds. They may, as I remarked earlier, build a bomb, put it in a truck and park the truck under a day care center.

The one constant is that the murderers are nearly all young men. Most of them are from privileged backgrounds. They are not hungry, battered, sexually molested or on drugs. We say they are mentally ill, and some of them may be. But others clearly are not. All of them have sufficient wits to plan and commit what are fairly complicated acts of mass murder.

This problem we are dealing with is a symptom of a larger societal sickness. And that is what we don’t want to face.

The entire gun control debate is ruse of sorts that lets us believe in the lie of simple solutions and one-off fixes. Focusing on gun control allows us the luxury of avoiding the deeper discussions of what has gone wrong in our society that, after around 150 years of gun ownership without these mass murders, has been plunged into the hell of seeing them happen over and over again.

That discussion, which would take us into the subterranean world of the things we dare not say, is one that we are willing to accept mass murder and maybe even give up our freedoms to avoid.

But it is the only discussion that has a hope of yielding ideas which might actually address the problem. 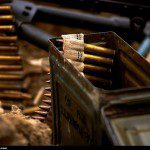 June 23, 2015
You Can Read the Text of Pope Francis' Comments about Arms Dealers Here
Next Post 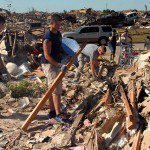 June 24, 2015 And While We're At It, Let's Talk Global Warming
Recent Comments
17 Comments | Leave a Comment
Browse Our Archives
get the latest from
Public Catholic
Sign up for our newsletter
POPULAR AT PATHEOS Catholic
1

Thanks For Giving Us More COVID, SCOTUS
In a decision released late at night, the Supreme Court lifted restrictions...
view all Catholic blogs
What Are Your Thoughts?leave a comment