Rand Paul’s Math is the Same as Mine. Do You Know Anything that Would Change It?

Rand Paul’s Math is the Same as Mine. Do You Know Anything that Would Change It? July 31, 2015 Rebecca Hamilton

Turns out his math on the vote is the same as mine. The vote in question is a vote on cloture, which would limit debate and stop a filibuster against the bill. Cloture requires 60 votes.

According to Senator Paul, 52 of the 54 Rs will vote for cloture. I’ve read that Republican Senator Collins of Maine, and Senator Kirk of Illinois plan to vote against defunding Planned Parenthood.  What that means is that the Ds are going to have to cough up 8 pro life votes to pass cloture and allow the bill to come to a vote of the full Senate.

How many pro life Ds are there in the United States Senate? By my count, we have 4 who have mixed pro life records. They vote pro life a lot of time, but not on every, single vote. Perhaps the most prominent of these is Senator Casey of Pennsylvania, who has said that he will not vote to defund Planned Parenthood. This is consistent with his previous votes on the issue.

I’ve been over the numbers several times, and I can’t get to 60. If the Rs can change both their “nos,” and pro life Ds can pull 6 votes out of their hat, then we’re home.

Public Catholic readers are often active in the pro life movements in their local communities. Do any of you have better intel on how this vote is like to come down? Have you talked to your senators’ offices and gotten information that there’s a D or two out there who might switch and vote with us? 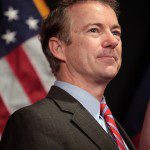 Abuse, the Rosary, and an Old-Fashioned...
Steel Magnificat
Related posts from Public Catholic

Becoming Velveteen
We've spent the past seventeen or eighteen months in relative isolation.  No...
view all Catholic blogs
What Are Your Thoughts?leave a comment

7 responses to “Rand Paul’s Math is the Same as Mine. Do You Know Anything that Would Change It?”