Judge Roy Moore’s Religious Apologists Do Not Speak for God

How does an adolescent who has been sexually abused by an adult square the circle of Christian indifference to what has happened to them?

What does a child — or an adult, for that matter — who has had their humanity ground into the dirt by the callous cruelty of another person who was more powerful than them keep their faith when their faith leaders abandon and even turn on them to support their attacker?

The simplest and easiest connection for them to make is to blame Jesus. If His preachers and priests, people who claim without dissembling that they speak directly and perfectly for God Himself, support the attacker in his (or her) soul-destroying perversions, then surely God is also on the side of the rapist, and if God favors rape, then God Himself is the same as the devil.

What, then, is the point in following such a monstrous being as this god who loves rape and sexual destruction of the weak at the hands of those who wield power? If God Himself is monstrous and cruel, then what is the point of following Him? It would be best to get as far away from such a God as is possible, to run run run in the opposite direction from Him.

As for His preachers and priests, the obvious conclusion for such an abandoned child would be that they have nothing to say to you if you have suffered sexual assault. They have shown by their every action that what happened to you is not just a nothing to be disregarded, but that it is also ok, alright, and totally unimportant when balanced against the truly important considerations that they place ahead of it in their reckoning.

I recently read an article which described the supposed conundrum of Evangelical religious leaders because one of their false idols of politics, in this case senate candidate Roy Moore, has been accused by five women  of sexual impropriety toward them when they were — get ready for this now — 14, 15, or 16 years old and he was a grown man. Not only that, but it appears he had a habit of trolling young girls at malls and one of his work colleagues has come forward to state categorically that “everybody knew” the judge, ie, candidate Moore, “dated” young girls and they thought it was creepy.

So what, exactly, is the moral conundrum in which these so-called religious leaders, these self-proclaimed spokesman for the Lord God Almighty, find themselves. It’s simple, really.

They are not men and women of God. They are political operatives who use their religious offices to barter a position for themselves at the seats of power. Their power base is faithful Christians who blindly follow them in political matters down the yellow brick road of the political heresy.

Their discussions of this situation focus on whether or not the women are credible and how “serious” the political consequences would be to shuck this candidate. They’re all about the power of power politics. They have nothing — absolutely nothing — to say about the morality of the situation.

They are, in short, speaking and acting as political operatives faced with a sticky question of how to shore up the power base of their political party when it is challenged by events. There is nothing of Jesus and certainly nothing of the thinking and speaking of religious leaders and followers of Christ in either their words or their actions.

If they truly were followers of Christ rather than followers of a political party, if their God was Jesus instead of the Republican elephant, then they would not see this situation as a conundrum. The reason is so obvious that, short of standing up and doing a stadium whistle, it can hardly be more visible.

He also does not honor religious leaders who support, back, explain away and accept this behavior.

Religious leaders who are confused about sexual assault are not Christian religious leaders. They are not followers of Christ. They are, at best, confused, lost and compromised to the point that they are useless; salt without savor that needs to be spit out. At worst, they are themselves exploiters of the innocent who sympathize with the violators of other people because they secretly agree with what they are doing.

In any case, they are not Christian religious leaders. In the case of those who enact this lie on their followers in the name of political affiliation, they are leaders of the false gods of the political heresy. Their god is not Christ. Their god is the Republican elephant.

If they were true Christians who followed Christ there would be no conundrum to catch them in this matter of candidate Moore and his pedophilia. They would not have a decision to make because the teachings of Christ are not ambiguous. Rape is a form of castration. It is an emotional maiming that destroys people’s souls, that leaves them with nightmares, flashbacks, anxieties, angers and fear that never entirely go away.

Rape tells a person that they are nothing, that they are a thing, to be used, hurt and thrown away as if they were an object. When religious leaders react as if this is nothing they are putting God’s imprimatur on the hideous cruelty of rape and sexual assault. They are becoming part of the harm, and they are doing it by defaming God.

Jesus told us as clearly as He could possibly say it that we will be judged according to how we treat other people, specifically what He termed “the least of these.”

Religious leaders have pretty much ash-canned everything they ever said they believe in their efforts to provide moral cover for the amoral people we have in office. They’ve basically told us that pornography, adultery, sexual assault, sexual abuse of minors, misogyny, rape, and now pedophilia are all acceptable if they are committed by Republican office holders.

It appears that the only “real” sin these men and women of the false gods of the political heresy will admit is the sin of being a Democrat.

Democrats, in the sick moral lexicon of these religious leaders, are incapable of being moral, since they have committed the complete and unforgivable original sin of registering with the “wrong” political party. Republicans, especially Republican office holders, are, by virtue of their Republican-ness incapable of sin.

The question arises: did these religious leaders ever believe in Jesus in the first place? Did they ever truly believe the things they say they believe? Or was it all about politics and power, right from the beginning?

One thing it certainly was not and is not about is Jesus Christ and Him crucified. One thing I can say without equivocation is that it is not about the common good or leading people to Christ.

Theirs is an exclusionary gospel that says that only those who bow down before the political Caesar of partisan politics may enter through its gates. It is defined by lists of those who these leaders teach are not welcome at Christ’s table, by those who they teach will not find a place before the throne, and who will not be allowed to enter into the kingdom. These religious leaders do not try to convert anyone. They confine their gospel to condemnation and casting out.

These preachers haven’t gone so far as to say that rape victims and victims of sexual assault are not welcome in their little g god’s kingdom of political fealty. But it’s clear that, if they enter, it is only as damaged goods and probable liars against “good,” ie powerful, men.

In the kingdom of little g gods, it is more sinful to refuse to be exploited than to exploit, to stand up against cruelty than to be cruel. If power is on your side in this dark kingdom of false gods and political expedience, then god is not just on your side, you become god. You can say that evil is good and the religious chorus of your political party will chant “amen and amen, so be it.”

How does an unsophisticated child, someone who just believes in Jesus the way a child believes, who understands Him the way a child understands, manage to square this horrible circle? What choice do they have except to decide to survive by turning their back on this Jesus the preachers say hates them, or to allow themselves to be plowed into the dirt?

Leave the church and live or stay in the church and die emotionally. That is the choice that false religious leaders of the political heresy place before victims of sexual assault. Healing, love, community — Jesus — is not in their preaching and teaching anywhere.

I am writing a whole book that addresses these questions. But for now, I will simply say that these religious leaders of the political heresy have nothing to do with Jesus Christ. They are political operatives and charlatans. If they don’t change, they are most likely going to end up in hell.

My message to victims of sexual assault who are witnessing this travesty of true Christian leadership is to know one thing: These men and women of the political heresy are not speaking for Christ. They are speaking for the Republican Party. They are not ministers of the Gospel. They are political operatives.

Do not judge either yourself or Jesus Christ by their words.

As for the “religious leaders” who are so caught in this conundrum of trying to appear Christian while following other gods, I can only say Shame on you, Mr Preacher Man. Shame. Shame. Shame.

May 13, 2017
Turn to Jesus Christ, Who Gives Life Its Meaning
Next Post 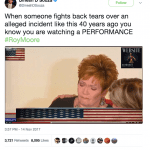 November 16, 2017 If You're Been Sexually Assaulted by a Powerful Man, It's Your Fault.
Recent Comments
19 Comments | Leave a Comment
Browse Our Archives
get the latest from
Public Catholic
Sign up for our newsletter
POPULAR AT PATHEOS Catholic
1

Saint Chad - The Importance of People
How much do you think the people you surround yourself with will...
view all Catholic blogs
What Are Your Thoughts?leave a comment