McCarrick and Rother: The Tares and the Wheat Co-Exist in this World

I had planned to write a rather scathing column today.

I’ve been on my last nerve regarding Christian clergy of every denomination ever since so many of them came out to attack the victims and back the child molester in last year’s election to replace Attorney General Sessions in the United States Senate. That repudiation of the Gospels on the part of so many religious leaders and their weak-headed followers sent me off in a crisis of faith that rivaled the one that set me on the anti-God phase of my life back when I was 18 years old.

The difference this time is that I have no doubt about Jesus and His love for the victims of these heinous crimes. I know that rape/sexual assault/child molesting victims are Christ crucified, standing right before these self-aggrandizing religious leaders, and that the religious leaders are, by their mistreatment of them, crucifying Him all over again.

That is what we are witnessing when our Catholic bishops fail so abysmally in their handling of clergy sexual abuse. We are watching them crucify Our Lord in the name of the Church. They are the Pharisees.

The Pharisees who murdered Our Lord did not need to know that they were murdering God in the flesh to understand that they were sinning. Their own laws, and the natural law that is written in every human heart, told them so.

Before I went to mass yesterday, I had every intention of using the facts I’ve just recited as a jumping-off point to write a column that’s been in my heart for months. I had formulated a good bit of the verbiage in my head and I was ready to write.

Then, as often happens, I went to mass and things inside me changed. Yesterday we honored Blessed Stanley Rother, an Oklahoma farm boy who became a martyr because he loved the flock that God had given him.

Our pastor knew Father Stanley Rother. He explained that “Stan” as he called him, fell in love with the Mayan people of Guatemala. Blessed Stanley Rother, who famously said, “the shepherd cannot run,” died for love of the people to whom he ministered.

Pastoral love is a powerful force for good in this world. It is a love that can heal broken people and lift them out of the confining misery of their lives and into the expanse of life abundant that Jesus came to give us.

Priests are not mindless conduits of grace via the sacraments. They aren’t — or they shouldn’t be — mere sacrament dispensers. If that is all they allow themselves to be, and all we chose to make of them, then we can take the sacraments from them and ignore them in the same way that we ignore a soft drink machine.

That is the peril inherent in this deadly game of I-won’t-change-and-you-can’t-make-me that bishops have played with the laity during the decades of the on-going sexual abuse crisis. A lot of good Catholics are close to giving up on the bishops. I don’t know if the bishops themselves realize this. They are, as a group, so self-referencing and insulated that they may not know it. The danger isn’t that a lot of people are going to get up and leave the Church, although there may be some of that. The danger is that people will start treating the Church as a sacrament dispenser and the priest and bishops as irrelevant to moral judgement.

This has gone way beyond the point where we can talk about mistakes. If there ever was such a point, it is done and done.

Pastoral love is the thread that runs through many of the stories of martyred priests. From St Damien of Molokai to Blessed Stanley Rother, the story of their martyrdom and their witness to Christ is the story of a deep love affair between them and the people God gave them to shepherd.

Pastoral love is the glue that holds parishes together and binds Catholics to Rome. It is the thing that allows God to reach through a priest and into a suffering parishioner and say the thing that person needs to hear to heal.

What are pew-sitting Catholics supposed to do about bishops who do not love us? How are we supposed to convince our leaders to be followers of Christ? What can we do to make them stop preening and pick up their crosses and follow Him?

We can rage, withhold donations, stop listening to them when they speak. We can reduce the Church to a sacrament dispenser and go our own way while staying in place. Or we can get up and walk out and go elsewhere, to become our own little gods or to follow some other fallen clergy.

What we cannot do is make them change. That is all on them.

The truth is, that Jesus told us that the tares and the wheat had to co-exist in the same fields until He came again for the harvest. Bishops and clergy who ignore and disbelieve victims of sexual assault, rape, and child molesting co-exist in the world with the Stanley Rothers. They wear the same collar, but they are not disciples of the same God.

Our fate, whether we want to accept it or not, is to live in a world that is populated by monsters and saints; living, working, harming and loving side by side. We do not have the power to change any of them.

But we do get to choose for ourselves which of them we want to emulate. Love or hubris. We get to choose. We have to choose. We make that choice over and over as we live our lives, many times each day, and none of us makes the right choice every time we do it.

When Jesus comes again, He will separate the tares from the wheat and He will dispose of the tares. Heaven is coming.

But while we live in the now of this life, it is up to us to decide who we follow and what we do. The victims of rape, sexual assault and child molesting are Christ crucified, standing right in front of you. What will you — not the bishops, you — do about them? 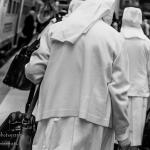 Temptation Story in “Luke”—Jesus VS Satan
Temptation!—Satan faces off against Jesus in a battle often poorly understood by...
view all Catholic blogs
What Are Your Thoughts?leave a comment

2 responses to “McCarrick and Rother: The Tares and the Wheat Co-Exist in this World”