I may not write specifically about the latest mass shooting. I’ve been dealing with the tragic death of a close family friend, a young person who should have had their life ahead of them, and that makes this terrible tragedy too painful.

I am so sorry for the lives that were taken Saturday. It echoes the shooting in a black church a few months ago. Like them, these people were gathered in their house of worship, and they were shot and killed by a man who attacked them simply for being who they were. Anti-Semitism, racism, misogyny, Islamaphobia, homophobia and all of their ilk are the devil’s handiwork.

When we play host to these things, we are opening the door of our hearts to satan and inviting him to come in and take up residence. There are a lot of people in this country who, while they didn’t walk into that synagogue and shoot anybody, have helped to create the atmosphere of lies, anger, and demagoguery that  fuels these things.

You didn’t walk into that synagogue and shoot innocent people. But if you participate in vicious on-line carrying on and if you cheer politicians and media band-leaders who lie, degrade people and engage in vicious rhetoric, you are feeding the beast that bred the mind that decided to do the shooting.

I wrote a column not so long ago in which I took a group of on-line nuts to task for talking about their desire to physically assault my fellow Catholic Patheosi, Mark Shea. One of the people who engaged in this talk was a Catholic priest who is prominent in the pro life movement. If that doesn’t make you gag, your gag reflex must be damaged.

We’ve all witnessed the President of the United States as he lies and lies, mocks sexual assault victims, degrades women, calls people nasty names, and openly encourages violent assaults. Evidently, his followers are not bothered by this.

We’ve acceded to a “news” media that dismisses anything that does not fit its party line by simply saying that it is a lie or a hoax. Instead of demanding better people for the positions of power that run our country, we pretend that we believe that they never did the dastardly things they did, and that even if they did them, it’s still ok.

We go into online conversations with our stingers out, venom dripping, and the lies we will repeat at the ready. We turn on people we once supported, start fights at family gatherings, and judge everything and everyone by whether or not they will accede to our inaccurate, brain-washed view of the world.

We have become willing accomplices in the destruction of our country.

There is a reason why I have never allowed hate talk on my blog. It wasn’t because I enjoyed monitoring comments or hearing all about how I was attacking someone’s “freedom of speech.”

I did it because I’ve spent a lot of years in public office and I’ve seen what happens to people when their leaders get them all worked up like America is today. I’ve seen the damage, and I’ve experienced myself how long it takes to calm people back down again.

I knew from the get-go that I would never allow my blog to be used to promote the kind of vulgar hate-talk that is so rampant in our on-line world today. I didn’t start this thing to do harm.

Things have become so heated that I’ve taken steps I did not want to take. First, I closed comments on Public Catholic. Second, I banned a couple of people who I otherwise like and admire from my Facebook page because they refused to stop the crazy-mean talk when I asked them.

I cannot stop the hate talk that is feeding the destruction of the social contract in this great nation. But I will not play host to it. I will not allow anything of mine to be hijacked for that evil purpose.

I want to suggest to you today that you do the same. You cannot stop other people from being crazy. But you get to decide whether or not you will join them.

It’s easy enough. Just do not allow it. Don’t allow it on your Facebook page, delete it from your tweets, and stop it in your conversations. Stay away from nut Facebook pages that promote false stories and lies. Stop going to web sites that brainwash instead of inform.

You know who and where these things are. You’re not stupid. You can tell the difference. So do it. 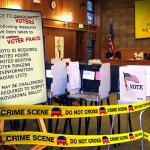 October 30, 2018 The News in 10. What is the Church's Message without Christ?
Browse Our Archives
Related posts from Public Catholic