Voter Suppression in 10. The Sure-Fire Way to Win an Election is …

The sure-fire way to win an election is to stop people who want to vote against you from voting.

Kick them off the voter rolls. Throw their ballots in the trash. Change the voting rules just before the election. You can change the vote totals by thousands of votes with these tactics.

The tactic of “voter suppression,” which is the fine art of making it as difficult as possible for the “wrong” people, which is to say people who might vote against you, is a finely-honed, on-going, deliberate Republican tactic for winning elections at any cost. It is accomplished by the means of making it difficult to vote. The usual tactics are throwing people off the voter rolls for spurious reasons, and throwing out ballots for equally spurious reasons.

I saw it happening in real time when I was in office. It is well-organized and has been on-going for at least a decade that I know of.  Part of this strategy has been to use the pro life movement to pack the courts with extreme right-wing judges who will support voter suppression with their rulings. This has worked really well.

The Roberts Court destroyed the Voting Rights Act. The Voting Rights Act was designed to end voter suppression. The packed Court has also upheld throwing voters off the voter roles in Ohio. The Supremes threw a large number of Native American voters living in the key state of North Dakota off the rolls just a few weeks before the election this November.

I believe that voter suppression originated in think tanks that were funded by “dark money” that came from a group of extreme rightist billionaires. (Read the book Dark Money by Jane Mayer. It should be required reading in political science and ethics classes. You can buy it anywhere, and it’s in your local library.) Judges also attend posh right-wing seminars and conventions where they are trained in how to rule according to corporatist goals.

This willingness to rule according to a corporatist, extreme right-wing agenda —  and not abortion or religious freedom — is why Kavanaugh’s confirmation was so important. It is the real purpose of the court-packing strategy pro life people have supported to the point of turning their backs on morality and the future of this country.

Voter suppression is a real thing. It is Jim Crow writ large and extended to everyone who might get in the way of the on-going corporatist robbery of our national treasury.

Here are a few headlines about voter suppression, as it’s happening right now, in front of all of us.

4. Native Americans Fight to Protect Their Right to Vote in North Dakota

5. Samantha Bee Republicans Getting ‘Creative’ with Their Voter Suppression Tactics.

8. Republicans are Rigging Elections to Win.

9. Voter Suppression in the Age of Trump.

October 27, 2018
The News in 10. Supremes Consider Hearing Case that Could Reverse Roe v Wade
Next Post 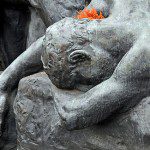