Will You Vote for Lies, Race Hatred and Fear?

Will You Vote for Lies, Race Hatred and Fear? November 2, 2018 Rebecca Hamilton

President Trump is running the Republican mid-term campaign, and he has turned it into a campaign of hate and fear.

In his desire to hold onto both houses of Congress for the Republicans, he has whistled every racist dog whistle known.

He’s run ads describing illegal immigrants as murderers, he’s announced that American troops will fire on un-armed civilians at our border and he’s even come out with the racist cant that he wants to “protect” American women from the immigrants.

This last is particularly rich, considering that the president himself is a serial sexual predator who has repeatedly backed child molesters and other sexual predators for positions of power in our nation’s government. A more serious question might be who is going to protect American women from him.

In his ad claiming that illegal immigrants are murderers, he said that “Democrats” are to blame for “letting” these murdering savages “in.” Like just about everything else he says, this is a lie.

America has perfectly adequate immigration laws and has had them at least since 2005 when I sat through days of hearings going over them. These laws are not and have not ever been properly enforced. The problem with illegal immigration is two-pronged, and neither prong is a Democratic creation.

First, major corporations, in particular the large corporate feed lots and corporate agriculture, bring illegal immigrants into this country in large numbers to employ them under conditions that violate many of their basic rights. Whole towns in several Western states are populated by the people from these plants.

Corporations often justify this by claiming that “Americans won’t take” these jobs. What they leave out is that Americans won’t take jobs that violate the safety and wage laws and that treat employs like indentured servants. Anyone who has dealt with the illegal immigrants who work at these plants will tell you that they work under conditions that are outside American law and live in constant fear of the police, as well as their employer.

There’s a line from the first Alien movie that says, “It happens that way my dear because that’s the way the company wants it to happen.”

It also keeps the corporate shills in political office where they can pass pro-rich “reforms” that drain the treasury into wealthy pockets. Some of this money is then used to finance Republican campaigns for office, keeping the corporate hegemony going.

The second reason that we are faced with this constant influx of illegal immigrants from below the Rio Grande is the abuse of the citizenry and the political unrest in the countries they are coming from. These people are like the rest of us. They’d stay home if home was tenable at all.

Exploitation of these countries south of the border by American corporate interests plays no small part in the poverty and unrest that takes place in the Southern Hemisphere of the New World. We have been very bad neighbors to these people, toppling democratically elected governments and replacing them with puppet regimes that do the bidding of our corporate interests, and repeatedly backing terror groups in the name of fighting “Communism,” which, in corporatist parlance means anyone who tries to help the poor.

If we seriously want to stem the tide of illegal immigration into this country, the way to do it is obvious. First, we need to punish companies that employ them. Second, we need to go to work, helping these countries develop functioning democracies that will lift up and empower their own people.

Sending armed troops to fire on un-armed civilians, labeling innocent and desperate men, women and children murderers and inciting hatred against them for political gain is not behavior worthy of anyone who calls themselves Christian. Yes, we have a serious problem with large numbers of people trying to come over the border into our country. But I have a news flash for you.

We’ve been hating them and reviling them and electing demagogues who incite hatred and violence against them for years and years now. It hasn’t done any good.

Another news flash is that It will never do any good. Because, my dear, the company doesn’t want it to do good.

President Trump is a liar and a demagogue. He is trying to capitalize on racial hatred and fear to turn votes so that he can retain control of both houses of Congress. What will happen if he succeeds in this is more of the same crazy that has torn this country apart this past two years. I don’t know where that will end, but the direction it’s taking doesn’t seem to be heading anywhere good.

He is campaigning entirely on lies, race hatred and fear. The question is, are the American people stupid enough to fall for it? Are you? 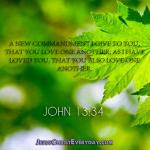 November 2, 2018
The News in 10. Trump-Loving Preachers Silent as He Bashes Migrants
Next Post

January 6, 2020 I Retired. Now I'm Back. Why?
Browse Our Archives
get the latest from
Public Catholic
Sign up for our newsletter
POPULAR AT PATHEOS Catholic
1