Don’t Let Opposing Trump Make You as Mean as He Is, Part Three

This child is destined … to be a sign that will be spoken against. Simeon

If we lose our freedom here, there is no place to escape to. This is the last stand on earth. Ronald Reagan.

Donald Trump is a monster. He is a traitor to America, a serial sexual predator, a corrupt, compulsive liar, and a nascent dictator with his thumb on America’s massive military and nuclear arsenal.

We have to fight him.

We have no choice but to speak against what he is doing.

There is no option for us but to do all that is in our power to prevent what is going to happen to the world if he wins another term.

The “other side” of the political divide from Trump, the Democratic Party, holds many ideas and positions that are against what many of us believe. It is a hideously painful thing for many Republicans to even contemplate voting for most of the Democratic candidates.

But the only moral option we have is to support whichever one of them wins the nomination. We must do it because they are the only viable way to save our Republic.

This is a war of politics, not guns and bullets. But it is a real war, just the same. If you would put on a uniform and lay down your life for America, know that backing any viable option we have to stop Trump is the same thing. War requires doing things you would never otherwise do. This is a war to save democracy.

America is, as Lincoln said, “a house divided,” on the question of Trump. Even though the only bullets being fired are words, this is still a civil war of a type. Like all civil wars, it pits friend against friend and divides families.

It has so completely corrupted our religious leaders that many of them are no longer religious leaders. They are political operatives for Trump who use the faith of their followers as a means to manipulate them on Trump’s behalf.

All this makes those of us who oppose Trump outliers on our own “team.” It leaves us alienated and painfully apart within our own churches.

Jesus Himself experienced this sort of thing. Simeon prophesied that Jesus would be opposed when Jesus was only eight days old.

“This child is destined … to be a sign that will be spoken against,” he said. He went on to tell Mary that a “sword” would pierce her own heart also, which certainly appears to be a prophesy of the day that the soldier rammed a sword through Jesus’ heart on Calvary.

Jesus was indeed “a sign that was spoken against.” Throughout His ministry, He was mocked, reviled and attacked by the most powerful priests of His day. They ultimately succeeded in getting a corrupt politician to murder the Son of God for them.

Being a sign of contradiction hurts. We are unwilling soldiers in a mostly bloodless war for the survival of our democracy. America has been taken by a traitor and a quisling for a hostile foreign power.

The separation of powers that keeps us free is being knocked down and destroyed by a monstrous man who is taking all the powers of government into his own hands. This is being done with the blessing and fully-aligned support of the Republican Party.

If America goes, can the Western world stand? Without America, the world will be dominated by Russia and China. That is the future that quisling Trump is taking us to.

Ronald Reagan said it well. He was speaking of America when he said, “If we lose our freedom here, there is no place to escape to. This is the last stand on earth.”

We have to do all we can to defeat Donald Trump.

Politics of any sort is a dance with the devil. That’s because politics is always about power, and power is one of the devil’s apples that he uses to tempt us. He even tried to tempt Jesus Himself with political power. “If you will fall down and worship me, I will give you all the kingdoms of the world,” he said.

Do you remember how Jesus answered the devil? He used Scripture. When satan tempted Him with political power, “all the kingdoms of the world,” He answered “It is written, Worship the Lord your God, and Him only.”

In other words, do not succumb to the idolatry of power. Worship God. Do not bend your knee before the false idol of political power. Do not follow the Political Heresy. Jesus repudiated political salvation more than once. This was one of those repudiations.

I believe that Jesus was fully human when Satan tested Him. He was one of us. If He had been fully God, He wouldn’t have been tempted. He wouldn’t have needed to quote Scripture. He could have just said, “Be gone.”

But we can’t do that, and Jesus, in His human weakness, couldn’t either. Not then, not during His first great trial against the powers of darkness. Just as Jesus the human did not step down from the cross, so Jesus the human was tempted by the same things that tempt us in the desert.

He didn’t use His divine powers to cast Satan away. He fought with the same tools that we have at our disposal. He used faith, Scripture and trust in God and Him only.

“Beware that, when fighting monsters, you do not become a monster yourself,” Nietzsche said. He understood the danger. But he turned his back on the protection of the Protector.

The loneliness of worshipping in churches that are besotted with Trump, is real. The pain of being slandered by malicious Trump followers hurts. The sorrow of losing trust in our religious leaders runs deep.

That is the Abyss, staring back at us. It is the devil, pricking us here and there to see what works. It is old scratch, poking us to find the method or means he can use to drive us to fall down and worship him, or if not him directly, one of his creatures, his petty little false idols that he dangles before us like charms on a bracelet.

I promised I would talk about the Way out of all this misery. We cannot be rogue planets without a sun. We must find our orbit. That orbit for all of us is Jesus Christ.

He not only suffered as we suffer. He showed us the Way. He gave us clear commandments and teachings to follow that will lead us through this or any other time of peril.

I’m going to talk about that in detail.

But this subject is too important to discuss superficially. Tomorrow is Part Four. 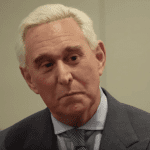 February 20, 2020 Stone Sentenced to 40 Months. Will Trump Pardon Him and How Long Will He Wait to Do It?
Browse Our Archives
Follow Us!

Catholic
I Looked Further into Hydroxychloroquine. Here is What...
Public Catholic

Catholic
My Kids are Absolutely Certain that I will...
Public Catholic
TRENDING AT PATHEOS Catholic

Bethany (for Monday of Holy Week), by Friar...
You came into our life on feet like dusty heartbeats, beating bare,...
view all Catholic blogs
Copyright 2008-2020, Patheos. All rights reserved.