I’m Impressed with Senator Romney. Senator Susan Collins, Not So Much.

I’ve read a number of comments thanking Senators Mitt Romney and Susan Collins for voting Friday to allow witnesses in Trump’s impeachment trial. I am impressed with Senator Romney. Senator Collins, not so much.

I’ve been in lawmaking bodies. I know how these deals go down. I think that Senator Lamar Alexander and Senator Susan Collins played footsie with the vote on whether or not to allow witnesses in the Senate’s “trial” of Donald Trump. I think it was all a set piece to help Senator Collins get re-elected.

First, Senator Collins did her usual coy little set-up. She does this “I don’t know how I’m going to vote” bit right up until the roll call on a lot of tough votes. It’s her way of playing both sides and keeping the worst of the heat off of herself.

Of course, nobody with even half a brain ever doubted for a minute that Senator Collins was playing games. After all, we’ve seen it before.

Senator Collins is a pro at dragging her constituents, the press and all the rest of the public down “shall I do it or shall I not????” lane. She puts us through her fake protestations of supposed indecision every single time. She pretends to weigh the upcoming vote in the balance scales of her equally pretend but exquisitely delicate little conscience.

Then, when the vote comes down, lo and behold, Senator Collins stands and votes with the Republican leadership. Remember the vote to confirm sexual predator Kavanaugh to the Supreme Court?

She went on for weeks with that deal. He met with her and evidently assured her that he would not vote to overturn Roe v Wade — this at the same time that pro life leaders were reviling anyone who questioned his pro life commitment as “pro aborts.”

After she had announced to all the world that the nominee had assured her that his pro life cred was a sham, she then hemmed and hawed about his much more convincing cred as a man who had attempted to rape one of his fellow students at the exclusive and oh-so-rich Catholic boarding school they both attended.

Of course, when it all came down, Senator Collins not only voted for the guy, she stood up and made a gorge-swallowing speech about sexual assault.

For everyone who thought she was sincere back then, I place before you her repeat performance, albeit with a different vote this time, in the question as to whether or not a president is above the law that took place on Friday.

As serious as the issue of putting an attempted rapist on the Supreme Court is, it pales before the issue of allowing a sitting president to betray this country. This time, little Senator Collins got to trot out her act in reference to a vote that would determine whether or not we will remain a free country. She was deciding whether or not to empower a monster, to say that a president using our monies to coerce  a foreign government to interfere in our electoral process on his behalf is so ok that the Senate will aid and abet him in his cover-up of the same.

This isn’t a small deal. It’s every bit as big as the decision when the Reichstag and Reichsrat passed the Enabling Act in 1933, giving Hitler full control of German government.

This is the same sort of deal as that. What the Senate is doing is saying that the president is above the law, that he can do whatever he wants.

So, what did Senator Collins do? She did what she always does. She put on a good show about how torn she was. But, since this is an election year and her bid to hold office is under challenge, she needed to vote to allow witnesses.

Normally, she would just do her usual last minute thingy and decide that the better part is to vote as she’s instructed by leadership. But not this time. The election is just a few months away. The people of Maine might remember her vote and kick her out of office.

Still, the leadership needed the votes to kill witnesses so that they could become part of Trump’s cover-up of his betrayal of America.

Here’s what legislative leaderships do in situations like this, when one of their loyal soldiers needs to take a walk instead of hitting the ball. They give him or her “cover.” That’s actually what it’s called, as in “Lamar, you’ve gotta be ‘no,’ so we can give Susan cover to be ‘yes’.”

So, Lamar Alexander, that crusty old Senator who is retiring and doesn’t face a re-election bid, took the hit for the little lady from Maine. Retiring Alexander would vote to not allow witnesses in this so-called “trial,” and that way his colleague could stand up and take her show-boat vote to allow them. Her hope is that the folks back home will be suitably impressed and vote to re-elect.

But I’m here to tell you, that’s how it happens. If somebody can’t “take a vote,” and they’re a loyal soldier of the leadership, then the leadership works a deal where their person can vote however they need to and the legislation goes the way the leadership wants anyway.

That’s why you see these surprising votes on hot-button issues. It’s why elected officials are able to suffer a sudden attack of statesmanship during election years and still nothing changes.

They’re performing, each one doing his or her part; like a political ballet.

Senator Susan Collins has been a very good soldier for the Republicans. She’s managed to bamboozle her constituents and do the deals her constituents don’t want done right out there in public. She’s got everybody on every side thinking that she’s really, deep down in her heart, with them. She is one fine politician. I mean that sincerely.

She may not be particularly honest with the people she represents. She certainly is playing all of us for fools. But she is very skilled and effective at doing whatever she wants and making it look like she cares when she really doesn’t.

I don’t live in Maine. I don’t have a vote in whether or not Senator Collins is returned to the United States Senate so she can playact her way through the next six years. I’m not telling the people of Maine what they should do.

But I do suggest that they take a look at all this and be aware that they are being played.

As for that other deal, the one about the Supreme Court, we have five supposedly pro life votes on the Court. We were told each time one of these birds came up for confirmation that we had to back them, no matter what, that we couldn’t demand another nominee who wasn’t a sexual predator or we were directly killing little babies with our own hands ourselves.

All I can say is they’d better vote to overturn Roe. If they do anything else, we were lied to in the worst way.

But that, as they say, is another story. We’ll know soon enough.

In the meantime, don’t be fooled by these shenanigans office holders pull. Remember the Enabling Act of 1933. There’s too much at stake for playacting. 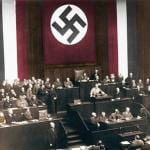 February 3, 2020
Trump is Now a Dictator, Courtesy of the Republican-Controlled Senate
Next Post

February 4, 2020 There's an Easy Fix for Snarled Elections. Let's Go Back to Paper Ballots.
Browse Our Archives
Follow Us!