Trump is Now a Dictator, Courtesy of the Republican-Controlled Senate

Trump is Now a Dictator, Courtesy of the Republican-Controlled Senate February 3, 2020 Rebecca Hamilton

In 1933, the lawmaking body of the German government passed the Law to Remedy the Distress of the People and the Reich. We call it the Enabling Act.

The Enabling Act was an amendment to the German Constitution that allowed the Cabinet to issue laws independently of the Reichstag (which was the rough equivalent of Congress) and the president. Since the Cabinet was Hitler’s people, the Enabling Act effectively made Hitler into the lawmaking power of the German government. It made him an elected (and he was elected) dictator.

Since World War II, American presidents have, with the full consent of Congress, been steadily acquiring the same powers for themselves that Hitler seized through the Enabling Act. Presidents now start and wage wars without conferring with anyone. They routinely author legislation on their own and and put it into law with the simple conceit of an executive order-signing ceremony.

President Trump began pushing the envelope on the already dictatorial powers that Congress had ceded to the presidency the moment he took office. He superseded Congress’ budget-making powers when he declared a false “emergency” in order to raid money that had been (by law, I remind you) budgeted to defense and using it to build his flimsy and useless wall. This was a clear step down dictator road.

But the real all-time show stopper was when he flat-out refused to reply to Congressional subpoenas with no explanation and no legal action to buttress it. This was clearly a dictatorial act. He was declaring himself above the laws of the land.

He did this to cover up the fact that he attempted to force the government of the Ukraine to interfere on his behalf in our upcoming election. His defense team, when faced with the overwhelming mountain of evidence, admitted that he committed the crimes for which he was impeached. He did the crimes he was charged with. He used threats of unilaterally withholding American aid, which had been allocated by Congress, to attempt to coerce a foreign government to interfere in the 2020 election on his behalf.

Last Friday, they closed down the “trial” they were supposed to hold concerning President Trump’s removal from office. They voted to make this “trial” into a sham by not allowing those who could present damning evidence against the president to testify.

President Trump is a traitor, and so are the Republican members of the United States Senate, with the single exception of Mitt Romney. I am aware that Senator Susan Collins voted to allow witness testimony. I’m going to write a whole post on what I think happened there, and why I’m not congratulating her for her valor.

As far as I’m concerned, the only patriot in the entire Republican side of the United States Senate is Senator Mitt Romney.

In many ways, Friday’s vote was America’s Enabling Act. The Republicans in the Senate have made the United States Senate into something akin to the Roman Senate after Caesar. The Republican members of the Senate are traitors to this country. They have betrayed our democracy.

They have made Donald Trump into a dictator who is entirely above the law. As of now, President Trump has not only broken the law and betrayed this country, he has demonstrated that his control of the Republican Party is so absolute that they will allow him to do it without consequence.

The Republican Party has flag-waved for votes for decades. They’ve routinely attacked the patriotism of Democrats and styled themselves the only “real” patriots. But last Friday, when it came right down to it, they betrayed America.

There are no checks and balances on the unhinged nut job sitting in the Oval Office right now. Our Constitution has been shredded by the callous disregard for even a semblance of patriotism by the Republican members of the United States Senate.

President Trump was elected by the Russians’ direct interference in the 2016 election. He has done Putin’s bidding in weakening and working to destroy NATO and destroying and attacking our alliances and allies around the globe. He recently opened the gates to genocide on our allies the Kurds. He is systematically weakening the West and destroying American influence around the globe. I believe that Putin worked to get him elected so that he would do these things.

I believe that President Trump is a straight-up traitor to this country. I also believe that Friday’s vote gave him a green light to do whatever he wants with no consequences. He is now above the law. 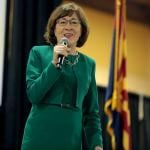 February 3, 2020 I'm Impressed with Senator Romney. Senator Susan Collins, Not So Much.
Browse Our Archives
get the latest from
Public Catholic
Sign up for our newsletter
POPULAR AT PATHEOS Catholic
1

Catholic
I Believe What the Church Teaches. That's Why...
Public Catholic
TRENDING AT PATHEOS Catholic