Jesus was a Refugee, an Illegal Immigrant, Fleeing for His Life. Pray the Seven Sorrows of Mary

Jesus was a Refugee, an Illegal Immigrant, Fleeing for His Life. Pray the Seven Sorrows of Mary August 4, 2020 Rebecca Hamilton

An angel of the Lord appeared to Joesph in a dream, saying, “Arise, take the young Child and His mother, flee to Egypt and stay there until I bring you word; for Herod will seek the young Child to destroy Him.

Jesus was betrayed to Herod by the wisemen whom God had called to come pay homage to Him.

These wise men must have been spectacularly unwise, naive and trusting to so completely overlook the ruthlessness of power. On their journey to see Jesus, they stopped at the palace of the sitting king of the vassal state where Jesus was born and inquired of this king where they might find the newborn “king of the Jews.”

Any ruler who stays in power grows antennae that are constantly scanning the horizon, listening to the rustlings, searching for potential challenges to his or her rule. Power is a battle, always. Someone is scheming to take it from those who hold it, always.

This King Herod that the not-so-wise-men approached had better reason to be on his guard than most kings.  He sat on a throne that was balanced precariously on the tip of the Roman sword.

He ruled only on the sufferance and due to the military force of the Roman Empire. His mandate came from Rome, and what Rome wanted in exchange was no trouble on the trade route that went through Israel.

That was Herod’s job, and it wasn’t as easy as it might sound. First, he was what we would call today a Quisling, a traitor ruler who sold out his own people by collaborating with a conquering enemy. That made him unpopular with the people and weakened his ability to maintain the peace that the Romans demanded.

The Jews were a tempestuous people, survivors of many conquerors, exiles and attempts to destroy them. Their faith, which had begun as a centuries-long on-off slip-sliding back into paganism, had hardened in the crucible of exile and rebuilding that they had lived through into a powerful cohesion in essential matters of faith and fidelity to their identity as the Chosen people.

The idolatry, polygamy and child sacrifice of surrounding cultures were scrubbed from their society. Jews didn’t expose their baby girls to die, marry multiple wives, or switch from god to god.

They were different from the rest of the ancient world with their insistence on a weekly day of rest, restrictive diet and refusal to pay homage to the Roman pantheon. They weren’t easy to govern. Keeping the peace was not a simple thing for their quisling king.

Scripture tells us that the not-so-wise men blithely stepped into this web of intrigue and then stepped back out again without a scratch to themselves.

“Where is the newborn king of the Jews,” they asked the insecure and murderous monster who sat on the throne of Israel.

Herod was as duplicitous as the wise men were innocent. He didn’t know where this newborn king might be, but, “When you find him, come back and tell me where he is,” he said, “so that I may come and worship him also.”

Evidently the Wise Men believed this and went on their way. It took God, warning them in a dream, to keep them from going back and telling Herod where Jesus was.

Meanwhile, Mary was raising her baby. I imagine that Jesus was growing too fast, the way babies do, changing almost hourly as He learned to roll over, then began to sit up. We don’t know if He had begun to crawl or cruise along the edge of things in a first move toward walking, or if He was still a babe in arms.

All the Scriptures tell us is that when Herod realized the Wise Men weren’t coming back, he sent soldiers into the area where Mary and Joseph lived with instructions to kill every baby boy under the age of two.

The things men will do when they put on the uniform of a government and are given an order can confound an ordinary conscience. This wasn’t the first time and it certainly wouldn’t be the last when a corrupt ruler sent soldiers to kill innocents. Rachel weeps today, just as she did then.

God sent a dream to Joseph, telling him to get up and take Mary and the baby Jesus into Egypt. It sounds as if it was a run-for-your-lives dream, an imperative without any lead time.

I’ve always thought there is a message in the fact that God woke Joseph with this warning instead of Mary. Joseph was the man, the protector of the family, and God used him to do what He had created men to do from the first.

Joseph got his little family up, and they ran.

Mary had a young child, a baby, to care for, and she and Joseph had a lot of miles to cross to get to Egypt. They were running ahead of murderous troops bent on searching them out and killing their helpless baby. They couldn’t tell anyone where they were going because the soldiers probably would ask, and soldiers without the restraints of decency and law are not easy to deny.

They had to run. They could only take what they could carry, or, if they had a donkey, what they could load onto its back. Their provisions must have been, of necessity, things needed for survival; food, water, whatever tools they had to have.

It was a long walk in the wilderness, sleeping on hard ground in desert country where the nights get cold.  There were no cell phones or Skype for calling home. The cutoff from their families would be absolute.

Mary lived the grief, fear and desolation of the refugee. Jesus was, probably before He could walk, an illegal immigrant, crossing borders, a stranger in a strange land.

Our Lady fled from one country to the next with her child because she was running for His life. In a few shorts months, she had gone from unwed mother who could have been stoned for sins against the sexual double standard, to weary traveler forced to give birth in a stable, to a young woman who was told that her newborn would die a horrible death and that a sword would pierce her heart also. She had gone through all that and arrived at this desperate flight across a wilderness to an uncertain future in a strange land. She literally had noting except the baby in her arms and the man walking beside her, leading the way.

It was cold. It was terrifying. It was hard.  Her arms and back must have ached, her feet must have blistered, and she must have become dirty, sun-burned and tired, carrying her baby across the wilderness.

It was terrifying, hiding from the King’s soldiers. She was losing her country, her family, her friends, everything she had ever known.

She had to subject her precious baby boy to the insects, heat, cold, hunger and danger of the journey. And always, back there behind them, were the soldiers, with their swords.

Mary and Joseph may have found other Jewish refugees in Egypt, communities where they could settle and try to build a life. I would imagine the lessening of want and fear gave Mary time for the survivor guilt to come in on her like fog, flowing through a mountain pass.

God had wakened Joseph in the middle of the night with instructions to take Mary and Jesus and run for safety. Mary’s baby was alive and well in His new home.

But other mothers had lost their babies, murdered in an attempt to kill Jesus. Of all the things that Mary suffered in her life, this must have been one of the most difficult. I would guess that she lived with a steady diet of “if only” for a long time.

If only we’d moved somewhere else.

If only the Wisemen hadn’t gone to Herod in the first place.

If only we would have had time to warn everyone, so they all could have hidden their babies.

And then, I’m sure there were the whys.

Why did the Wisemen go to Herod?

Why didn’t God warn everyone?

Why are we poor and helpless?

Why did the soldiers obey such horrible orders?

Why does God allow someone like Herod to sit on the throne of Israel?

She must have looked at Jesus a thousand times a day and thought, “My precious, precious baby, they wanted to kill you.”

Mary may have been conceived without sin. But she wasn’t born without a mind. Jesus grieved and suffered like we do, and He was God and human both. Mary was all human and nothing else.

No amount of assent, no depth of faith, can spare any of us from the whys and if onlys of grief. The guilt of surviving when others die is a knife that never dulls.

The price of Jesus’ life, the portent of it, seemed to get bigger with every turn of the prophetic dial. Every bit of it hurt Mary.

She was learning, long before she stood at the foot of the cross, what it meant to be the mother of suffering humanity.

If you want to learn how to pray the Rosary of the Seven Sorrows of Mary, go here. 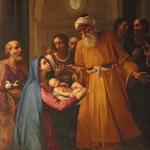 July 31, 2020
A Sword Will Pierce Your Heart Also. Pray the Seven Sorrows.
Next Post

August 5, 2020 Losing Jesus. The Third Sorrow of the Seven Sorrows of Mary.
Browse Our Archives
get the latest from
Public Catholic
Sign up for our newsletter
POPULAR AT PATHEOS Catholic
1

Catholic
If You're Terrified Trump Will Win this Election,...
Public Catholic 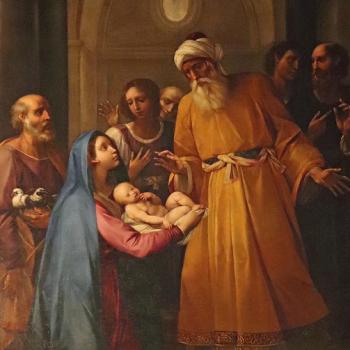 The Canaanite Woman And Jesus
Often, reading the Gospels can surprise us. Jesus acts in ways which...
view all Catholic blogs
Copyright 2008-2020, Patheos. All rights reserved.