Hey Okies! That’s Not Haze in the Sky. It’s Smoke. The West Coast is Burning Down.

Hey Okies! That’s Not Haze in the Sky. It’s Smoke. The West Coast is Burning Down. September 15, 2020 Rebecca Hamilton

Hey Okies! That’s not haze in the sky. It’s smoke. The West coast is burning down and — Surprise! — your boy Trump isn’t doing a thing.

We’re talking about the whole West coast from Mexico to Canada; all our beautiful cities, towns and majestic forests are ablaze. The fires are spreading inland for what looks on the map like close to a thousand miles.

Meanwhile, Trumpy Bear went three weeks saying nothing at all. Then, yesterday, he blessed our suffering West coast with a brief taste of his presence.

What did he offer them? In a pretty fair imitation of Marie Antoinette’s famous “let them eat cake,” he told the people of the West Coast that “cool weather is coming.”

Does that sound familiar?

Does it sound like an echo of the “hot weather is coming” story he told us last spring about COVID-19?

Here’s the thing, my fellow Okies.

If he’s not a psychopath, he’ll do until the psychopath gets here.

Here’s the another thing, the other shoe that’s waiting to drop.

Because he really, truly, all the way through to whatever putrid pocket of pustulant slime constitutes his core, doesn’t care.

He has no pity, empathy, guilt or shame. He looks at you the same way a shark looks at a seal, a rattlesnake looks at a mouse. Your humanity does not register with him. He sees prey.

I believe thatTrump is a psychopath. To him, this country and all its people — every single one of us — is prey.

‘I am your wife,’ badly burned woman whispers to man who found her in Oregon wildfire

Note: the line: If he’s not a psychopath, he’ll do until the psychopath gets here is a riff on a line from the movie No Country for Old Men. 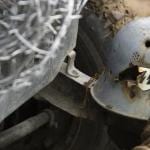 September 18, 2020 Pray for Father Frank.
Browse Our Archives
get the latest from
Public Catholic
Sign up for our newsletter
POPULAR AT PATHEOS Catholic
1

What are people starving for, Fr....
Catholic Bard
Related posts from Public Catholic