Future generations are either going to look back on this time in American history and say, “Thanks be to God, they stopped him,” or will they look at us and say, “You had a chance to stop this monster, and you didn’t. What was wrong with you?”

If Trump is re-elected and allowed to play out his full evil, the day will come when your grandchildren will lie and claim that they are not related to you to hide the shame of what you are doing now. Your grandchildren and great-grandchildren may very well stand up in front of the descendants of the people whose ancestors Trump destroyed and apologize and cry with their shame that they are your progeny the way that the grandchildren of Nazis do today.

If we don’t stop Trump in November, we are all going to reap the whirlwind. America is much too important and powerful for the destruction to stop here, in this country. The harm he will do will circle the globe and come back home to roost on us.

Look at America today. Consider what he has done to us in four short years. Just look.

If he wins in November, the next four years will be Trump without guardrails, Trump totally unleashed and unchained.

If you support Trump, you are supporting a monster.

One of the most sinister of his many monstrous actions has been the way he has turned Homeland Security into his personal SS. He couldn’t get Chad Wolf, the henchman he wanted to head up the Department of Homeland Security, confirmed. Not even his puppets in the Republican-dominated United States Senate could pull that off. So, with his usual Trumpian contempt for the law, he appointed Wolf the “acting” Secretary of Homeland Security and went ahead without Senate confirmation.

Homeland Security under Wolf’s leadership has become Trump’s  SS. It is Trump’s personal army that he has used without compunction against American citizens. It also runs what is increasingly being exposed as a type of concentration camp for “undocumented” immigrants.

Trump is turning America into a Putin type Oligarchy with the money and power centered on him and his three oldest children. Simultaneously, he is developing the means to create a police state by turning the Department of Homeland Security and ICE into something that closely mirrors Hitler’s SS.

In true SS fashion, the Department of Homeland Security has provided troops to attack civilian protesters under the guise of “law and order”and is the institution that is used to commit human rights abuses.

In the beginning, DHS human rights abuses were limited to a group of people that a lot of Americans had clearly decided deserved whatever anybody did to them.

The same people who claim that they care deeply about the sanctity of human life don’t give a rat’s whisker for undocumented immigrants. They’re very fond of saying “They broke the law” as if that negates the fact that they are talking about human beings. These people hate Hispanics. They don’t care what happens to them.

Trump was elected on the basis of race hatred and misogyny. He got his start in politics by pushing the racist birther movement. When he wore that out, he switched to hispanics. This year, he’s focused on hating black people. His misogyny never stops. No matter who else he’s abusing, he’s abusing women.

While Trump’s Christian supporters wave abortion around as the catch-all excuse for every evil that they or their combover hero commits, their pro life credo doesn’t stand up to scrutiny. They lap up any racist trope that comes down the road and they support every abuse that Trump heaps on hispanics, blacks and women. That’s not pro life. That’s hypocrisy.

They get vicious and bullying in their defense of rapists, child molesters and their own dear sexual predator president. They never, no matter what, call foul on anything that Trump or his whore clergy say about black people, hispanics and women. Lately, Trump has added “protesters” to his list of people to hate. Because, you know, Americans have never protested anything before. No president ever faced protestors before Trump. It’s un-American to protest and talk back to your government.

The only reason the Republicans haven’t run their regular election-year “crisis on the border” scenario is that they’ve been too consumed hating on Black Lives Matter and condemning black people, liberals and protestors. I guess that even they, with all their many years of practice at running race-baiting political campaigns, couldn’t organize a five-track hate railroad. So, as far as the flaming rhetoric goes, hispanics get an election cycle on the bench and black people, women, liberals and protesters are in the barrel.

Of course, none of this has stopped the human right abuses that have become the speciality of Trump’s DHS.

The story has come out of the ICE detention centers that large numbers Hispanic women are being subjected to unnecessary and unwanted hysterectomies. My Patheos colleagues Mary Pezzulo, and Michael Stone have both written about this.

This is piled on top the Trumpian practice of stealing Hispanic children and adopting them out.

Trump is deporting undocumented residents from the United States. Their children who were born here are American citizens. So, instead of deporting these people’s kids, he is taking them away from their parents and putting them up for adoption.

So, the Trump DHS has surgeons doing unnecessary hysterectomies on unwilling and unwitting hispanic women in his Neo Nazi concentration camps. They’re stealing hispanic kids and putting them up for adoption. And, of course, they are continuing the time-honored Trumpian atrocity of taking children from their parents at the border and putting them in cages.

These are full-on police state human rights abuses. They are obviously the harbingers of much worse things to come.

They are part of an overall process of overturning our democracy and shaping it into an oligarchy which is raided and controlled by one man for his personal benefit. This push toward an oligarchy is being aided and enforced by the beginnings of a police state, complete with terror tactics against the populace.

There is only one way to stop this horror show.

Those of us who have the honesty and courage to look at reality face to face and take it on its own terms have got to do everything we can to stop Trump. This election is a pivot point in human history.

If Trump wins, he will destroy American democracy. I do not know where the destruction will stop, but I do know that it will reach far beyond these shores and this nation.

We have, because of the great strength of our democracy, come through four years of monstrous mismanagement and corruption and we still have one last chance to turn it back.

If we lose America, no issue, including abortion, matters.

Separated from parents, some migrant children are adopted by Americans

AP: Migrant children may be adopted after parents are deported 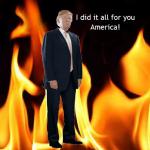 September 12, 2020
Trump: The President Who Fiddled -- or Golfed -- While America Burned.
Next Post

September 15, 2020 Hey Okies! That’s Not Haze in the Sky. It’s Smoke. The West Coast is Burning Down.
Browse Our Archives
get the latest updates from
Public Catholic
and the Patheos
Catholic
Channel
POPULAR AT PATHEOS Catholic
1

What Not to Say to a...
Steel Magnificat
Related posts from Public Catholic