Did the Bishops Think We Would Support Excommunicating the President?

I’m guessing that the Catholic bishops were surprised by the public reaction to their plan to excommunicate the President of the United States. I say that because they’ve been making a lot of huffy statements that they never meant any such thing.

The new truth, according to some of the bishops, is that all they were doing was putting together a document on the Eucharist that would reaffirm its significance and meaning in Church life. They never, nohow, no way, ever, were aiming at Joe Biden. Further, they’ve been misunderstood, lied about, and are victims of misreporting.

I find this interesting, but not confusing.

One time, years ago, a couple of my family members overheard a particularly troublesome relative on the phone, trashing their daughter with what amounted to a bunch of lies. They confronted the family member. This person promptly and brazenly denied they had ever said any of the things the others had heard. When confronted with the fact that they heard this person say it, the individual angrily replied “Who are you going to believe, me or your ears?”

But now, the bishops are saying that all they ever wanted to do was write a beautiful document that would bring the faithful back to a full understanding of the Eucharist.

My reaction to this is simple.

We’ll see what they do. And then, once they’ve done whatever it is, we can react to that.

In the meantime, this whole thing has been somewhat instructive concerning the evident myopia of the Catholic bishops here in America. I’ve never seen such a poor reading of the body politic in my life.

When the bishops can manage to get someone like me — someone who is totally pro life, who has defended them in public to her own great cost, who does not believe that people who support abortion should take communion — to go against their move in this matter, they’ve stepped into some kind of hole. I’ve been so desperate to follow the bishops that I’ve followed them a couple of times when I shouldn’t have.

But I do have a couple of places where I can not go; things I will not do; actions and positions that I will not only not support, I will fight with all I’ve got.

One of those places is rape, sexual assault and violence against women. Another is when my religious leaders take it into their little clerical heads that they’re going to pile on in a time of peril to this country and do things that endanger the survival of our Republic. The United States of America matters to me. I don’t quite fathom how aiding and abetting the people who are trying to destroy this country is a pro life thing to do. It looks like one of the most pro death enterprises anyone can engage in.

Our Republic is in peril from an insane Republican Party that is owned by a group of billionaires without conscience and that has sunk into anarchy. Less than six months ago, we had a sitting president of the United States try to set up a coup to overturn the election he lost and install himself as a dictator.

The former National Security Adviser and a retired general in the United States Army called for the overturn of America’s government with a “coup like the one in Myanmar” just a few weeks ago. Just like the Catholic bishops, he now says he was misunderstood.

Several retired generals authored a letter backing the Big Lie that has fueled all this. Major news networks put out lies designed to foment race war and hatred, and which back the same lies that led to the coup attempt on January 6 every day, all day. They pump vitriol and a set up for violence and social breakdown into their follower’s minds hour by hour, minute by minute. A news commentator on a national news network called for “mass executions” on air just last week — and there were no negative consequences to him for doing this.

I’ve said this repeatedly. Joe Biden has been pro choice for almost 40 years. If the bishops wanted to excommunicate him, they could have done it at any time. Making that move now doesn’t look religious. It looks like ugly politics that is designed to aid and abet the extreme right wing Republican Party that is working to destroy this nation.

Donald Trump, the miserable excuse for a man who tried to stage a coup and install himself as dictator, has been the bishop’s darling. In fact, he’s been the darling of all conservative Christianity. I personally lost count a couple of years ago of the people — including priests — who were telling me I would go to hell for speaking against this woman-hating, woman-bashing, racist, corrupt, lying, traitorous serial sexual predator. I’ve had people tell me lots of times that I’m not a Catholic because I oppose Trump.

The bishops have aligned themselves with this monster, and also with this new, nut job Republican Party that is attacking our Republic. I don’t know what it is with the Catholic Church and fascism, but just look back over the last hundred years at the number of times it has laid down and let some monstrous fascist politician walk all over it.

Now — now — at this fraught time in our nation’s history, the bishops decided to write this document.

What surprised me about the situation is that it appears, looking at it from the outside, that they actually thought people would support them in excommunicating the President of the United States. They seemed … what’s the word? …. oblivious? … to the reality of the situation they were entering.

When he won, there were spontaneous mass celebrations in the street. The bells rang in Europe. Grown men cried and lots of people got the first good night’s sleep they’d had in four years.

The monster was dead. We stopped him. America did something that no other country had ever done. We removed our Hitler without firing a shot, with the ballot.

Then, the monster started removing people in the defense department and replacing them with his stooges. He refused to admit that he’d gotten beat. He challenged the election right up to this very moment. His stooges in the Republican Party in Congress tried to overturn the election by refusing to certify the electoral college vote, and his brain-dead followers stormed the capitol in a coup attempt aimed at overturning our government and installing him as a dictator. He had rigged the deck so that it took hours for support to the capitol police to arrive.

His stooges in the Republican Party have since blocked every attempt at an investigation or consequences for this attempt to overthrow our government. The Republican Party has moved to hard-core race baiting and attempts to strangle our government. They have engaged in a wholesale movement back to Jim Crow laws to keep people from voting and have blocked voting rights legislation in Congress.

About a year ago, the bishops issued a pretty statement that they clearly never meant saying that racism is a life issue. Then, they backed the racists.  Just like they backed the sexual predators and rapists.

Now, when their plan to excommunicate the president has run into more than a little resistance from the 81 million who took to the streets in jubilation when Joe Biden won the election, they are telling us they never meant it, they’ve been misrepresented, lied about and slandered.

I think they misread the public and their own parishioners. The truth is, the bishops’ only supporters on this deal are going to be extreme right wingers. You know who I’m talking about; the folks who call Pope Francis “Bergoglio” and who don’t care what Trump or the Republican Party do; they’re the golden calf and these folks are sticking with their idol.

That’s everybody they’re going to get to support a move to help those who are trying to upend our democracy. The bishops’ mistake was thinking that the rest of us, just because we’re usually quiet and supportive, would blindly fall in line.

June 22, 2021
Father James Altman's Rant Against the Archbishop of Detroit: Watch It and Weep.
Next Post 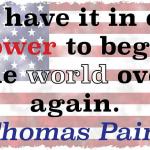 July 3, 2021 This July 4 Our Democracy is Under Attack. Standing Against the GQP.
Browse Our Archives
Related posts from Public Catholic