It Isn’t 1990 Anymore: Palm Sunday in a Dangerous World.

Holy Week opened today as it is does each year, with palms. Churches distribute palms, and worshippers process into the church. Mothers everywhere whisper “Stop that!” to the horseplay that results.

We were Episcopalians back in the early 1990s, but the mass was the same. My little boys had to be reminded that the palms were not swords. It was always a challenge to keep them walking in line into the church and then to deal with the squirming, poking, and motor sounds as they “drove” the palms along the pews like pretend trucks.

It wasn’t a situation that allowed for collected thought. Neither was the time after, when we went home and I put lunch on the table while the kids played and their daddy watched sports on tv. It was a straight shot of busy, busy right through the day until I got them bathed, into bed, prayers said and finally said “nite, nite.”

By that time, I wasn’t too deep into thinking at all. These moments after the kids and hubs were down were the only time I had to myself all day. Palm Sunday, with it’s liturgy of blood, suffering and death, didn’t penetrate too deeply into the busyness of life.

Now, I have more leisure to think and feel my way through the ritual. I can listen to the words and let them sink into me. It seems as I listen that the world is growing more dangerous, more like the one of that first Palm Sunday.

I raised my family after the Soviet Union collapsed and the Cold War ended. The worst I had to fear was two little boys sword-fighting with the palms during church, and me, forgetting to turn on the oven before we left so there was no roast to eat when we got home.

The idea that our country might be destroyed from within because a large percentage of the population had been deliberately driven crazy by billionaire-financed media and politicians who were working to destroy our democracy was laughable. American democracy was solid and a given, never to be doubted.

Who could have predicted the repeated black swans of this 21st century — electing two minority presidents, one an incompetent, the other a Putin-puppet psychopath, the economic meltdown of 2008, a worldwide pandemic, Russia bent on resurrecting the old Soviet Empire through bloody wars of conquest, and a coup attempt by a sitting president and his followers?

Our American world is buffeted by the storms of paid-for political hype and craziness, pandemics and bloody wars in far away places. Right wing media, Pharisaical clergy and neo-Nazi politicians that are both controlled and financed by extreme right wing billionaires are deliberately driving people crazy for their own gain. They have brainwashed around half the population into a constantly enraged mob that does not think.

All this forms a surprising parallel to the political paradigm of the first Palm Sunday. It echoes the mob-driven time of cheap life and angry desperation of the first century.

Palm Sunday then and now is all about the mob. Zealots and crazies bent on violence hyped people then just as right wing media and demagogues hype people today. The Pharisees of both times seek their own advantage at the cost of the people they claim to lead.

The story of Palm Sunday 2022 and the political backstory of the first Palm Sunday are both about selfish, amoral men driving the mob that swings from one extreme to another. The Passion tells the tale of the mob that can shout Hosanna! On Sunday, and then shout Crucify Him! four days later.

Mobs are worked up and pushed by demagogues to achieve outrageous consequences that often end up getting the mob itself killed.

Palm Sunday appears on the one hand to be a high point of Jesus’ earthly ministry. He entered Jerusalem, the Holy City, riding on a donkey that had never been ridden before. This was prophecy fulfilled. It was one more proof that He was the Messiah.

Crowds cheered Him and laid palm branches in His path. It looked like a parade, felt like victory.

But it was the beginning of His Passion, of what He had called “My time.”

How did He feel, looking at that crowd of people who were shouting Hosanna! and laying down palm branches?

He knew that four days in the future they were going to shout “Crucify Him!”

He knew, as human beings are wont to forget, that even in the best and most stable of times, all glory is fleeting, and that this Palm Sunday glory was not the high point it seemed, but the beginning of the end. Scripture tells us in another place that Jesus did not trust Himself to a group of people because “He knew man.”

He knew us. What we are. How we can turn. Our penchant for betrayal. Our deep unreckoning stupidity.

Only individuals, acting as individuals, were able to overcome the temptation to join the crowd when it yelled “Crucify Him!” Individuals stood at the foot of the Cross in support and love of Jesus while the crowd mocked Him.

The thief on the Cross turned to Jesus in remorse as an individual. The other thief followed the crowd and mocked him.

The crowd failed Him. The crowd chose Barrabas over the Son of God.

There is a message in Palm Sunday that is specific to the time in which we live. It is implicit in the first Palm Sunday and writ large in the events a few days later.

Following Christ instead of the crowd is an individual act.

If you follow Jesus, you do it as your own, lone, self.

The singular, unique, fragile, scared and quavering individual that you are; you follow Christ.

You can allow yourself to be swallowed up by the crowd and join the stampede. You can commit horrific acts of cruelty and stupidity with no sense of shame because you do it as part of a crowd. You can live your entire life as a nothing except one of the crowd.

But if you follow Jesus, you will do it as yourself alone.

This Holy Week is like the first one in that insane zealots have allowed their minds to be swallowed whole by their delusions, and large numbers of the populace support them. Now as then politicized clergy sell out their faith to gain position for themselves. Now as then the world feels solid as it teeters on the brink of something.

Don’t weep for me, Jesus told the women of Jerusalem. Weap for yourselves and for your children.

He knew that the violence which underlay their society, the violence which manifested in His own phony “trial,” torture and murder, would set them on a path so disastrous that it would scatter their nation to the winds in a 2,000-year diaspora. I would guess that then as now the niggling sense of danger, the smell of it off in the distance, unsettled the people. But they stifled the warning that they felt in their bones just as they ignored the direct prophecy Jesus gave them the day He was crucified. They hid from the truth they knew but wouldn’t asknowledge in the false safety of following the crowd.

He told them what was coming, and they didn’t hear. They saw it in the blood running down His back, in the nails driven into His wrists, and they wouldn’t see.

Then as now, if you want to save yourself, you must step aside from the crowd. You must walk your own path, think your own thoughts and act according to what you know.

The thief on the cross saved himself by turning, as an individual, as one person making his own choice, and saying, “Jesus remember me when you come into Your Kingdom.”

If you want to save yourself, you must do the same. 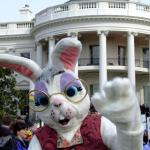 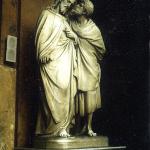 April 18, 2022 Can you sit at table with your Judas?
Browse Our Archives
Related posts from Public Catholic