The Blessings of Foreign Gods

I am Pagan.  I am Quaker.  Once I was Christian, but that was a long, long time ago.

These days I no longer have a Pagan group to practice with.  I attend Quaker meeting regularly, but Quaker worship, while it feeds me in vital ways, still lacks some of the spiritual juiciness that I need if I am to feel fed and nourished by my spiritual practice.

So I—already a “both/and” with two spiritual identities—have been dropping in at a once-a-month Wednesday evening Taizé worship at the local Episcopal Church.  It’s been interesting.  The first time I went, almost a year ago, I felt very strongly there the presence of one of the Pagan Gods, the one who is my own patron deity.  I continue to feel His presence at those services, sometimes strongly, sometimes less so.  It can be vivid enough for the Christian elements that pop up in the services to be kind of jarring at times.

One Wednesday that I went was, by coincidence, the Christian observance of Ash Wednesday.  Being anointed on the forehead with ashes is something that I have done, long ago when I was much younger and still very Christian.  This being an Ash Wednesday observance, the usual Taizé service had been supplanted by a more conventional church service with the familiar hymns and sermon one expects at such things.  When the time came for the anointing with ashes, the priest spoke of it as a sign of humility, of acceptance of our mortality, and of our oneness with the dust of the Earth.  And sitting there as a Pagan, I was surprised to find myself in unity with that.  I would have felt fine, as a Pagan, going up to the Episcopal priest and letting her paint my third eye with ashes, but—and this is the surprising part—my Quaker sensibilities are what stopped me.  The ashes were an outward form of the sort that George Fox railed against, and being a Quaker, I chose to sit in silence with the spiritual reality of my oneness with the Earth and the cycles of life rather than go up and have my Pagan sensibilities given an outward and visible sign by an Episcopal priest.

This past month—a regular Taizé service again—they were anointing not with ashes but with oil.  This time the deacon spoke of it as a sign of comfort, and I felt drawn to go up and ask for the blessing.  Some of the people who went up obviously had specific things they wanted prayers for, and they spent a few minutes in quiet conversation with the officiant.  When I went up, I simply stood with my hands at my sides, palms forward in the gesture of a supplicant.  The officiant dipped his fingers in the oil, touched them to my forehead, and then said a prayer over me, a prayer of general blessing.  And he concluded it “in the name of the Father, Son, and Holy Ghost, amen.”

Imagine taking a spoonful of what you think is vanilla yogurt and finding that instead it’s sour cream.  It was that kind of shock.  Not bad… just… weird.

I sat down in my pew again feeling a little unsettled and wondering if I’d done the right thing.  I had accepted the blessing of a foreign God.

The Jews of the Old Testament and the Christians of the New are both very uneasy about that sort of thing.  Ancient Pagans, I think, were much easier with it.  When you are a guest, you honor the Gods of your host.  That seems only right and proper to a Pagan.  But again, my instincts in these matters are not wholly Pagan.  I’m also Quaker and I also was, for many of my formative years, Episcopalian.  So it felt weird.

Afterwards, walking around under the trees on a balmy fall evening, I knelt down by the side of the path and took a pinch of dirt in my fingers and anointed myself a second time, rubbing the dirt over the oil.  I am of the Earth, and my own Gods—Lord and Lady—are also of the Earth.  I felt it important to affirm that, to add their blessing to the one I’d received inside.

There’s no one message that I take away from this, and no particular lesson that I want to deliver by sharing the experience here.  It was just an experience—an occasion of listening (Quaker style) for the promptings of Spirit, and finding that Spirit coming to me in multiple and sometimes bewildering forms. 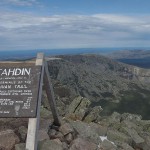 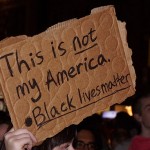 December 8, 2014 Discernment and the Spiritual Activist, Part I: Injustice
Recent Comments
0 | Leave a Comment
Browse Our Archives
get the latest from
Pagan
Sign up for our newsletter
POPULAR AT PATHEOS Pagan
1 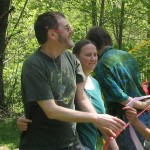 Introducing the Kindness Revival Sigil
Kindness seems to be in short supply lately, yet it's integral to...
view all Pagan blogs
What Are Your Thoughts?leave a comment
Copyright 2008-2021, Patheos. All rights reserved.