To the Pagan Community: A Love Letter

I have been trying for weeks now to write a post about something many Internet Pagans say does not exist: Pagan community.

To be specific, I have been trying to write about spiritual community among Pagans and across the theologies that often divide us, across what Internet Paganism increasingly sees as an unbridgeable divide between Wiccans, Witches, and Druids and the emerging polytheist community–or at least, the parts of modern Paganism that are not “Wiccanate,” to borrow the term of our critics.

That discussion is sometimes so heated that I’ve allowed it to get in my way here.  I keep writing elaborately constructed arguments, trying to convince people who don’t believe in it that this thing that has meant to much to me is real.

That’s foolish.  I’ve been writing defensively, not from my heart.

In truth, I can’t convince anyone of any such thing.  I can’t convince you that spiritual communities can exist across theological differences through logic, through mere evidence and argument.

Nor can I convince you of the existence of beauty, of true love, or of the gods themselves.  But if, like me, you’ve ever had your breath stolen away by the experience of any of these things, well, then, I don’t have to convince you.

Instead, I will share with you my love letter to the Pagan community I know.

I have lived my life as a Pagan sometimes surrounded by strangers, and sometimes by dear friends.  I have been to large gatherings of hundreds of Pagan folk where I hardly knew a soul, and where I had my heart stripped from me, broken down, and reassembled from spare and broken parts.  And I have participated in living-room Paganism where the scheming and deceit and betrayal were as intensely enacted as if we were fighting for whole kingdoms rather than a petty change in some tiny organization’s bylaws.

I know what it is to craft collaborative rituals with animists and reconstructionists.  I know how it feels to whirl beneath naked stars with dew on my feet in wild Wiccan ritual I’d never even heard about before.  I know what it is to raise a stone cairn to the gods, and I know what it means to gather with my people in the shadow of standing stones.

I’ve known anger and I’ve known love.  I’ve kept friends company before and after deaths, in intensive care and in the living room, waiting for the hearse to arrive. I’ve walked the labyrinth with a dying woman, and I’ve shared a quiet memory of a wife with her widower, there on the grass of the hill where her body lies.

I know what it is to be the clergy celebrating the marriage of people I love, and how to be the priestess who comforts a friend when a marriage dissolves. And I know how it feels to light a black candle of handparting for my own marriage, to watch it burn down with the man I was leaving, and then turn to my Pagan family for comfort afterwards.

I’ve gotten drunk on grape juice blessed till you couldn’t tell it from wine, drunk mead from a horn and

kissed the bead of wine from the tip of my beloved’s athame and made bystanders gasp at the tenderness of it.  I’ve shapeshifted and flown with the owl, danced with the spirit of the caribou, and I’ve camped in deep moss beneath the soft breath of pines.  I’ve scattered barley in sacrifice, burned a wish dolly or a lock of my lover’s hair in the Lammas fires, and written rituals for births and for deaths.

And I’ve sat around the campfire or in the dining hall late into the night, telling stories of those who passed through community before us, trading songs, and, yes, debating theology until we were all hoarse and exhausted.

But never, never have I cared what theology was attached to a hand I held, giving or receiving comfort.  I never stopped to ask if those who led the rituals that changed me believed what I believe (they don’t) nor refused community to those who came with their hands outstretched, whether they named themselves Wiccan or polytheist, Christian, atheist, or Jew.

Real community crosses boundaries. Real community has ragged edges: children and parents, lovers and spouses who don’t quite fit the easy boundaries we’re tempted to draw.  Instead, we learn to listen to what our hearts say: yes, you are mine, my heart knows you. No, you are not mine; you will not be my student. Yes, today you are my teacher. Yes, I will be your friend.

Real community is fearless–and needs to be, because it will hurt.  Sometimes, quite a bit. There are conflicts.  There is loss.  And then, there’s the thing we find beyond the loss.

In the end, I’ve not found spiritual depth to be about the words we speak about our journeys–once we’re past the 101 of it, those are about the containers for our spiritual lives.  Instead, for me, depth is what we get when we dare to remain open to one another, using our hearts to bridge the gulfs that are mostly in our minds. 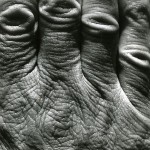