Where the Magic Lives

Last night, I held my husband’s hand as he was falling asleep.

One minute, as my fingers moved gently over his, the sense of him, of the essence that makes him who he is was right there under the surface, coded somehow in every callus, every line of his palm.  The next minute, his hand was just a hand: still warm and living, but also empty of the particular qualities that make him who his is, every bit as much as the smile in his voice or the flash of an idea behind his eyes.

That difference… is it magic?

My coven used to do an exercise.  We’d put on a recording of a drumbeat, go into light trance together, and then one by one, seek out the sense of each person’s presence.  One by one, as each member of the circle “found” another, we’d speak the names out loud: “Cat….” “Cat.” “Cat,” the voices would come in, one by one, with pauses in between.  “Peter…” “Peter.” And so on, round the circle, until each of us had “found” all the rest.

What was that thing, that shape without a form that we were seeking?

If you know it, you won’t need me to describe it–which is good, because if you don’t know it, I’m not able to describe it for you, no matter how I try.  I can feel when it is absent, though.  And I can tell you to seek it out, so you maybe can learn to find it for yourself.

I know lots of ways to describe this thing dismissively, rationally.  I could say that what I feel in my husband’s hand is no more than the tiny muscle movements that we lose when the paralysis of sleep overtakes us.  I could say that the sense of something similar was nothing more than the power of suggestion.  Certainly, I cannot prove that it is not.

But what I can be sure of is that being open to the possibility of magic has led me to encounter it more often, and to trust it more often.  If you’re a skeptic, you may have trouble understanding that this is genuinely a good thing.

A few years ago, my mother-in-law and I were getting ready to take a walk into town on a bright, hot day.  My mother-in-law was ahead of me, and I was still upstairs, putting on my shoes, when I saw her hesitate in the hallway below me, one hand on the knob of the front door.  Without thinking about it, I reached for a sun hat for her, and tossed it down in very much the same way a woman will lift a kettle off the stove when she hears it whistle.

“How did you do that?” my mother-in-law gasped, astounded.  She had indeed been thinking of turning back for a hat.  I’d simply read her body language correctly, if unconsciously, and tossed her a hat I understood she wanted.

Magic?  Or not magic?

The skeptic says, “not magic,” of course, and may well be right.  But then there’s another example:

One day, walking down the shady back street of the small town where I then lived, a maple tree called out a greeting to me as I passed.

I don’t mean it was verbal; I didn’t hallucinate.  The entire thing was silent.

How to describe what it is like, though, when a tree decides to say hello…  Those of you who have known cats will understand.  If you have ever had the experience of a friendly cat stroking your ankles with its fur, deliberately brushing up against you in greeting as it walks by…  it was like that.  Only without the physical sensation.  It was… the essence of that interaction with a cat, made large, and airy, and perhaps a little leafy.

Magic?  Or not magic?  Again, the skeptic says, “not magic,” and adds a few words on the power of self-suggestion or imagination.

Why should I accept one, and not the other?  Why would that make sense?

As a psychotherapist, I’d be listening, straining for clues about what my clients were feeling and needing, on those occasions they struggled to find words. And often, I would feel the feeling rising up first within myself–in my own body.  I would notice my shoulders cramped or my lower back stiff… and, if I paid close enough attention, I would see that my body had begun to mirror what my client’s body was doing.  I would listen inwardly, name the feeling my body was demonstrating within me, and ask my client if what I was sensing was correct: Anger.  Fear.  Shame.

Almost always, it was.

Magic?  Or not?  Of course, we can explain this simply as my being very observant of other human beings’ body language, on a subconscious, non-verbal level of my own.  And I do not think that that is wrong.  But not only has being open to the possibility of magic allowed me to develop that unconscious gift, it has given it to me in other settings.

This is the same intuition that allows me to feel the aura of a tree, or of another person.  Not only that, but, if you are like most people I’ve worked with over the years, I can teach you to do it, too.

You can feel the presence of a wall or a human being with your eyes closed, if you try.  They feel different, however.  It’s an important difference.  In other contexts, it’s one of the differences between a natural healer and someone who is not.

Have you ever had a back-rub or a massage from a really talented and empathic masseuse? Do you remember the almost eerie way the gentleness of a touch here and the firmness of a touch there unloosed knots you didn’t even know you had?

Have you ever had the other kind of massage, from someone whose hands are deaf, unable to sense your body in any but the most obvious and physical of ways?  No matter how many muscle charts they have memorized, no matter how much theory they have learned, someone with deaf hands can only touch you as if you–or they–were a wall.  They lack that extra sense that makes their hands into healing hands–hands that are fully present with you as they work.

A properly cast circle may have outward markers, but in my experience, it does not need them. If you listen, you should be able to sense the boundary in the same way you would the presence of another person.  It’s like a kind of gentle pressure on your skin.  (I was amazed, in fact, the first time I encountered a Witch who couldn’t do this, didn’t do it naturally.  Since she was attending circles that I cast, and since it was jarring as hell every time she barged through the edges of them, I insisted we spend a day together, working on the skill of casting and sensing, casting and sensing, over and over until she got it.  Which she eventually did… thank the gods.)

If you’re a Quaker, you can sense the power of what we call a “covered” meeting in a very similar way.

And when I’m opened, as I am after deep Quaker worship, I can feel the essence of another person in the touch of their hand on mine at rise of meeting.  Indeed, sometimes I feel that essence… and something More, and deeper.  I know that there are many ways to name that Something More.  But I also know that I encounter it in no small part through my openness to…

The kind that lets you sense the presence of your beloved, simply at the touch of a hand. 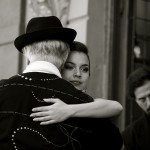