Quran: The Book That Weeps, Hidden Inside Its Shelf!

The Quran is truly an amazing book. If there is one investment I have made that I will never regret in my life, it is the time I invested in understanding the Quran. The thing about the Quran is that it speaks to me like no other book I’ve read. Such is the magnificence of the book that there is never a hollow reading session; each time I walk away with some truly amazing insights I overlooked before. What makes this possible is that there are, at least in my opinion, infinite layers to the Quran. The more time you spend with it, the more it seems to give you. And so, as I went deeper into the Quran, I was just mesmerized by its structure, cohesiveness, and the metaphors it employs that reflect my being so precisely.

What’s heartbreaking for me, though, is how Muslims have abandoned the Quran, turning it into an object of service. You don’t pay reverence to the Quran by kissing it and keeping it on the top shelf, covering it with beautiful cloths. No, that would be akin to showering your parents with hugs and kisses, but not paying any heed to what they ask of you. Would you not call such a relationship hypocritical and selfish? Indeed, you would. But that’s what our relationship with the Quran is: one of hypocrisy and selfishness. It is used as a tool to gain rewards by reading it in a language that most Muslims don’t even understand, and comes out of its fancy covering only at “blessed” times such as Ramadan, or at times of need – when someone has passed away.

As Ramadan is just around the corner, I implore you to read the Quran in a language you understand this time around, so that you could start disassociating cultural Islam from Quranic Islam.

Here is a passionate response I wrote, outlining all that is wrong with the way we approach the Quran:

What was supposed to be a book that would bring mankind out of ignorance towards enlightenment–bringing with it a revolutionary message–you revolve around it, not understanding a word of what it says.

What was supposed to be a book that was meant to transform your heart, you don’t even let it cross your brain.

What was supposed to be a book with a universal message, you utter religious statements in Arabic, somehow supposing that Arabic language is holy and advocate Arab supremacy.

What was supposed to be a book that discouraged dogmas, you drink from a glass of water that you blew Quranic verses in, expecting it to heal you.

What was supposed to be a book advocating skepticism and critical thinking, you fear that thinking in matters of faith may lead you away from Islam.

What was supposed to be a book discouraging sectarianism and promoting unity, you kill your fellow Muslims in its name, and yell “Allahu Akbar!”

What was supposed to be a book advocating freedom of belief, you disregard it and demand blasphemers and apostates to be killed.

What was supposed to be a book advocating pluralism, you feel threatened by differences and push for uniformity.

What was supposed to be a book prohibiting child and forced marriages, you justify them through fabricated accounts of the messenger and sometimes, your culture.

What was supposed to be a book that advocated self-control, you partially blame the women who are raped and hasten to cover your women from head to toe.

What was supposed to be a book that encouraged you to follow the character of the messenger, you have twisted it to imply following the cultural norms that were prevalent in the time of the messenger.

What was supposed to be a book that advocated activism, you remain passive and pray for divine intervention to happen.

What was supposed to be a book that was fully detailed, you attach numerous books to it – claiming, without these books, the Quran is incomplete and hard to understand.

What was supposed to be a book of values, you have changed it into a book of hollow rituals and shortcuts to heaven.

What was supposed to be a book advocating accountability for your actions, you have changed it into a book that will intercede on your behalf.

Sometimes, on a quiet night, I can almost hear the Quran weeping.

Will you then, embrace it holistically, and release itself from its sorrows? 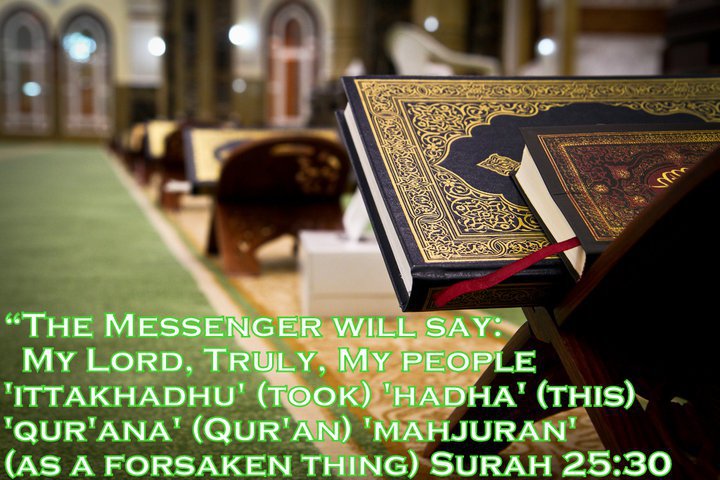 June 21, 2014 On the Language of the Quran
Recent Comments
0 | Leave a Comment
Browse Our Archives
Follow Us!

Muslim
A Short Summary of Al-Maida (Chapter 5) |...
Quranalyze It
TRENDING AT PATHEOS Muslim