Walking with Jesus through Lent: Take Up Your Cross and Follow

Walking with Jesus through Lent: Take Up Your Cross and Follow February 28, 2015 Rebecca Florence Miller

Thanks for joining me for another installment of “Walking with Jesus through Lent.” During this season of the church year, comprised of the roughly forty days between Ash Wednesday and Easter Sunday, Christians focus on the themes of repentance, mortality, and the need for salvation. Many Christians fast from certain pleasures during this time in order to demonstrate repentance or grow in faith. For Lutherans, this practice is not mandated but may be a helpful one for certain believers. To help us focus on the themes of Lent, this year I’ve chosen to meditate on the Gospel readings from the Revised Common Lectionary. Whether you are a longtime believer or a skeptic, I’m happy to have you along for the journey and for the opportunity to share with you these powerful passages from the life of Christ.

If you need to catch up, you can read the first post here.

Our passage for reflection for this week is Mark 8:31-38. In this passage, Jesus issues a challenging call to His disciples–those historically present with Him and those yet to come. This passage follows right after Peter’s confession of faith in Jesus as the Messiah (Mark 8:27-30). Jesus’s presence is compelling and drives us away from mere neutrality about Him. Lots of speculation about who Jesus really was was circulating. Some thought He was really a prophet come back to life again (note to self: some of the Jews in the time of Jesus believed in reincarnation???). Some may have also considered him to be a new prophet. Jesus won’t let any disciple of his merely kick around speculation about His identity. He lays it on the line for Peter: “But what about you?…Who do you say I am?” (Mark 8:29 NIV). Peter responds with a bold confession of faith: “You are the Messiah.” Wow. Seems like quite the declaration of faith!

But here’s the thing: the idea that Jesus’s disciples had found the Messiah was the glamorous idea. It was the power and glory idea. It was “we’re gonna beat the Romans to a bloody pulp and take back our earthly kingdom!”

The problem was, God had let the people of Israel, the covenant people, try that method before. They had overtaken the land of Canaan, killed lots of people, and gained a glorious kingdom by force. And where did it get them? They ended up forgetting God and turning to other gods. They got embroiled in all kinds of terrible deeds (David and Bathsheba, anyone?). They ended up experiencing God’s judgment themselves and being carried off into the exile.

It’s gonna sound like I’m being super hard on the Jewish people here. Trust me, I think we Gentiles would have done just as poorly with a glorious earthly kingdom. In fact, can’t we point to countless times in history when we too majorly screwed up too? The Jewish people are no worse than any other group of people.

When I think of earthly kingdoms, one of the dead horses I like to try to beat to death is this one: a lot of American Christians have got some major confusion as to what God’s kingdom really means. Like the ancient Israelites and like Peter (as we will see), too many of us think of God’s Kingdom as preserving a “Christian nation” on earth, electing the people who will give us a “moral utopia,” and fighting off the “godless heathens.” For too many of us, God’s Kingdom has become equated in large part to some earthly claims to power. And if we don’t have that power, we are desperate to get it back.

Tell an American Christian that being Jesus’s disciple doesn’t mean glory (at least right now), but the cross. We might nod our heads, but do we really get it? Do I really get it?

I am saved by grace through faith (Ephesians 2:8-9). But as a disciple, I am not transported to a life of ease and comfort. I am raised to new life, a life that is meant to be not just for myself but for God and others.

When Jesus begins to broach this topic of the cross with His disciples, Peter reacts like an American Christian (or maybe just like a human?). Mark tells us, “Peter took him aside and began to rebuke him” (vs.32). Hey Jesus, don’t you know you’re supposed to slaughter the Romans and raise up a glorious kingdom for all of us? Don’t you know that all of us disciples are destined for important political positions at your right and left hand? Don’t you know that we deserve this and it’s our nation after all?

Well, Jesus had some news for Peter. In fact, He was terribly stern with him. “Get behind me, Satan!” He says to Peter. “You do not have in mind the concerns of God, but merely human concerns.” 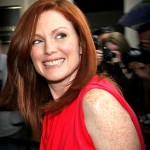 February 23, 2015
Julianne Moore's Short But Profound Statement at the Oscars
Next Post

March 9, 2015 Walking with Jesus through Lent, Pt.3: Jesus Stands against the Commodification of Religion
Recent Comments
0 | Leave a Comment
"And as many flavors of good and evil.That said, the Religious Society of Friends recognizes ..."
Alan Drake A New Normal: Grief and Facing ..."
"One of the reasons why there are many flavors of Christianity is because there are ..."
Jesse H A New Normal: Grief and Facing ..."
"I dreamed of being a Bible translator for a group of people who had never ..."
kyuss, cannabis farmer Runaway Radical: A Young Man’s Reckless ..."
"I gave a detailed reply why, but it was not approved. I did not ignore ..."
Alan Drake A New Normal: Grief and Facing ..."
Browse Our Archives
get the latest from
Evangelical
Sign up for our newsletter
POPULAR AT PATHEOS Evangelical
1

Can You Be a Baptist and...
Roger E. Olson
Related posts from Rebecca Florence Miller