Just a quick post for you bibliophiles out there. I read a lot of books every year. This year, in no particular order, here are some that really stood out. A number of them are not new books.

Turtles All the Way Down by John Green

I have struggled with OCD at least since my teen years, and this YA novel by John Green is the only fictional work I’ve experienced that really “gets” what it’s like inside my head at those worst times when the disease rears its ugly head. Green, an OCD sufferer himself, conveys us into the emotional experience of constant doubt and the nesting-doll-like search for the “real self” inside. Seeing in print someone who truly understood OCD from the inside as deeply moving. If you have OCD or you love someone who does, you should read this book.

The Fire Next Time by James Baldwin

Some have found this book angry. I found it shot through with love–not only for the black community in its plight, a plight sadly still quite similar to that in Baldwin’s day–but also love for the white person who is in bondage to their white supremacy. Baldwin longs to see everyone freed. (I also wrote about the film about him, I Am Not Your Negro, here.)

Be Fierce by Gretchen Carlson

Gretchen Carlson couldn’t have picked a better time to release her book about confronting sexual harassment. She didn’t know what a movement she began when she took her courageous stand against harassment by Roger Ailes. But she has emerged as a major leader in the fight to protect the dignity of women in America. What sets Carlson’s book apart is the depth with which she engages the topic, carefully avoiding sloppy inspirationalism for concrete, practical advice and genuinely moving empowerment. It inspired me to do brave things. It’s a book I will probably turn to again and a book I hope my daughter reads one day.

Mystery and Manners by Flannery O’Connor

I devoured this book over vacation and wrote about its relation to a Christian’s vocation as an artist here. It contains gems like this: “We are not content to stay within our limitations and make something that is simply a good in and by itself. Now we want to make something that will have some utilitarian value. Yet what is good in itself glorifies God because it reflects God. The artist has his hands full and does his duty if he attends to his art. He can safely leave evangelizing to the evangelists” (“Catholic Novelists,” 171).

This meticulously researched book (including data, statistics, fact-checking, footnoting, and the author’s prolonged experience embedded with both landlords and poor tenants in Milwaukee, Wisconsin) depicts the relentless forces of poverty that push poor people (both black and white) out of housing and keep them out, and it shows how eviction causes a further spiral down into ever-deeper poverty from which few have the ability to rise. Both systemic issues and the exploitation of slumlords to make a buck are depicted.

This was a heartbreaking but illuminating book about a lawyer fighting for the rights of people on death row, many of whom have had abysmal violations of their rights and must face a justice system ambivalent to their cries for just resolution. This book is an incredibly accessible read to share with family members or friends who may not quite understand the racial disparities in America today or the problems with the justice system. It breaks through barriers by not having a political focus but a human story focus. Stevenson’s faith is also a helpful bridge to the discussion. Hopefully, it will lead readers to learn more about the Equal Justice Initiative that he leads. I think it’s such an important book, I listed it on my resource list for people trying to learn about race, class, poverty, and justice.

Strangers in Their Own Land by Arlie Russell Hochschild

What happens when a liberal sociologist from Berkeley goes to Louisiana to get to know people all the way on the other side of the political divide? You’d think Hochschild would be fussy and superior and insufferable, but she’s not. She takes the time to listen to people, to hear their stories, to joke with them–and finds herself welcomed. Her account, which uses environmentalism as a keyhole issue to understanding conservative culture, is warm and empathetic. Most shocking to me were revelations of the kind of toxic waste that the residents of Louisiana must bear and the horrific effects this has had on their health. Most inspiring was their resilience in the midst of all of this. It has made me think more carefully about my use of plastics, knowing that some person in the South may be bearing the marks of my privileged choices in their own body. A great case study in engaging with your neighbor with respect.

On Writing by Stephen King

This might be the best book on writing I’ve ever read. The first third of the book is a writing memoir, which uses some key images and experiences from King’s life to show us how his formation as a writer came about. In his spare but vivid storytelling, he manages to all but entirely avoid telling, opting for showing instead. That he models how to write before giving advice on writing makes the advice that comes later all the more powerful. 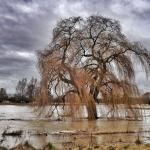 November 30, 2017
A New Normal: Grief and Facing the Brokenness in Evangelicalism
Next Post

The looming threats of Russia, Iran, and China
NOTE: Thank you to Dr. Ryan Denison for writing today’s Daily Article....
view all Evangelical blogs
What Are Your Thoughts?leave a comment
Copyright 2008-2021, Patheos. All rights reserved.
Close Ad