Am I Wrong About the Massacre of the Innocents?

First, let’s have some appropriate music to go with this post:

Tony Jones has suggested in a blog post that I am wrong in what I wrote about the massacre of the innocents.

He is wrong about my wrongness, and this post is to explain why.

The heart of the problem is that he is approaching the question as a theological one, not a historical one. That is the danger, I suppose, we all face when interacting across disciplinary divides.

Tony writes, among other things, “Like many liberals, he brushes off the deeper implications of the text in order to assuage his modern sensibilities…James wants to mythologize this story because that lets God off the hook.” He is mistaken about my motives. I am quite happy to acknowledge that there are disturbing, even horrific things found within the Bible. In this case, I expressed relief after the fact that the incident probably never occurred. But my reasoning is historical, and my reaction a response to the results of historical investigation.

And that is the main problem. Tony doesn’t discuss the case for the historicity or otherwise of the incident Matthew describes. He seems vaguely aware that there are some historical questions, when he writes,

The truth is that we do not know that innocent infants were killed. We have no record in any other source about this event. That doesn’t mean we can be certain it never occurred, and perhaps I could have avoided this misunderstanding if I had offered a lengthy introduction to my post. But I feared that if I did so, the point I wanted to focus on there would be lost in the process. And it seems from the comments on Tony’s post that most people who read my post did not misunderstand me in the way Tony did.

Ironically, because Tony has justifiable concerns that the text not be misused for theological ends, Tony ends up ignoring the crucial historical question, which has to be paramount when we ask what did or did not occur. We do not say that the Holocaust occurred because otherwise it would let God off the hook. We say that it occurred because the evidence is clear and undeniable, and includes people who lived through it. And if we ask whether Israelites invaded Canaan and slaughtered Canaanites, the answer to that question must be based on the historical evidence, not because it either does or does not let God or Israelites off the hook.

Tony is legitimately concerned that historical people not be turned into fables. But we must also have the reverse concern, that fictional accounts not be misconstrued as factual ones.

In this case, although it is possible that Herod killing a few children in a small village simply didn’t get mentioned by any other source, we cannot know that. What we do know is that we have two accounts of the infancy of Jesus which are incompatible in their details. And we know that most ancient infancy stories were mythological and symbolic ways of emphasizing a person’s importance without much historical information. And we know that Matthew was interested in highlighting similarities and differences between Jesus and Moses, and the irony of the poor reception Jesus got in Israel. And so a historian justifiably suspects that the infancy narrative is a literary creation intended to introduce major themes which will be to the fore in the rest of the Gospel – the story of an individual about whom it was believed that, if he was so significant, his birth must have been remarkable too.

And so the good news, for Tony, is that there are plenty of other texts and events where the historical evidence raises the issue. There is no need to insist on the historicity of ones which are doubtful or unlikely on historical grounds.

The bad news, for Tony, is this: 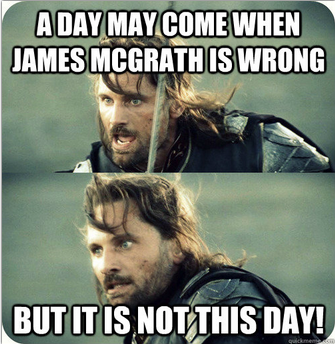 December 19, 2012 Last-Minute Gift Ideas
Recent Comments
17 Comments | Leave a Comment
"I did wonder about the possible consequences of the sudden introduction of massive rainfall on ..."
Sue Burnam Entering Strange New Worlds of Star ..."
"Alas, over here in the UK we haven't been able to see Strange New Worlds ..."
Scurra Entering Strange New Worlds of Star ..."
"Yeah - I think the important distinction is that places that are using "fakes" to ..."
Scurra Prehistoric Planet
"Thanks so much! While I'm not sure how many of the additional things that I ..."
James F. McGrath The Parables of LaGuardia Airport, the ..."
Browse Our Archives
Related posts from Religion Prof: The Blog of James F. McGrath