Roger Olson blogged today about a New York Times article about mainline Protestantism in the United States as a major historic force which has been neglected in recent years in favor of a focus on Evangelicalism and other vibrant newcomers. He offers a yes-and-no response to the question of the current vitality of mainline Protestantism. For instance, he writes:

First, by embracing inclusivism and pluralism old-line Protestantism convinced many of its own people and outsiders looking in that it lacked conviction—except perhaps with regard to “peace and justice” issues. But you can get those in many secular organizations. Why commit to a church for that alone?

Committing to a church has rarely been for one reason alone. Bad music has driven people away even from churches with good preaching – and vice versa. So the fact that it is not only churches which take a stand on peace and justice issues is scarcely relevant.

But I find troubling the notion that inclusivism and pluralism (normally understood as different options, but I won’t get into that now) are thought to be contrary to conviction. Of course, Evangelicals have long asserted that to be the case. But when Paul the apostle advocated the inclusion of non-Jews in the people of God, without even having to adopt all the requirements specified in Scripture in order to do so, that was surely an example of inclusiveness with conviction.

Being inclusive takes courage. So does standing with the downtrodden. So does standing up to spiritual bullying of the sort that Evangelicalism is infamous for, in which measured thought and nuance are treated as lack of conviction, and it is those who are most adamant that they are correct who are followed, rather than those who are seen to be right after a careful investigation of the evidence.

While Olsen is in principle right to emphasize that simply jumping on cultural bandwagons is spiritually unhealthy, the notion that this characterizes the mainline more than the conservatives is simply false. The emphasis on confidence rather than truth, the definition of belief as accepting without evidence, the sometimes egotistical focus on individual salvation – all of these are elements that reflect recent cultural developments rather than a historic stance. And so, if there is a danger, it is not one that any form of Christianity has sidestepped. And if the mainline has something in its favor, it is the honest recognition that simply rejecting a few select cultural trends does not make one truly countercultural, nor is rejecting the new always the right or the most truly Christian option.

Olsen seems to be aware of this when, ironically, he next criticizes the mainline for rejecting that which Americans desire, the personal and experiential. Olsen also regards Hedstrom’s acknowledgement of the debt of this emphasis to liberal Christianity “ludicrous.” It is true that many Evangelicals are unaware of how much the focus on individual decision owes to Bultmann and others who interpreted their Christian faith in light of existentialism. But his lack of awareness of the contribution of liberal Christianity even to his own tradition, albeit indirectly, does not make that historical reality “ludicrous.” A focus on the personal and mystical as opposed to the doctrinal and dogmatic has often characterized liberal Christianity.

I consider it an honor and a privilege to be part of the mainline tradition, with its courageous convictions about social justice, its openness to innovation in both that area and in theology, and its focus on the individual’s personal experience of God. At what seems to be a decisive juncture in the development of religion in the modern era, I am happy to be part of a tradition which is well poised to know that there are no simple solutions or clear-cut answers about which direction to head next, and that the solution is neither to simply follow popular trends or to keep particular cultural superficialities at bay. It seems to me ironic that a conservative Evangelical would criticize another religious tradition both for being too traditional and for being too ready to modernize. Conservative Evangelicalism has done both, although not always willingly, and rarely acknowledging the process, much to their detriment. 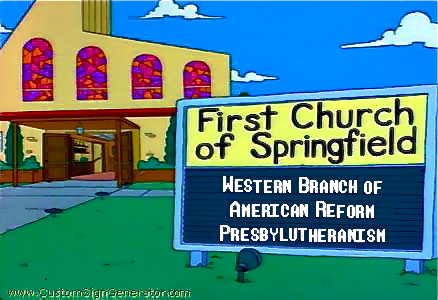