Progressive Christianity in the Spotlight

The Fountains United Methodist Church recently had the experience of a number of conservative churches in its area banding together to preach against progressive Christianity. They promoted the sermon series with signs and news articles promising a series of sermons on conservative fundamentals:

The Fountanins UMC church responded with a banner borrowed from another congregation: 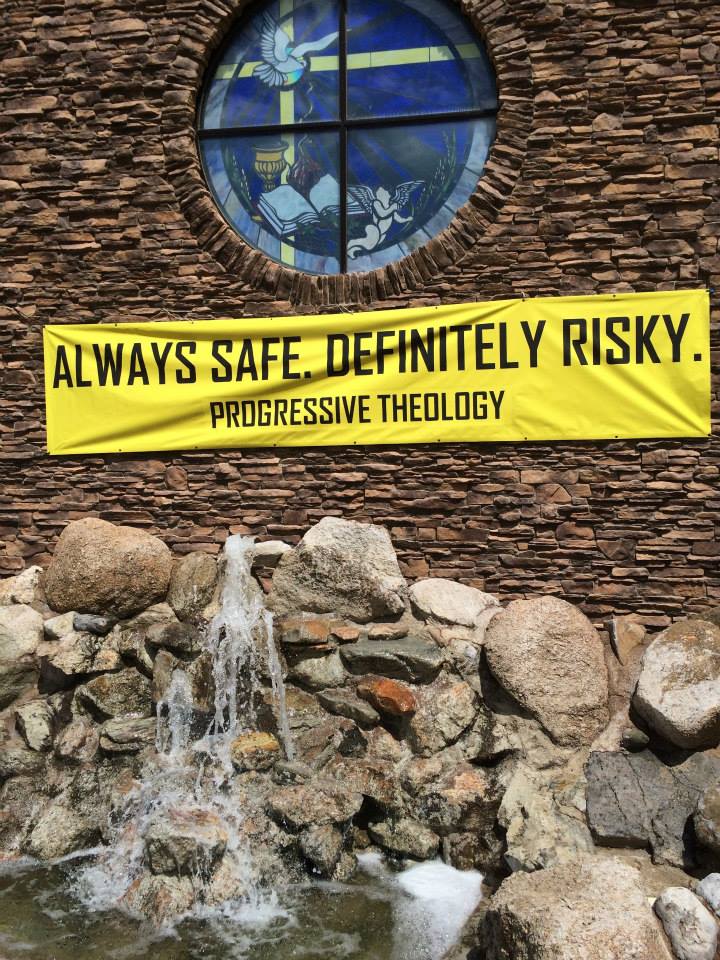 Eric Alexander blogged about this at the Progressive Christianity website.

And so I thought that a post highlighting these events, and offering support for the church and the progressive Christian tradition, was in order. Rather than repeat things I’ve said before, I will direct people to those earlier posts for a basic introduction to what “progressive Christianity” means and why I self-identify as one, as well as the Patheos Progressive Christian Channel. And then, building on that, I would like to say a few more things on the subject, together with a round-up of quotes and links to recent blogging and news on this topic. I won’t offer a definition, except to say this: Progressive Christianity is a broad tradition, encompassing all forms of Christianity which honestly acknowledge that being a Christian is not merely about preserving things from the past, but innovating, revising, reforming, and creatively engaging with the present as well.

Progressive Christianity is a great option for those who feel the intellectual appeal of many of the points that atheists make, but find their exclusion of spirituality unattractive and unnecessarily reductionist. Most of the critical elements many in our time associate with atheism – challenging anthropomorphic depictions of God, not just embracing but promoting science, recognizing historical and moral issues in the Bible – are in fact borrowed from liberal Christianity.

The number one cause of atheism is Christians. Those who proclaim Him with their mouths and deny Him with their actions is what an unbelieving world finds unbelievable.

But I do think that atheism would seem less attractive an option to many if a Christianity which is skeptical of the miraculous, committed to reason, and equally committed to living lives of love and self-sacrifice. Nonetheless, not all will find it appealing – although sometimes that is because of the way their thinking has been previously shaped by fundamentalism. I wonder whether that is the case in Libby Anne’s reaction to my recent meme featuring a quote from Rachel Held Evans.

Having mentioned skepticism of claims to the miraculous, and so perhaps it is about time that I shared the interesting discussion that took place a while ago between Antonio Piñero and Thomas W. Hudgins about whether Jesus performed miracles (HT Henry Neufeld).

Progressives are open to revising theology (and beliefs more generally) in light of new evidence. Along these lines, let me share a link to a recent article about Unitarian Universalism, which included this as #6 on a list of ten things the author wanted people to know about that tradition:

We’ve revised our view of God — and of everything else.

The ancient Greek physician Galen, the so-called father of medicine, lived nearly 2,000 years ago, when the ideas in the Nicene Creed (the main creed of Christianity) took shape. Galen made advances in physiology and surgery, but I’m glad my own physicians no longer consult his recommendations. He championed bloodletting, among other archaic practices.

In a word, God is the experience of possibility.

I also thought I would share a quote here that I also included in something I recently wrote for publication. The quote comes from “Truth “Once for All Delivered” or a Living Theology,” an editorial in The Biblical World, Vol. 35, No. 4 (Apr., 1910), pp. 221-222:

[T]he duty of Christian thinkers in the present generation is to address themselves consciously and earnestly to the task never indeed abandoned, but long held in check by the doctrine of an authoritative canon of Scripture or an authoritative church, and to seek from all the sources at our disposal to frame for our day such a statement of truths in the realm of religion as will on the one hand satisfy in the fullest possible measure the data at our disposal and on the other hand meet as fully as possible the needs of our day… In this process the true greatness of Jesus and the finality of his fundamental thought will not be lost, but only transferred from postulate to assured result of investigation. But no period and no experience, certainly not that of our own day, will be without its possible contribution, and our effort will be not to return to the position of any past age, even that of the dawn of Christianity, but with fullest loyalty to the achievements of the past to push on as far as possible toward the larger light and fuller truth.

Some, like John Shuck, would even go so far as to call themselves atheist Christians.

Progressive Christianity is a broad fellowship of all of the above, and more – people committed to preserving what we find valuable within the Christian tradition, but also recognizing the need to adapt and innovate. We are committed not only to that process, but also to remaining in fellowship with others involved in the same process, even though our conclusions and adaptations may not be the same. As Richard Beck recently put it:

Disagreement is what makes community a real community.

While some conservative Christians are responding to these emphases by attacking them, some are seeking to learn from them. A recent post by Ian Paul highlighted a book which recommended greater humility among Christians, and openness to learning from those with whom one disagrees. And Eddie Arthur wrote, “if we ever get to the point of saying that only those people who agree with us and behave like us are real Christians, we are undoubtedly mistaken and need to get out more! Doctrinal rigour needs to be matched a generous and humble spirit.”

Progressive Christians, however, are open to going as far as needed, and to revisiting and revising historic beliefs. Derek Flood puts it nicely:

The simple fact is, obedience absent of reflection or understanding inevitably leads to abuse. We therefore cannot unquestioningly follow the New Testament or even Jesus. Instead, we need to learn to adopt how Jesus approached both life and Scripture, adopting his method of faithful questioning motivated by love and compassion.

As moral adults, we should not simply unquestioningly accept whatever the Bible says (including the New Testament), nor should we unquestionably accept whatever our culture says is right (whether from the left or the right). Rather, we must learn how to step into the dispute — both within the pages of the Bible, and in the public square — and make our case for what is good. This is exactly what we find Jesus doing in his time, and for those of us who call ourselves his followers, we need to learn how to do the same in ours.

The term “Progressive Christianity” also may include Christians who may be more or less conservative with respect to doctrine, but are politically progressive. On that topic, I would note Jeff Carter’s post about the allegation the president Obama disagreed with Jesus. When Jesus said “the poor you will always have with you,” it is generally agreed that he was alluding to Deuteronomy 15:11, which emphasizes that, since poverty cannot be eliminated entirely even by radical social institutions such as the Jubilee year, therefore one should never cease to be generous. It is ironic that conservative Christians attack those who actually understand what that verse means when interpreted in the context of the Bible as a whole.

Charity is not the solution to issues of poverty. Nor is leaving government and the economy uninfluenced by our presence without calling for greater justice. Systemic problems require systemic solutions, and economically progressive Christians are committed not merely to seeing the rich benevolently give some of their wealth to the poor, but to changing social structures to reduce or eliminate poverty’s root causes. A quote I recently came across by Muhammad Yunus makes the point well:

Poverty is not created by people who are poor. So we shouldn’t give them an accusing look. They are the victims. Poverty has been created by the economic and social system that we have designed for the world. It is the institutions that we have built, and feel so proud of, which created poverty. It is the concepts we developed to understand the reality around us, which contributed to the creation of poverty, made us see things wrongly, and took us down a wrong path, causing misery for people. It is our policies borne out of our reasoning and theoretical framework, with which we explain interactions among institutions and people, that caused this problem for many human beings. It is the failure at the top, rather than lack of capability at the bottom which is the root cause of poverty.             The essence of my argument is that in order to reduce, and ultimately eliminate, poverty we must go back to the drawing board. Concepts, institutions, and framing conditions which created poverty cannot end poverty. If we can intelligently rework these framing conditions, poverty will be gone, never to come back again.

CREDO
I believe in God
who created the world not ready made
like a thing that must forever stay what it is
who does not govern according to eternal laws
that have perpetual validity
nor according to natural orders
of poor and rich,
experts and ignoramuses,
people who dominate and people subjected.
I believe in God
who desires the counter-argument of the living
and the alteration of every condition
through our work
through our politics.

I believe in Jesus Christ
who was right when he
“as an individual who can’t do anything”
just like us
worked to alter every condition
and came to grief in so doing
Looking to him I discern
how our intelligence is crippled,
our imagination suffocates,
and our exertion is in vain
because we do not live as he did

Every day I am afraid
that he died for nothing
because he is buried in our churches,
because we have betrayed his revolution
in our obedience to and fear
of the authorities.
I believe in Jesus Christ
who is resurrected into our life
so that we shall be free
from prejudice and presumptuousness
from fear and hate
and push his revolution onward
and toward his reign

I believe in the Spirit
who came into the world with Jesus,
in the communion of all peoples
and our responsibility for what will become of our earth:
a valley of tears, hunger, and violence
or the city of God.
I believe in the just peace
that can be created,
in the possibility of meaningful life
for all humankind,
in the future of this world of God.
Amen

Let me conclude, for those who’ve read this post all the way through, with an episode of Last Week with John Oliver that is relevant to the topic of social structures that maintain poverty and which we regularly fail to notice, and thus fail to challenge.

May 18, 2015 Is There Intersexuality in this Periscope?
Recent Comments
64 Comments | Leave a Comment
Browse Our Archives
Follow Us!