God as a Mystery Our Brains Cannot Comprehend

God as a Mystery Our Brains Cannot Comprehend May 17, 2015 Libby Anne

I recently came upon this image: 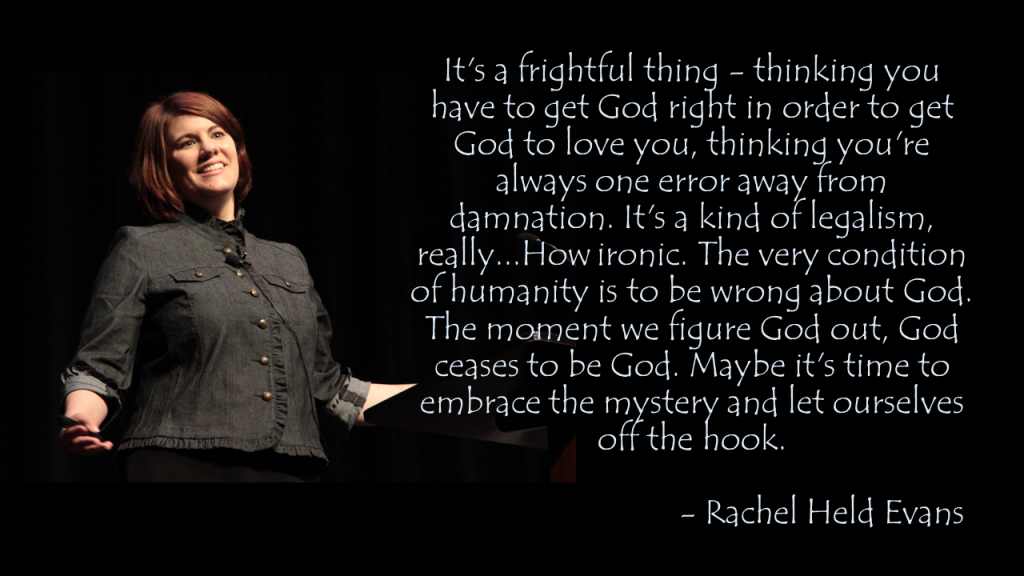 It’s a frightful thing – thinking you have to get God right in order to get God to love you, thinking you’re always one error away from damnation. It’s a kind of legalism, really. . . . How ironic. The very condition of humanity is to be wrong about God. The moment we figure God out, God ceases to be God. Maybe it’s time to embrace the mystery and let ourselves off the hook.

On one level I understand. I like being able to embrace the questions and not have all the answers! I spent twenty years thinking I had all the answers, and then a few years after that desperately trying to find them. It’s not that I don’t have any answers—I’ve sorted out a lot of things to a point where I feel comfortable with them—but rather that I enjoy not having to have the answers.

But on another level, this makes me really really uncomfortable.

Really, you ask? How can this be? Aren’t fundamentalists all about having the answers, with settled doctrine laid out to the nth degree? Well, yes, yes they are. But ponder this conversation for a moment:

“God is one person and three people. How does that make sense?”

“Think of it like a triangle. It has three corners, but is one shape.”

“Think of it like an apple. It has a peel, the flesh, and a core, but together they are one apple.”

“The trinity is a mystery that our human brains cannot fully grasp. You just have to accept it.”

I spent a lot of time, growing up in a conservative evangelical home, simply accepting things, because they were a mystery that our brains cannot grasp. In other words, “it’s a mystery” was used to silence questions. Indeed, saying that something was “a mystery” our human brains could not grasp exempted it from questions.

I suppose on some level these two statements really are very different:

“God is a mystery our brains cannot understand, therefore you have to accept this list of doctrinal positions whether or not they make sense to you.”

“God is a mystery our brains cannot understand, therefore it’s okay if you don’t get the whole doctrine thing exactly right.”

I appreciate that progressive Christians don’t use this “God is a mystery” statement to shoehorn people into accepting a specific set of doctrine, I really do. Perhaps the problem is that when I hear this “God is a mystery our brains cannot grasp” rhetoric coming from progressive Christians, I think of myself and my own journey, and the way this rhetoric made me feel boxed in.

I tried very hard to maintain my faith before I finally let go of it. And honestly, once I let go it just disappeared. But why did I give up? Why did I let go? Because, I think, holding together the many contradictions I experienced became too difficult. The thing is, I knew I could give up on trying to make things make sense and declare it a “mystery” that my human brain could not grasp. I had already done that plenty of times as a conservative evangelical. I knew I could do that as the progressive Christian I had become, and for a while I did. But it became too much for me.

The progressive Christian’s embrace of mystery stands in stark contrast to the atheist’s decision to jettison mystery. Some of us look at the contradictions, and it becomes too much. We’d rather solve the mystery than embrace it. How many mystery novels have you read where the mystery remains unsolved at the end? Mystery is a well-loved genre because in the end you get to see how all the pieces fit together. Some of us want to try to complete the puzzle, rather than leaving the pieces in a jumble and embracing the chaos.

I am very glad many people find room to breathe and explore within progressive Christianity. Truly, I am! I just didn’t find the call to “embrace the mystery” as comforting as others seem to, perhaps because for me it began to seem as though this rhetoric had the same goal as that of the rhetoric I heard growing up—to get me to believe something that does not make sense to me, just because.

It wasn’t just fundamentalist or conservative evangelical Christianity that ceased to make sense to me. Progressive Christianity didn’t make sense anymore either. I didn’t go straight from evangelical to atheist, I actually explored Catholicism first. I found much about it that I liked, and over the course of my time as a Catholic I found myself moving from conservative to progressive, finding role models across that spectrum. Before my faith picked up and left, I was a universalist. I understood the history of Christianity and the huge variety of Biblical interpretation and understandings of the Bible—I found all of this fascinating.

What bothered me was that my experience didn’t line up. I had trusted God on some things I thought he was telling me, and those things turned out to be flat wrong. And no, I hadn’t simply “misunderstood.” I was no longer sure that I was able to listen to God and hear what he was saying to me, because I couldn’t tell his voice apart from my own internal monologue. Suddenly the “mystery” became painful. Was God playing a cruel joke on me? In the midst of this, all those times I had let go and embraced “mystery”—whether as a conservative or as a progressive—began coming back to haunt me. “It’s a mystery our brains cannot understand” began to feel coercive. It hurt.

And so I let go, and with that the pain disappeared and the clouds lifted. I unleashed my brain on all of the things I’d told myself were “a mystery,” and rejected the idea that the problem was that I just couldn’t understand them. I trusted myself, and my ability to think and reason, and I ran wild on the newly open theological terrain before me like a small child in a meadow. It’s not that I had all of the answers, it’s that I was finally able to go looking for them without turning myself back at the gate.

In the end, “your human brain can’t understand the mystery that is God” became a cage—regardless of who was saying it—and it was only when I managed to say “no, I don’t believe that” that I was able to fly from the cage.