Good morning, and welcome to yet another end of the world. As you have probably heard, the end of the world has been predicted as occurring today, as has been done so many times before. This time the one offering the prediction is a man named David Meade, and it involves the non-existent planet Nibiru.

I was pleased when Randal Rauser blogged a while back about the pamphlet “88 Reasons Why The Rapture Will Be In 1988.” I encountered that piece of creative yet inaccurate predicting of the end times in my teens, and I am certain that that has (appropriately, I think) influenced my thinking about other such predictions.

And so let me reshare here an excerpt from a blog post that I wrote in 2011, “Why There Will Be No Rapture” (updated to refer to David Meade rather than Harold Camping):

It does not make sense for Christians to continue to expect a literal “second coming” of Jesus.

, “An event that has been just around the corner for a thousand years is a non-event. Thinking Christians should not behave as if the Parousia was a genuine possibility” (p.196).

Jesus expected the arrival of the kingdom of God in the lifetime of his hearers (see Mark 9:1), and the earliest Christians shared that expectation. When it did not materialize as anticipated, they found a variety of ways of making sense of that. But today, quoting 2 Peter 3:8, which is itself part of a non-authentic letter attributed to Peter and is trying to address the disappointment of Christians that these expectations were not fulfilled, is simply to perpetuate the problem and not address it directly.

It isn’t just the timing that is the issue. The idea of a second coming with Jesus appearing in the sky is based on a view of the universe, which heaven literally “up there,” that is also hard if not impossible for anyone to accept today without serious cognitive dissonance.

Discussing the literal ascension Luke describes in Acts, Keith Ward writes in his book The Big Questions in Science and Religion

(p.107): “We now know that, if [Jesus] began ascending two thousand years ago, he would not yet have left the Milky Way (unless he attained warp speed)”.

A time eventually comes when, instead of clinging to older beliefs, no matter how central they may have been historically, it is time to rethink them, and perhaps even set them aside in some cases.

The best antidote for preventing future frenzies of the sort that  David Meade is generating, is to recognize that they are indeed trying to revitalize something that Christians have historically expected, namely a literal, physical, second coming of Jesus, and to explain why that expectation needs to be reinterpreted or set aside, since after some 2,000 years and in a universe much bigger and very different than anything the early Christians imagined, it no longer makes any more sense to take that literally than that the sun literally stood still at Joshua’s command.

You can read the rest here. See also my 2012 blog post on why the futurist interpretation of the Book of Revelation is so popular in the United States. And the FAQ for students in case of rapture.

What was your first end of the world? I will share once again the card for you to get stamped every time you “survive a rapture.” 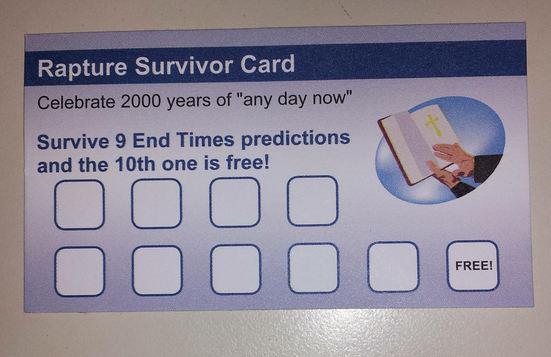 This image is also worth sharing again on this occasion:

The Babylon Bee has poked fun at all of this in an article appropriately called “18 Reasons the Rapture will be in 2018.”

Finally, here’s another 2017 end of the world prediction that came to my attention via social media a while back. 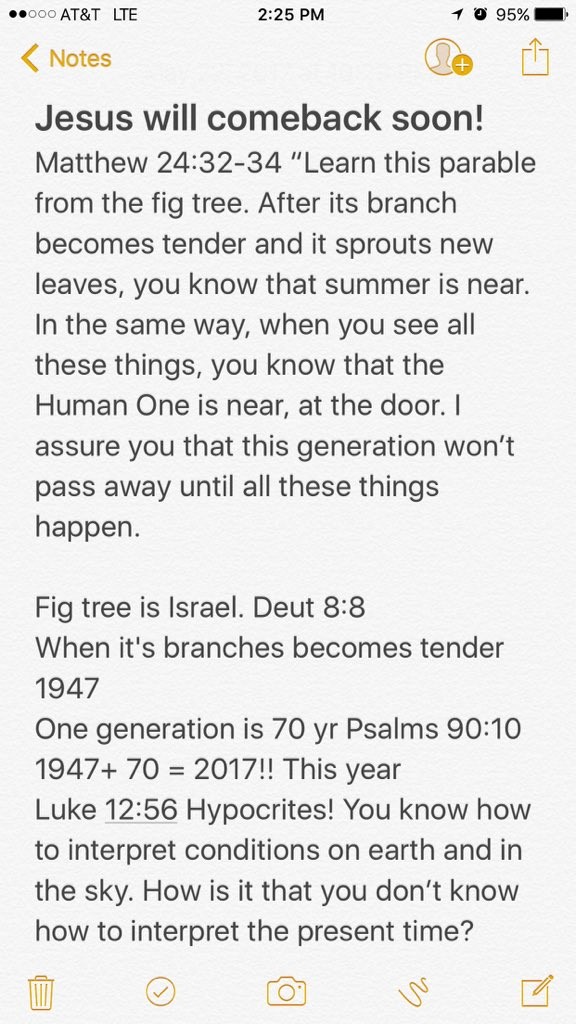 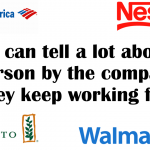