On the Books & Culture website, Stephen H. Webb reviews Richard Mouw‘s latest book, Talking with Mormons: An Invitation to Evangelicals. Steve and Rich are both friends of mine. Here’s how the review begins:

Richard Mouw, president of Fuller Theological Seminary, has two goals in this book. First, he wants evangelicals to stop demonizing Mormons. Second, he wants Mormons to be more Calvinist in their theology.

With the first goal—which will certainly provoke disagreement from some evangelicals—I am entirely in sympathy. I am convinced that we should take Mormons at their word and acknowledge the sincerity of their conviction that Jesus Christ is 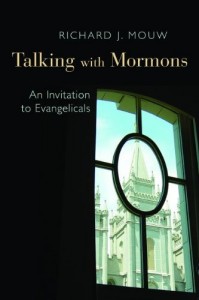 their Lord and Savior.

By now we should know better than to judge fellow followers of Jesus by the quality of their philosophical speculations rather than the fruits of their faith. Before long, we may hope, religious prejudices against Mormons will go the way of the once widespread prejudices against Roman Catholics. Mouw’s book, written by an insider who can speak with sympathy to Mormon-despisers, will help to bring that about.

Mouw’s second goal is a different story. That he—as a Calvinist—would like to see Mormonism become more Calvinistic is hardly surprising, but the two traditions make a very odd couple. The Mormon imagination is edgy and expansive while Calvinism is restrained and ascetic. Mormonism is a compendium of every 19th-century religious movement, including restorationism, apocalypticism, hermeticism, and even a healthy dose of liberalism. It is almost as catholic as the Roman Catholic Church—and that, for Mouw, is precisely its problem. After all, both Mormons and Catholics believe in the historical development of doctrine, divinization as the form of salvation, the need for centralized religious authority, the beauty of ritual, the connection between faith and love, and the existence of a heavenly Mother.

Calvinism, by contrast, is theologically lean and clean. Calvinism teaches “[t]hat God is sovereign and totally ‘other’ than the creation; that human beings are depraved sinners who are desperately in need of rescue by God; and that salvation is by grace alone.” Mormons fail the Calvinist test because they believe that, as Mouw puts it, God and humans are “of the same species ontologically.” Mormonism went wrong not with the Book of Mormon but with a flawed metaphysics.

If You're Angry About the Looting...
Steel Magnificat
Related posts from Return to Rome