It has often been said the the United States was founded on immigration. And that is true. Its also true that each wave of immigrants has been blamed for all sorts of social problems. But is it true that each is eventually assimilated into being American? No.

Certain communities have never really been granted the status of “Americans.” Oh, they may be citizens, vote, and have lived here for generations. Yet in a significant part of the public mind they remain resident aliens, foreigners and trouble makers against whom “real” Americans can direct their frustrations and grievances.

The most obvious group of forever immigrants regarded as threatening the social order and the well being of “real” Americans is African Americans. Having been freed from slavery 80 years after the founding of the Republic, granted real civil rights and equality only 100 years later, they are still regularly stigmatized as bearers of cultural difference (in endless debates about hair, baggy pants, music, “attitude”, family life, and so on).

Perhaps the longest standing forever immigrants in the US are Jews. Having barely been included as citizens when the nation was founded their outsider status was renewed again and again in waves of anti-Jewish hatred and exclusion. Until the mid-20th century and beyond Jews were excluded from most US private clubs, almost all US hospitals, and virtually all private schools. When Jews have succeeded in integrating into society they instantly become the target of conspiracy theories (“look who controls the media, banking, etc etc.”)

Even today well meaning Christian pastors find it impossible to distinguish American Jews from the people referred to as Jews in the New Testament, promulgating a sense that they are a kind of free floating independent nation rather than acknowledging them as just Americans. And Jews who choose to maintain a visibly distinctive culture and lifestyle (Has 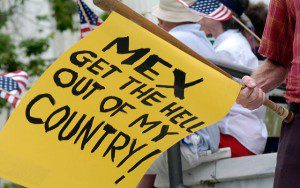 sids for example) find themselves regarded as at best picaresque and at worst as strange and alien.

Latinos are another group who, by continual association with undocumented workers arriving from Latin America, have become permanent immigrants in the public imagination. Words like “illegals” and “Mexicans” are swept across a growing and diverse community to justify treating everyone with brown skin and a Spanish surname as “aliens” who threaten some imagined American culture and the employment possibilities of “real” Americans. Being bilingual, a real strength in business and diplomacy to which all Americans should aspire, is taken as a sign of being “foreign.’

The most bizarre and destructive treatment of people as aliens in America is found in attitudes toward Native Americans. Assaults on the integrity of Native American culture aimed at destroying it altogether have come from both Christian missionaries and also from successive US governments. The result has left communities impoverished and politically weak. Yet even as they struggle to hold on to the places that were theirs long before European settlers came they are treated as if they were somehow aliens depriving “real” Americans of their right to exploit those lands.

And the newest forever immigrants are the Muslims. While substantial numbers of Muslims migrated to the United States in the early 20th century, and at least some have been present since the American revolution, Americans continue to treat Islam as an alien religion and Muslims as recent immigrants. Again the common theme is the claim that Muslims disrupt American ways of life, threaten American culture, and when the come as refugees cost Americans jobs.

Even as I write yet another piece of legislation will be put before the Texas legislature setting up a group to examine whether Muslim legal advisories are a threat to America, an effort supported by the mayor of Irving despite or more likely because of the large Muslim community in her town. This is a follow up to efforts to declare Islamic ethical mandates a “foreign law” that must be banned in the United States. Republican politicians (and now the White House) regularly claim that Islam is a political ideology rather than a religion and deny that Muslims can be Americans even as they seek to deny Muslims their constitutional right to freedom of religion. Some Americans don’t even want Muslims to bury their dead on their American soil. See Farmersville.

It is an odd and troubling thing that a nation of immigrants, and proudly of immigrants, should now see itself as a nation with immigrants, and indeed a nation with an immigration problem. Our founders thought they were bringing something new into being; not a nation built on ethnicity and some associated culture as found in Europe, but on those things that are the common inheritance of all humans. Now we have a President who admires the kind of European nationalism that is exactly the opposite of the values on which this nation was founded, and which is the source of most of the 20th century’s misery.

The only way to remain true to the vision of our founders is to embrace an ever growing diversity of human ethnicities and cultures living within and up to that common inheritance of human persons articulated in our constitution. A nation of forever immigrants, never even allowed into the “melting pot,” can never be the America our founders dreamed of, or these forever immigrants long for.

And for those of us who imagine that we are the real Americans? The forever immigrants are slowly becoming, well, “most of us.” If we do not let them into our understanding of what it means to be an American then we’ll become an ever more embattled minority. The only way America can feel at home for any of us is for it to be a home for all of us.

February 21, 2017 The Dis-Uniting of Methodist Christianity - When Dialogue Fails
Recent Comments
0 | Leave a Comment
"Thank you for your opinion. I found it hard to believe the book. I wonder ..."
Anne-Liv Gamlem Face to Face with Jesus (A ..."
"For more on that, see Stephen LeDrew's The Evolution of Atheism.For a brief summary:https://doi.org/10.1016/j.s..."
Joseph Langston Atheism and the New Conditions of ..."
"Late to the party, as usual. Oh well.British historian Callum Brown (2017) attacked Taylor's exposition ..."
Joseph Langston Atheism and the New Conditions of ..."
"but overcoming that ignorance is why I am helping you. https://uploads.disquscdn.c..."
Bishadi The Anti-Semitism in the Heart of ..."
Browse Our Archives
get the latest from
Best of Patheos
Sign up for our newsletter
Related posts from Robert Hunt: Interfaith Encounters

The Truth and Grip of Feelings
Once awake, an essential path of learning is the art of being...
view all Interfaith blogs
What Are Your Thoughts?leave a comment
Copyright 2008-2021, Patheos. All rights reserved.