The Dis-Uniting of Methodist Christianity – When Dialogue Fails

Christian Churches, from local congregations to Annual Conferences (or Diocese or Presbyteries or Synods) to national and international organizations are almost invariable run by people who started by studying theology. The Bible and Theology are their hammers, and that often makes everything a doctrinal nail.

Its Not You I Hate, Its What You Believe

Take the current problems of the United Methodist Church – which after a divisive and often angry General Conference last year has spawned a commission to work out some resolution of the conflict over marriage and ordination of gays. The bitter fighting over this issue, played out across multiple Facebook pages (United Methodist Clergy, The New Methodists, and others), blogs, and the denominational press inevitably focuses on doctrine. Progressives and Conservatives (to choose two possible labels for the opposing sides) fight over doctrine of scripture, interpretation of scripture, the authority and meaning of the creeds and traditions, the role of the Book of Discipline, and the influence of popular culture on Christian self-understanding.

Unfortunately, as they say in family systems analysis, doctrine is the presenting problem, not the cause of conflict. And when the two sides finally mutually anathematize each other and cast each other out the conflicts will remain within both.

Why Can’t We all Just Get Along?

Another take on the United Methodist situation is that the real conflict is political. It is hardly a secret that large churches and large church pastors chaff under the yoke of a national church organization that many regard as profoundly dysfunctional, needlessly expensive, and hopelessly partisan. Constant fights over what they see as settled matters of doctrine and polity only increase their sense of alienation and frustration. And they are joined by hundreds or even thousands of smaller congregations who see the apportionments paid to maintain the United Methodist hierarchy as a threat to their own financial stability for which they see little return in terms of services provided.

This is an important reason that more than 1000 church leaders flocked to Chicago for the organizing meeting of the Wesleyan Covenant Association, a group that made important public statements on doctrine, but which also laid the political groundwork for pulling out of the United Methodist Church and relieving its members of its onerous financial obligations and oversight. Their statement on the Bishop’s Commission on a Way Forward essentially dictates in political terms the only acceptable political “way forward” and mandates division if their demands are not met. https://wesleyancovenant.org/wca-statements-and-beliefs/.

And they are both responding to and provoking the political demands of their opponents in terms of the future polity of the United Methodist Church, and the rebellion of several annual conferences and the Western Jurisdiction. Neither group is willing to be under a common discipline any longer.

The United Methodist Church has slowly evolved, as has American society as a whole, into having two significantly different cultures. These cultures are not rooted in ethnicity or economic location or social origins. Nor are they defined by conscious rational choices over doctrine. (If they were there could be fruitful and rational conversations over doctrine, something that has been absent.)

The two cultures are defined by their different experiences of what it means to be human in relation to reality as a whole, including or consisting of God. And this difference of understanding doesn’t arise from rational reflection, but from an instinctual positioning of themselves with relation to every event and experience of living in the world. Put another way, like all humans, members of both groups knew what it meant to be human long before they could articulate or rationalize their self-understanding and understanding of those around them.

Indeed, their cultures (like all cultures) provide an explanation for why some people have a different culture – explanations that like all cultural explanations delegitimize the “other” in whatever realms there are overt or hidden disagreement. And of course, assuming both are Christian, they each have their own inculturated (and thus self-affirming) versions of the gospel. Because all consciously known, rationally articulated understandings of what it means to put faith in Christ as a human person are inextricably embedded in cultural ways of knowing.

There is no gospel without culture, and where cultures are in conflict over the basic conditions that allow persons to be human in relation to others and God then it will be manifest in Christian social structures (and thus emerge in political conflict) and will be articulated and rationalized in Christian doctrine (and thus theological conflict.)

The differences between the main two claimant cultures to United Methodism would be a curiosity to be observed through the lens of a National Geographic documentary if it weren’t for the fact that both cultures exist throughout the denominational structure. Indeed the differences are of less consequence than one might imagine at a congregational level. People who are close to one another (as in the multi-cultural neighborhoods and even nations across the world) can usually work out how to live together despite cultural differences. The wedges between them in understanding what it means to be human can often be taken outside the community, or rendered less overt, or just ignored.

But this isn’t possible at higher levels in the hierarchy of United Methodism. Decisions about marriage and ordination are linked at a fundamental level to cultural understandings of what it means to be human and conflict is thus inevitable. Yet in these cases decisions must be made, and from decisions divisions inevitably appear. In political systems (which is all human social systems) winners and losers in the distributing of power through decision making also appear. In the current UMC this is a zero-sum game, so our system can’t deal with real cultural diversity.

What is a pity, as dissolution becomes inevitable, is that United Methodists seem unaware that this cultural division within the US is far from the only cultural difference within a multi-cultural and worldwide church. Americans may find doctrinal agreement with United Methodists in Africa, but this doesn’t signal a common worldview and understanding of what it means to be human in the world. It simply puts off the inevitable conflicts within the different factions until the political dust has cleared. Temporary alliances around a poorly diagnosed presenting cause in the system called United Methodism will not remove the tension and discord in the system.

So, we might ask, what is the source of that tension? Cultural differences about what it means to be human have been part of human living in society for much of human history. We United Methodists have adapted to multi-cultural realities in the past.

I would suggest that the source of tension and discord in the United Methodist system isn’t caused by cultural conflict. The tension and discord come about because it is becoming overtly obvious within all United Methodist cultures that our gospel is inculturated. And this deeply problematizes the universal claims that make up the supposed backbone of a global church. Our real tension arises because we are claiming to be something we know we cannot be.

All United Methodist cultures are refusing to face the fact that while Jesus Christ is universal and unchanging as we meet him in faith, all of our ways of living out that faith are embedded in non-universal and always evolving human cultures. Everything visible about faith in Christ is passing away. And the tension we feel comes from the threat to the support given faith by our inevitably culture bound doctrines, forms of worship, political structures, social causes, and habits of personal piety. Everything we can see that we believe to be “us” when we look in the mirror is going, as they say, the way of the world.

We have not come to grips with death, we United Methodists. Indeed American Christians locked in these disputes have not come to grips to death. We have not accepted that there was a time before Methodism and there will be a time where Methodism is no more. There was a time before the unique confluence of historical forces and personal brilliance created our movement and formed it into a body within the Body of Christ. And there will be a time when history will dismember us. Indeed it is happening now.

Some of course will run to older and apparently more established institutions. Others will try to rebuild on what they imagine to be the unchanging foundations of the Methodist church. Others will embrace change and novelty as if a modern concept of progress (itself a cultural trope) is truly universal and unchanging. Many will muddle on, head down and faithful to the mission of the church and finding that sufficient.

Nobody wants to die, and nobody can live outside the culture that alone gives them a sense of who they are and what it means to be alive. So we hold on tightly to our culture in whatever form it manifests itself most powerfully to us and reject all the alternatives whose very presence reveals how bounded we are in space and time.

It might be better if we all accepted that we are going to die, and with us our churches in whatever form they take under our human stewardship of the Body of Christ. It’s often easier to work together if we are acutely aware that in any case we are going to die together. The more so because we are promised that in the Body of the resurrected Christ we will at last find the elusive unity we lack on earth. 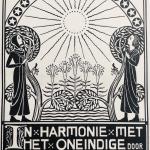 Was the Secret to Life Revealed in 1897?
Every few years, a spirituality bestseller comes out that captures the imagination...
view all Interfaith blogs
What Are Your Thoughts?leave a comment
Copyright 2008-2021, Patheos. All rights reserved.