Evangelicals and the Trinity 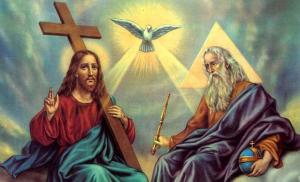 Evangelicals and the Trinity

*Note: If you choose to comment, make sure your comment is relatively brief (no more than 100 words), on topics, addressed to me, civil and respectful (not hostile or argumentative), and devoid of pictures or links. Do not merely express a feeling or “gut reaction,” explain your reason for commenting thoughtfully. Don’t just preach a sermon or cite scripture or quote someone.*

When I was a kid growing up in American evangelicalism…. Okay, I know how that sounds. I can hear someone saying “Okay, Boomer” or “old school!” But I think a serious change has taken place almost unnoticed. I can think of only one serious discussion about it that drew any interest.

When I was a kid growing up in American evangelicalism and well into my adult years, what pastors, evangelists, even musicians believed about the Trinity mattered. Of course, I know that many evangelicals,  among others, admitted openly that the Trinity is a mystery that no one can comprehend. However, we (and many other Christians) had a doctrine of the Trinity and believed it was important, even an essential of authentic Christian faith (for those mature enough in the faith to know what it says and at least partially understand it).

I took a particular interest in the doctrine of the Trinity as I continued my formal theological education in several institutions of higher learning. I read numerous books about the doctrine and about “trinitarian theology.” I learned that theologian Karl Barth was responsible for launching a renaissance of the doctrine of the Trinity after centuries of neglect and that the renaissance continued through numerous trinitarian theologians such as: Emil Brunner, Leonard Hodgson, Claude Welch, Juergen Moltmann, Wolfhart Pannenberg, Robert Jenson, Stanley Grenz, Walter Kasper, Ted Peters, and Catherine LaCugna.

I wrote my doctoral dissertation on “Trinity and Eschatology: The Historical Being of God in the Theology of Wolfhart Pannenberg.”

Through all of that detailed and in depth study of the Trinity, I learned a great deal about heresies about the Trinity including various denials of the Trinity—within Christianity. Then I realized that almost all of them existed among evangelicals! Still and nevertheless, at least formally, evangelicals, among whom I have counted myself, have always insisted on belief in God as one substance shared equally by three distinct persons as a cornerstone doctrine.

In this regard, anyway, all evangelicals have historically declined to have Christian fellowship with people who claimed to be Christian but denied the doctrine of the Trinity including “modalists,” those who believe Father, Son and Spirit are not three distinct persons but only “manifestations” of the one person that God is. This doctrine of the Trinity, which effectively denies it, was known to church father Tertullian who wrote “Against Praxeas,” saying that Praxeas has done two injuries to Christian belief in God; he crucified the Father and put the Spirit to flight. Praxeas’s heresy became known as “Patripassionism,” because he apparently denied any real ontological distinction between the “persons” of the Trinity. The modalism heresy was also known as “Sabellianism” after Sabellius who apparently taught it.

For their part, almost exclusively, Oneness Pentecostals, such as the United Pentecostal Church, stood apart from other Pentecostals and evangelicals. They have historically baptized only “in the name of Jesus” and spoken as if speaking in tongues is necessary for salvation and as if they are the only true Christians. (There are several Oneness Pentecostal denominations.)

I was indoctrinated to believe, and believed on my own for a very long time, that Oneness Pentecostals were heretics and not authentically evangelical because they were not orthodox about the doctrine of the Trinity. Basically, they did not believe in it. But the only Oneness Pentecostals I knew were United (Apostolic) Pentecostals and they considered ME and US fatally flawed in terms of our biblical Christianity. So there wasn’t really any problem. They stayed “over there in their corner” and we stayed in ours. So far as I know, all American evangelicals felt the same way about the Oneness Pentecostals.

Then some things happened. First, I got to know some Oneness Pentecostals personally and experienced the presence of the Holy Spirit among them. I just knew they were as authentically Christian as I in spite of their, what I considered, defective concept of the Godhead. Around the same time, a leading African-American pastor, leader of a network of black Pentecostal churches, man pictured on the cover of TIME magazine as Billy Graham’s successor (!) was discovered to be Oneness. Some meetings between him and some leading evangelical (or fundamentalish) theologians took place which was reported by Christianity Today. But by then his fame among and acceptance by American evangelicals (and others around the world) was established. The theological difference over the Trinity seemed like a fly being swatted away.

Then a family very dear to me, a family I have known most of my life, joined a relatively new church pastored by a famous Christian musician who was (and I assume still is) Oneness. And I discovered quite accidentally that many of the “gospel musicians” in Bill Gaither’s “Homecoming” events and on his recordings of those events were Oneness Pentecostals and I had been enjoying their songs and singing their songs for years!

The other evening my wife and I watched an episode of Mark Lowry’s podcast featuring a whole group of Oneness Pentecostal musicians! I saw two with whom I had shared a platform at an AG church. They sang and led worship and I preached. (For those of you who don’t know who Mark Lowry is, he is a long-time evangelical comedian, speaker, singer and song-writer, author of the very popular Christmas song “Mary, Did You Know?” The center of the podcast was a Oneness Pentecostal song-writer and singer whose songs are sung in many especially southern style evangelical churches. Mark is a Baptist.

What has been happening is this: The concern about modalism is vanishing among many evangelicals. They know about it, but they choose to overlook it. It no longer matters. Whether you believe Father, Son and Holy Spirit are three distinct but equal persons of God or three distinct but equal manifestations of God who is one person—Jesus—doesn’t matter. Oneness Pentecostals believe that Jesus IS the Father, the Son, and the Holy Spirit. But they have produced some of the greatest (especially southern-gospel style) Christian music of recent decades. And they are willing to overlook the difference, so why shouldn’t we? After all, I suppose the thinking is, nobody really understands the Trinity, anyway.

When I was a kid growing  up in church…some “Jesus only” (Oneness Pentecostal) people tried to join our church. My father was the pastor. He told them they could attend our worship services, but they could not teach or serve in any capacity and had better not try to spread their heresy among the congregation. Eventually they left which was to my father’s and the church’s elders a great relief. There was a Oneness (United) Pentecostal Church near our church but we never had any fellowship with them or cooperated with them.

Now, in recent decades, many United Pentecostal churches and ministers have left that denomination and become independent. Some of them keep their heresy quiet and have established good relations with trinitarian evangelicals. When the trinitarian evangelicals discover that their friends are Oneness they often shrug it off as unimportant.

Is it unimportant? That is the question of the day, here, now. What do you think? Only evangelical Christians ought to respond this time.

December 30, 2022
About Churches: They Are All Human
Next Post