every trailer park has its own rules… some let you dry your laundry out on a line, others don’t; some allow pets off leash, some don’t even let you have pets at all; some let you paint your siding any color you want, some want all of the rigs to look exactly alike; some let you build carports, some only let you have one car on your lot – and it can’t be on blocks.

but on top of the written rules, trailer parks have unwritten ones

a community where when a girl’s fiancé has been out of town pouring the foundation for the new private prison across the state for the past 6 months.. and when that man’s girl somehow starts showing a baby-bump — it’s no beuno.

even though old man harrison’s grandkid has been running a meth lab just across the lane, and even though there’s a constant parade of men coming and going out of that candy apple double-wide that always has the blinds closed, …. somehow because my girl miri got knocked up while I was gone… and because i’m choosing to stay with her anyway…. we’ve become the park’s pariahs.

i work hard and i hate having the feds take a chunk of my hard earned money – and i can’t stand that so much of my taxes are used to build-up the empire’s military so they can have 1200 bases stationed around the world – and build drones that young men sitting in chairs in air conditioned offices fly around with their joysticks to shoot missiles that kill more innocent civilians than terrorists—thus creating even more terrorists!, but when i got that letter instructing me to report to my hometown of breadhouse so they can audit me, to be honest, i was relieved.

i’d much rather have my books examined by a bunch of pencil-necked bean-counters than have the folks at the stareville trailer park glare at me and miri with their judgmental beady eyes.

so we took the tarp off my cousin’s harley davidson—well it’s not like he can use it now that he’s doing time for selling pot to try to get out of his mountain of credit card debt!— and me and miri with a 9 month bun in the oven took turns riding that hog to breadhouse. 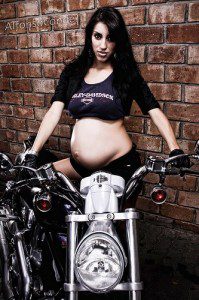 and wouldn’t you know it… when we got here, all of the members of my family had “reasons” they couldn’t make room for us…. they glared at us just like the folks back at stareville

and wouldn’t you know it… there was a bowl game taking place and all of the hotels and motels were filled up too!

the only one who took pity on us was an old asian madam who ran a brothel from her double-wide at a trailer park in breadhouse!

she didn’t let us inside, said seeing a woman who’s preggers turns off the clientle — but she’s letting us crash in the screen porch on the backside where her stray dogs and cats fight for space on the ugliest sofa you’ve ever seen!

now bear with me here… ‘cuz this is all just leading up to what happened last night.~

we’d just cleared off as much pet hair as we could from that ugly couch and were getting ready to hit the hay for the night… when… all of a sudden, miri’s water broke, I freaked, and I did the best I could to help bring that little fella out into the world.

he’s beautiful… he’s gorgeous …and he’s wise!  i mean… the way he looks at you … it’s like he already knows who you are… he sees right through you… he sees you …and you feel like he loves you just as you are.

i cleaned out a plastic laundry basket i found in the corner and put a pillow in it, and miri wrapped him up with some of my t-shirts and laid him in there…. and the dogs and cats stopped their squabbling and they didn’t make a peep the rest of the night!

and then before long, these minimum waged, rent-a-cop, security guard dudes showed up!

they’d been working over at the walmart parking lot to make sure that cars didn’t drive on the newly painted lane stripes overnight and they said the strangest thing!

one of them passed out and fell off of his chair, and when he woke up, he told the others that he’d had a wild dream – the most vivid dream he’d ever had – it was scary ‘cuz it seemed like he was dead, but the dream told him not to fear, and it told them they needed to come over to the breadhouse trailer park to see a newborn babe – ours!

they said he’s gonna shake things up and turn this world upside down!

said he’s gonna be like god! said the kid’s got a holy mission in life!

so they dropped their donuts and sprung off their metal folding chairs and found us!

now, i’m not sure about this “god” stuff, but that kid is definitely special, when you’re with him, you’re really with him, I mean he’s really there… with you…

when you hold him, you feel like you’re holding all the love in the world,

… so while they were taking turns with him, i rode over to a convenience store that’s open late and came back with a bottle of wine and a handful of swisher sweets which we lit up to celebrate.

listen, i’m not sure what you make of all of this, maybe those crazy mall cops are right, maybe not, all i know is i’m as proud as a little boy’s dad could ever be!

i’ve got some left!

let’s light up these cigars and blow holy smoke to heaven!

are you with me?

=====
back-story: this is my attempt at re-telling the Christmas story as it might occur today. i hope you enjoyed it. some have been asking me about the names of the towns. Nazareth literally means “watchtower” so “stareville” is my play on that. Similarly, Bethlehem literally means “house of bread,” hence, “breadhouse.” ; ) 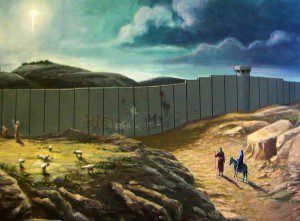 Roger Wolsey is an ordained United Methodist pastor and author of Kissing Fish: christianity for people who don’t like christianity.