Not Nero, not Caligula – Commodus.

Over the past few weeks several people have posited notions that the individual currently serving as President of the United States is similar to one of two ancient Roman emperors – Nero or Caligula. While there is some merit to these notions, I think there is a closer match who is far more compelling as being analogous – Emperor Commodus (ruled from 177-197 A.D.). 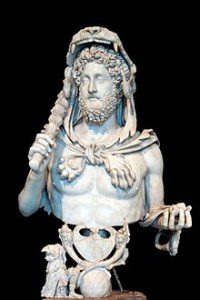 **Be sure to click on the hyperlinks embedded in this piece to see correlations to current events.**

Privileged Commodus grew up living a playboy life, grabbing all the kitty he could. He didn’t aspire to ever serve as emperor but came to it later in life. He didn’t take his studies seriously and had a reputation as being a spoiled brat who felt entitled – but without any merit, merely due to family inheritance. He came to power under sketchy circumstances, and clearly not the most qualified person for the job, knowing nothing about governing, the Roman Senate, or how to lead. And he came to office immediately after the reign of one of the most educated, eloquent, and gifted Roman leaders – Marcus Aurelius.

His first act upon taking the helm as ruler was to cozy up to Rome’s enemies on the North Eastern front and create a peace pact with people who loathed his empire. He then had coins minted with his image on them and distributed them widely to convey that “there’s a new sheriff in town.” He also went around the empire bragging about himself and created 14 days of Roman gladitorial games to celebrate his tremendous awesomeness – that he was “the best emperor ever!” While loathed by the Senate, the lower classes and many of the members of the military bought his braggadocious act and were endeared to him.

As emperor, he made it clear that he didn’t want to actually be involved with the day to day work of governing and administration, so he delegated his obligations to a handful of friends and cronies. Chief among them was his best friend and most trusted confidant Cleander –  who was manipulative, power-hungry, conniving, and had an agenda of his own – running the Empire. He wrote up many imperial edicts and executive orders for Commodus to sign – without even reading them. And several of his political maneuvers led to ruin for the empire, complete with famine, disease, and massive civil unrest – involving huge protests in the streets. Commodus was petty and vindictive and when the crowds turned on Cleander, so did Commodus – providing the masses with his head.

Commodus’ other response was to employ the famed imperial trick of “giving the people bread and circuses.” He established another round of gladitorial games and even went into the arena himself to “engage in battle.” He was victorious in his many bouts — killing most, but showing mercy to those who kissed his ring or bowed before him. Though the caveat must be added that many of the people he “fought” were aged or crippled (the audience couldn’t tell from a distance), and those he fought who were actual gladiators – unknowingly fought with swords with dulled blades. He came to believe his own hype, his ego grew, megolomania set in and he came to see himself as being the new incarnation of Hercules and he walked around with “a lion fur”, a faux mane, on his head.  In time, he was killed by a murder of senators who couldn’t take it anymore. “Et tu toupée?”

Historians recognize Commodus as being the emperor who started the downfall and demise of the Roman empire.

To the extent that this analogy is compelling and instructive, may we heed George Santayana’s insight that “Those who cannot remember the past are condemned to repeat it.” May we not flush ourselves down the great commode of time.

And may those who have eyes to see, see. 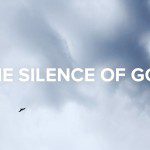 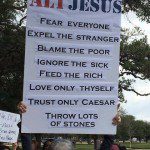 February 13, 2017 O We of Little Faith.
Recent Comments
0 | Leave a Comment
"Make services more nourishing intellectually and people will fill the pews. Use Hubble telescope images ..."
Karen Silver 10 Ways Churches Could Bring Us ..."
"The "Merlin" miniseries that aired back in the '90s or early 2000s?"
Shadsie To Hell with Hell.
"Regarding our return to regular mass shootings and voter suppression in the life of this ..."
BrotherRog America’s Needed 1-2 Punch!
"DC, Thank you for that response. Please notice that I do speak to problems in ..."
BrotherRog America’s Needed 1-2 Punch!
Browse Our Archives
get the latest from
The Holy Kiss
Sign up for our newsletter
POPULAR AT PATHEOS Progressive Christian
1