Where is God in the Pandemic? ..and other musings.

A collage of musings that I posted on my Facebook page over the past 2 weeks. These particular ones belong together: 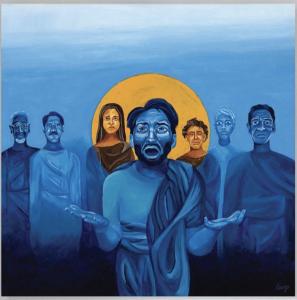 For those who are wondering “Where is God in this pandemic?”

God is in the physicians and healthcare workers who are pouring out everything they’ve got to save as many of us as possible. God is in the truck drivers and grocery store staff and pharmacy personnel who are making sure we have the essentials that we need during this difficult time. God is in the statisticians who are pointing out how grave and dire the circumstance of exponential spread really is. God is in store managers who calmly and civilly prevented people from succumbing to their reptilian lower selves and buying more than their allotted purchases. God is in the people who wipe down all of the door handles and light switches and grocery carts and all of the things to help reduce exposure to this virus. (<- art) 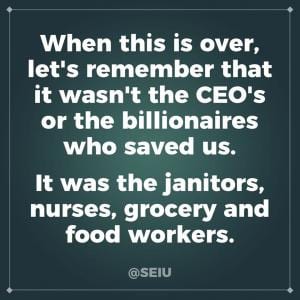 during this difficult time. God is in the experts who bravely correct the copious untruthitudes spewed by our denier in chief. God is in the growing number of citizens who get it and are choosing to hole up and isolate from society to help flatten the spread and protect the most vulnerable in our society. God is in the governors who are stepping up and providing the leadership that is needed that is lacking from further above. God is in the musicians and artists who are providing videos and concerts online for people to partake in and enjoy. God is in people who are rolling up their sleeves to give blood that is so badly needed. God is in the over 400,000 geeks who are linking up their pcs to a supercomputer dedicated to understanding the genetic structure of the coronavirus. 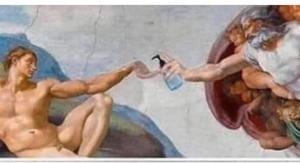 God is in the college student who sincerely apologized for his cavalier attitude and flippant remarks about enjoying spring break in Florida despite the threat of virus, and God is in our forgiving him and those who partied without knowing what they were doing. God is in the families experiencing some growth by having more time together. God is in those who are concerned about college students who are gay or trans and abused domestic partners who are in increasingly unsafe situations by coming back home. God is in the churches, mosques, temples and synagogues that are offering their services online.

God is in every one of us who is realizing that every precious moment every new now really does matter and who expresses that through making phone calls actual phone calls to the people they love reminding them that they matter. And God is in this collective wake up call reminding us that there is a better way, that we have the ability to rise to occasions and meet demanding needs, that we can do what needs to be done to make this planet sustainable. Inviting us to a needed societal reset. Inviting us to the year of Jubilee.     March 23   (art at the top:”Unbind Me” By Lauren Wright Pittman) 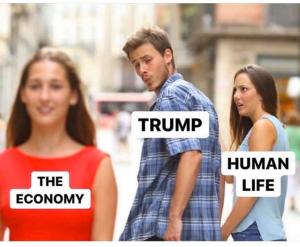 Between selling off stocks with insider information about the coronavirus, having the government bail out corporations, putting a halt to enforcing environmental protections, and seeking to hurry-up efforts to appropriately flatten the spread of the virus – in order to get the economy back to “normal” – the wealthy elite are living out the sarcastic mantra of The Dead Kennedys punk rock song “Kill kill kill kill kill the poor.” In the same way that the recent academy award winning movie Parasite – conveyed (as I see it) the subversive message that the real parasites in South Korean society are not the poor who are hustling to get by, but rather the rich who exploit the poor in order to live inordinately luxurious lives, it seems quite clear that the real parasites of 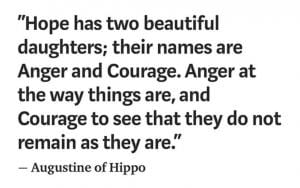 American society are the wealthy capitalists and captains of industry who really and truly could not care less about any of us in the working classes, and who exploit any and every single perceived opportunity – including a global pandemic – to fortify their respective monopolies, enhance their obscene lifestyles, and bolster their unsustainable illusions of perpetual growth. And yet, those toxic values of the wealthy elite have trickled down and have effectively become the default way of being for us all. It is not an overstatement to say that modern human society has become a parasite to planet Earth. 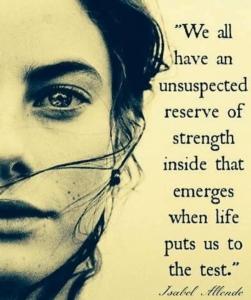 <- Posting this with the world’s healthcare workers especially in mind – but this will be applying to all of us within the next four weeks. Let’s dig in to that inner strength. It’s there, it’s ours, it’s our birthright. God is in it. It will be sufficient to get us through. 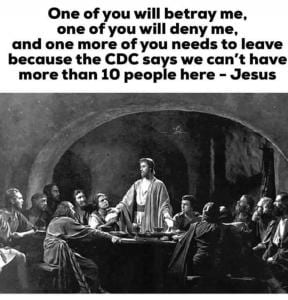 Social distancing is what Jesus would do under the circumstances. (in fact, better for everybody to just stay home separate from each other for a few weeks) 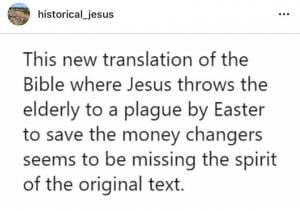 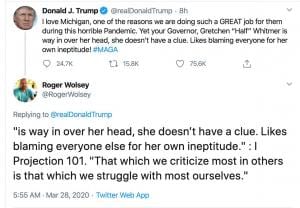 Trump tweeted: I love Michigan, one of the reasons we are doing such a GREAT job for them during this horrible Pandemic. Yet your Governor, Gretchen, “Half!” Whitmer is way in over her head, she doesn’t have a clue. Likes blaming everyone for her own ineptitude! #MAGA

I responded: “is way in over her head, she doesn’t have a clue. Likes blaming everyone else for her own ineptitude.” : I    Projection 101. “That which we criticize most in others is that which we struggle with most ourselves.”

2020 “The Crippled, Weak, and Elderly need to Die to Save the Economy!” 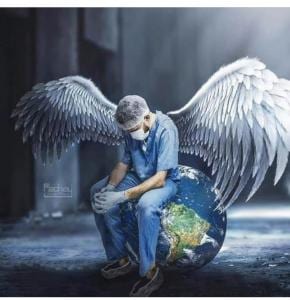 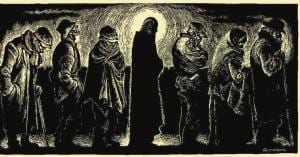 “I’m hearing more people, including fellow liberals and progressives, saying “I’m ready for Jesus to return!” These are expressions of anguish, frustration, and despair about how bad things have become lately. My response is simply that Jesus returns through us. “Jesus returns every time we forgive ourselves and others, love unconditionally, extend mercy, offer compassion, act with loving-kindness, feed the hungry, protect the oppressed, heal the sick, visit the prisoner, speak truth to power, make peace, seek reconciliation, and pursue restorative justice.” ~ from chapter 10, “Kissing Fish: christianity for people who don’t like christianity”  (art: Christ of the Breadlines, 1950, Fritz Eichenberg)  March 26

..In theological terms, …we’re talking about… “theodicy” — the issue of why an all good, all powerful, and all loving God would allow such terrible things to happen to His children? Paul was getting at this issue in this part of his letter to those believers in Rome.

“Christian” or not, we still ache from the wounds that have been inflicted upon us in life. We still mourn and grieve the loss of loved ones. And we’re still mortal beings that will continue to know suffering until the day we die. It’s been said that in the early Christian churches, that there was much “weeping and wailing, moaning and groaning” — even during worship. In fact, loud and publicly expressed moans and groans were often a regular part of their worship services, and it’s still common in some sectors of Black and Pentecostal churches here in the U.S.! “I’m gonna moan when the Spirit says moan!…”

In this passage [Romans 8], Paul describes the Holy Spirit as a Being Who advocates for us in a heavenly Court — a Spirit Who translates our groans, or maybe as a Spirit Who echoes them, just as we’ve uttered them. It could be that moans and groans are “the Cosmic and Universal language of prayer and suffering.”

Friends, because of Jesus, we know that God came to humanity to be with us in a unique way. While Jesus was alive on the earth, He was living a human life – with all of the joys and pains that go with it! This means our God was celebrating and suffering as a living human being!

Jesus Himself said to His disciples, “I will ask the Father and He will give you another Counselor to be with you forever… The Spirit of Truth … The Holy Spirit Whom the Father will send in My name will teach you; My peace I give to you… Do not be troubled, don’t let your hearts be afraid” (from John 14:1-27). And here, Paul is attempting to explain this to the people of Rome. He’s saying that our pains and sufferings, even the ones we can’t talk about, that our pains don’t fall upon deaf ears to God! Instead, because of the life of Jesus, and because of the indwelling of the Holy Spirit, we know that God is with us. We know that God is suffering with us each time that one of us is hurting. God’s Creation had to be blessed with freedom. Freedom for us to live lives with all the richness that life has to offer — including the freedom to suffer.

Church, we are assured that what we know now is incomplete. We’ve only begun to experience but a foretaste of the great heavenly banquet and blessed inheritance that we’ll all enjoy in the future. But even here and now, we can know that God is with us — sharing the broken bread that makes us whole. Amen.  ~ from the book “Kissing Fish: christianity for people who don’t like christianity”  (published in 2011, but posted on Facebook  April 16, 2013)

~~~
And, perhaps God may be found in this advice about facing our mortality, embracing, death, getting your affairs in order, and dying well  and on being a non-anxious presence in an anxious time.

** If you would like to become a patron of Roger’s work as a spiritual writer, please click Here to learn more.

March 28, 2020
Recent Comments
0 | Leave a Comment
"I miss the days when the fundie boogeyman was "secular humanism" No-one knew what the ..."
Steven Waling 7 Ways to find a Progressive ..."
"Great article. Loved it. Thanks.(Might want to change "glutinous" to "gluttonous," as noticed by a ..."
Lora Williams Judging Judgmental Christians. Trigger Warning.
"Video clip of this poem spoken aloud: https://www.facebook.com/Ki..."
BrotherRog EarthMamaGaiaGoddess
"On a related note, Not Caligula, not Nero, ...Commodus! See: https://www.patheos.com/blo..."
BrotherRog Donald Trump is The Highlander?
Browse Our Archives
Follow Us!

Progressive Christian
This Isthmus of Isness - a poem about...
The Holy Kiss

Exposing The Myth Of White Privilege
"White Privilege is a myth!" I hear some people say. Those people...
view all Progressive Christian blogs
What Are Your Thoughts?leave a comment
Copyright 2008-2020, Patheos. All rights reserved.