He’s Not a Zombie–Or a Lich

I admit, I’m a sucker for holidays that involve candy. Whatever spring fertility/rebirth festival toodles your fancy today, have a great one with those you love most. This’ll just be a quick post because I was thinking about something Easter-related.

But first, if I don’t mention this thing first I’m going to explode with laughter. Remember that ridiculous Heaven is For Real book? The one with the little kid who’d been coached by his desperately-broke dad (a church pastor) into inventing a story of an NDE involving a blue-eyed, blonde-haired Jesus, horsies and angels, and his miscarried sister? It’s getting made into a movie, and the book itself is very popular, which gives this one Christian blogger a very big sad because it’s not very Biblical (well, obviously!). He accurately describes the general concept of the story thusly:

Heaven Is For Real is written by pastor Todd Burpo and it tells the story of his son Colton who, at age 4, visited heaven. His visit came while he was on the operating table after suffering a burst appendix. He told his parents his story several months later and his parents then waited 6 or 7 years to record it in a book.

But somehow he misses that this is basically the same exact timeline used by the Gospels of the Bible except with a much, much longer duration of time between the events they claim to depict and their authors putting pen to parchment.

Plus, we know a lot more about Colton’s dad and his obvious desire to make money than we do about any of the anonymous authors of the Gospels or their genuine agenda in writing them. But he’s totally okay with the Bible doing the exact same thing this book does, and even more outrageously. Oh double-standards! Thy name is religion. I’m sure he has a billion reasons why it’s totally okay to dismiss Heaven is for Real and yet allow the Bible to do everything that invalidates the more modern book. I probably would have had the same exact reasons, once.

Now that I’ve got that out of my system (for a little while–we may revisit this topic soon because I find it endlessly hilarious), I need to clear up a small gaming-related confusion. See, we may joke about Jesus being a Jewish zombie, but I’m sorry to tell you: he’s not a zombie.

That meme running around Facebook is right–sort of. It is however wrong about him being a lich. So here is how I figured out what the character of Jesus really is, thanks to an ancient copy of the AD&D Monster Manual.

I think this is the original one I bought back when I was 13 or so, when I was first discovering tabletop gaming. It’s got my name in it, scrawled in a teenager’s hand, at least. The illustrations that impressed me so much in 1983 make me cringe in 2014, and a lot of this book would never have seen the light of day if it were put forth for publishing now, but one thing it is, and that’s concise. And alphabetical.

So I pulled it open–and had that momentary pang of loss as a sheet of notebook paper in my dead mother’s handwriting fell from it; just numbers in a table, instantly recognizable as a loot record. This piece of paper stabs me anew every time I see it and yet I cannot throw it away or put it anywhere else–not yet, not yet. Yeah, tabletop gaming was sort of a family thing, you could say. But I digress. I began reading up on some of the monsters Jesus is often compared with, starting with zombies.

According to my AD&D Monster Manual:

Zombies are magically animated corpses. . . These creatures follow commands–as spoken on the spot or as given previously–of limited length and complication (a dozen words or so). . . Zombies are slow, always striking last.

Well, phooey! See, in the New Testament, when Jesus had returned to life, he thought it’d be just hilarious to follow his disciples around messing with their heads as they walked in mourning on the road to Emmaus from Jerusalem (it’s possible this story seems so bizarrely out of place and strikingly odd in tone because it might be a shoehorned insert forming one of the story’s many, many parallels with Homer’s Odyssey). The story says Jesus even teased them, asking them why they seemed so sad (they were downright shocked that anybody in Jerusalem might not know what’d happened there so recently–which is strange, considering that in reality, not a single court historian or ambassador or scribe or literate person in the city noticed it either). His teasing act sounds kinda totally dickish to me. I mean, if one of my family members had died and been resurrected or wasn’t really dead after all, and came back to me but first hung out with me in disguise and teased me and let me mourn and grieve for a while before revealing that s/he was back, I’d be infuriated and hurt beyond all imagining! It’s okay if you’re Jesus though, I guess. What a joker, that Jesus. Totally hilare.

The point is, a zombie couldn’t pass for human, nor could he have had teasing haha-gotcha-it’s-really-me-haha-ain’t-I-just-the-funniest-guy-ever conversations with his followers. We have to look elsewhere to figure out what happened here, and it isn’t that hard to figure out what he really was.

The Facebook meme posits that he’s really a lich, which is a very powerful undead cleric or wizard who’s used ancient, evil magicks to keep his body alive. Unfortunately, a lich doesn’t quite fit the bill either:

Their touch is so cold as to cause 1-10 points of damage and paralyze opponents who fail to make their saving throw. The mere sight of a lich will cause any creature below 5th level (or 5 hit dice) to flee in panic from fear. . . A lich appears very much as does a wight or mummy, being of skeletal form, eyesockets mere black holes with glowing points of light, and garments most often rotting (but most rich).

If any of that had happened, I’m sure someone would have mentioned it somewhere in the Gospels, but no, no joy there.

Next I considered some of the other usual suspects, but the story of Jesus just didn’t fit any of those either. He can’t be an illithid (mind flayer) because illithids are allergic to sunlight (along with a number of other potential candidates, like vampires), and the Gospels often mention Jesus being out in the sunlight and not at all scary-looking. It’s doubtful he’s a shapechanged dragon because he just doesn’t seem smart enough or wise enough for that, though admittedly this Monster Manual is AD&D so the newer versions may have allowed for some different kinds of shape-changing dragons (sorry, Christians; looked at from the outside, nothing he said or did really seems very original and he didn’t do a single thing to definitively amend or fix the atrocious Old Testament’s slavery-advocating, rape-apologizing, woman-marginalizing, tribalism-enforcing, ignorance-celebrating stances, like tell people “don’t keep slaves” or “stop worrying about what other people do in private” or even tell humans about Germ Theory or anything really useful).

I pored over the manual but found only one entry that really fit the bill.

Folks, we are going to have to entertain the serious idea that Jesus is actually a D&D-style Rakshasa (which, I’m sure I don’t need to mention, bears little relation to the “real” East Indian concept of them, seen in the pic up top there). The D&D-style Rakshasa fits him a lot better. Check this description out:

Known first in India, these evil spirits encased in flesh are spreading. They are fond of a diet of human meat, and as masters of illusion they can easily gain this end. Rakshasas are able to employ ESP and then create the illusion of what those who have encountered them deem friendly. They can then withhold attack until their prey can be taken off-guard. Although capable of using both magic users’ spells (up to 3rd level) and cleric’s spells (1st level), they are not affected by spells under the 8th level. Rakshasas cannot be harmed by non-magical weapons. . .

I just want to say: WOW. That seems to work better. A Rakshasa may have either been acting like Jesus the whole time, pretending to “die” during the Crucifixion and then “resurrecting” to get closer to his prey, or else took the place of him afterward and ate the body–which would make his followers even more convinced that he’d resurrected!

Those folks on the road to Emmaus may never know what a bullet they have dodged. But no, he was no Lich, and no zombie, and no illithid. Jesus was a Rakshasa. And for a demonic hellbeast bent on devouring flesh, he looks kinda, um, cute: 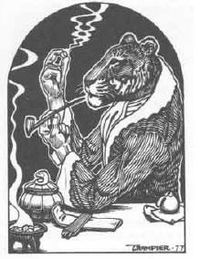 Happy Spring Holidays to you all!

April 22, 2014 Fact-Checking.
Recent Comments
0 | Leave a Comment
Browse Our Archives
get the latest updates from
Roll to Disbelieve
and the Patheos
Nonreligious
Channel
POPULAR AT PATHEOS Nonreligious
1