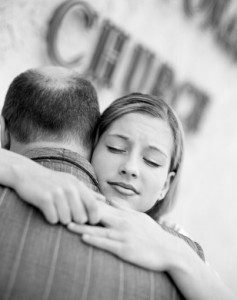 From the mythical fountain of youth to modern cryogenics, the desire to extend our lives runs deep in the human psyche. Peruse any magazine stand and you’re likely to find a dozen ways to maximize your stay on planet Earth. Some are obvious: eat healthy, exercise, and don’t abuse yourself with drugs and alcohol. Other solutions are a bit more surprising: drink green tea, eat dark chocolate, and own a pet or two. Even more counterintuitive (and perhaps less self-congratulatory) than enjoying chocolate, a recent study suggests that longevity is also linked to your readiness to forgive those who harm you.

Researchers Loren L. Toussaint, Amy D. Owen, and Alyssa Cheadle published their article “Forgive to Live: Forgiveness, Health, and Longevity” in the most recent volume of the Journal of Behavioral Medicine. The study built upon previous research linking forgiveness to higher functioning cardiovascular, endocrine, and immune systems. The logic here is simple. Healthy cardiovascular, endocrine, and immune systems are necessary for life, so, if forgiveness helps these systems function well, it ought to be associated with lower mortality rates.

So what factors determined whether these 66 year olds lived to see their 69th year? After a lot of fancy statistics and after controlling for socio-economic factors and healthy behavior, only one of the seven forgiveness scales remained statistically significant: conditional forgiveness of others. Those participants who affirmed that “Before I can forgive others, they must apologize to me for the things they have done” or “Before I can forgive others, they must promise not to do the same thing again” were more likely to die in the intervening three years.

With this result in hand, the researchers proceeded to analyze mechanisms that might mediate the relationship between conditional forgiveness of others and increased mortality. After excluding several other possibilities, they determined that the primary mediating factor was physical health. In other words, withholding forgiveness leads to decreased physical health, which in turn leads to increased mortality.

As fascinating as this conclusion is, Toussaint and his fellow researchers are quick to point out how much it does not explain. “Physical health” and “mortality” are extremely broad categories. There are many ways to be physically unhealthy and even more ways to die. So how exactly does a state of “unforgivingness” negatively affect one’s overall health? More specifically, how does a policy of conditional forgiveness get registered in the brain, how does it get translated into hormones by the endocrine system, and how do these hormonal balances affect the vital processes of the cardiovascular and immune systems? According to the authors, these questions require “a concerted effort to understand the psychoneuroimmunology of forgiveness.” In other words, there’s a lot of work to be done, and some of it is complicated enough to require 21-letter words.

In addition to the issue of tracing the cascade of bodily events that unfolds each time a person does or does not forgive someone else, these conclusions require clarification in other areas as well. Two issues the researchers mention involve the scope of the study. Since the research was restricted to Christians, former Christians, and nonreligious Americans, it remains to be seen whether conditional forgiveness influences the mortality rates of people from other religious traditions and cultures. Also, the study was restricted to the role of forgiveness among people who were 66-69 years old. Does withholding forgiveness affect all ages equally, or are the physical repercussions of conditional forgiveness particularly dangerous for seniors? Finally, an issue the authors did not address concerns how a person adopts a stance of conditional forgiveness in the first place. It is at least plausible that people who have experienced significant interpersonal pain might be more likely to forgive others only under certain conditions. If this were true, increased mortality rates might be more accurately correlated with intense interpersonal pain, rather than resultant forgiveness patterns.

So, in conclusion, if the ultimate goal of your life is to live a long life, then find a more meaningful purpose. In the meantime, eat your veggies, eat your chocolate, and – just to be safe – try to forgive your neighbors.

October 20, 2012
Religious conservatism may be driven by the disgust response
Next Post

November 8, 2012 Supernatural agents influence our social strategies
Recent Comments
0 | Leave a Comment
"menangqq adalah situs permainan poker Online dengan server kualitas terbaik dan bonus ratusan juta rupiah"
berbonusqq When the Social Order Has Legitimacy ..."
"This post is spot on. The problem is accentuated by a disparagement of cultural traditions ..."
Positivist Is Academia a Failed Initiation Rite?
"Another example of WIERD being, well, the weird exception to the rule.The "missing second half" ..."
Kevin Kostlan Is Academia a Failed Initiation Rite?
"Good points, Elritus.I think often times folks are right to resent a system (or System) ..."
connorwood The Symbolism of Old Gods and ..."
Browse Our Archives
get the latest from
Science On Religion
Sign up for our newsletter
POPULAR AT PATHEOS Public Square
1

Public Square
The Future of Religion: What Follows the Decline...
Science On Religion