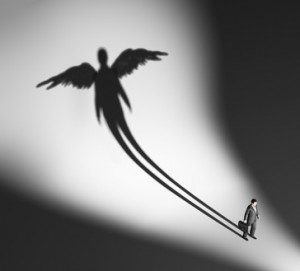 We’ve all had the experience of being spooked at some point in our lives. Maybe you were home at night when suddenly the power went out. In the dark, you became aware of something across the room, but you assured yourself that it was nothing. A moment later, however, there was no denying that the drapes were definitely moving. Of course, it was just a drafty window, but your lungs felt like they had just finished a marathon. This experience may have been the result of your mind’s predisposal toward perceiving other conscious entities in your environment; a recent research article suggests that we’re naturally inclined to attribute supernatural beings who have information about our private social knowledge.

Our brain is the magnificently complex product of an unfathomable number of influences shaping its evolution over the years. Across millennia, the brain continually invented novel cognitive mechanisms that increased our chances for survival. One of these tools is called perception of agency, and it’s responsible for the experience described above. When we encounter movement in our environment but are unable to determine its cause, this cognitive device leads us to immediately surmise the presence of an agent. In other words, we detect some other entity equipped with a mind and a will of its own. Its benefit on the savannah is not hard to imagine – after all, it would be much better to mistake some wind in the reeds for an imaginary lion than it would be to mistake a very real and very hungry lion for some wayward breeze.

There are many such cognitive tools that we employ to construct a unified and relatable picture of our surrounding environment, and research has long suggested that their influence can be found in the development of our religious concepts as well. As one consequence of this, characterizations of a supernatural being almost always involve a mental component, one that bears a striking resemblance to human consciousness. This is due to both perception of agency and theory of mind, a different cognitive device that predisposes us to infer the presence of beliefs, intuitions, feelings, intentions, and so forth, in the mind of another living entity just as we sense their presence in our own.

On the basis of this background, some have argued that we tend to believe supernatural beings possess privileged access to social information. Namely, these beings enjoy a comprehensive knowledge about the moral character of our thoughts. Moreover, others suggest that the concept of a supernatural being is associated with negative social knowledge in particular (e.g., God knows that Jezebel lies to her mother), especially if that being is capable of commanding ardent devotion. If these theories are true, however, they might prove incompatible with commonly held beliefs. While many people consciously attribute omniscience to supernatural beings, the theories above indicate an underlying preference for imagining those beings as partial to a specific form of information, rather than as completely omniscient.

Anthropologist Benjammin Purzycki and colleagues at the University of Connecticut and Arizona State University recently set out to test this hypothesis, finding that people do, in fact, find the concept of a supernatural being’s social knowledge more plausible than other forms of knowledge entailed by omniscience. To do this, they analyzed the response time of individuals answering a series of questions. Tests of this nature are commonly used in psychology to determine the difficulty our minds have in assimilating any given concept. Put simply, we take longer to respond when faced with information that the brain is unable to comprehend immediately, but our response time is much shorter when confronted with a notion that our brain is biased toward understanding.

Thus, the researchers compared the speed at which each individual was able to process and answer questions about a supernatural being’s knowledge of social activity (e.g., Does God know that Alice gives to the homeless?) with other forms of socially irrelevant knowledge (e.g., Does God know how fast Jasper’s heart beats?). Participants revealed a clear difference, responding much faster to not only the socially relevant knowledge but also the specifically negative form of that knowledge (that is, Alice doesn’t give to the homeless), even when the participant had disclosed a belief in the omniscient character of a supernatural being. In other words, most participants found it easier to comprehend a God who knows we’ve been bad than a God who knows morally irrelevant things about us, even when they consciously claimed that God knows absolutely everything – presumably even including our heart rates and other random details. From this, the evidence certainly seems to support the hypothesis that a cognitive bias hidden deep within our brain does tend to undermine the more explicitly articulated beliefs that we consciously claim as our own.

Having said that, one needs to guard against running too far with this information. Purzycki et al. sometimes appear to conclude that the more traditional belief in God’s ability to know everything is undermined or weakened by the evidence that we have an underlying bias towards believing in a God who mostly only knows or cares about moral information. But the traditional belief represents an incredibly complex and integrated understanding; it’s the product of much conscious deliberation at a far higher cognitive level. Thus, the existence of an instinctual impulse that biases us toward one particular understanding of supernatural beings doesn’t change the fact that, with careful and patient reflection, people are capable of developing a different understanding of God or other spiritual beings. Put simply, this evidence does not demonstrate that a certain group of individuals merely thought they believed in the existence of an omniscient God but now realize that this was impossible and that they must have been mistaken. Rather, they did and still do believe in a supernatural being of just such a nature. The formation of our beliefs entails a great deal, and it certainly involves more than a series of “yes” or “no” answers to survey questions about little Jasper’s timely heart.

November 16, 2012 Fraud may be rampant in science
Recent Comments
187 Comments | Leave a Comment
Browse Our Archives
get the latest from
Science On Religion
Sign up for our newsletter
POPULAR AT PATHEOS Public Square
1