Psychology and the religion-science conflict: Part 1 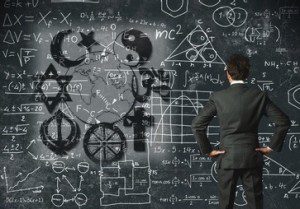 Talk of the “religion and science conflict” sets a trap: one quickly winds up pontificating about abstract objects as if they were real without any grounding in reality. “Religion” becomes a monolithic abstract entity, whose adherents all behave in the same way, and ditto for “science.” In hopes of looking at the religion-science conflict empirically, psychologists Cristine Legare (University of Texas at Austin) and Aku Visala (University of Oxford) take a psychological approach, concluding that scientific explanations do not replace religious ones. In Part 2 of this post, they critique the standard religion-science discussion.

Rather than starting with grand philosophical theories, the psychologists wanted to learn how normal people actually navigated the interaction between religion and science. Their research gathered personal accounts from adults and children to see how they handled this issue. In other words, they asked adults and children to explain how scientific and religious explanations coexisted in their minds.

The participants did this not in theory but face-to-face with three concrete cases of religion and science interaction (at least in America, though the researchers insist on these cases’ cross-cultural validity): (1) the origin of species, (2) the causes of illness, and (3) the nature of death. Each of these cases carries great emotional weight and brims with existential anxiety. For instance, questions about humanity’s origins force people to think of their relation to themselves and to the natural world, and questions about illness and death involve dealing with the problems of loss and mortality. In each case, the participant must rely on causes that lie outside of everyday experience, be they religious or scientific.

After compiling the data, three types of ways of negotiating the relationship between religion and science emerged from a psychological (as opposed to philosophical) vantage point. Importantly, all three ways involve appealing to both scientific and religious explanations because the participants overwhelmingly interpreted the above phenomena using both.

First, in “target-dependent thinking,” the participants used scientific and religious explanations to account for different aspects of the same phenomenon. For example, when the participants dealt with the nature of death as narrated from a biological perspective (for example, doctors try but fail to save a life), they readily said that the deceased’s physical functions had stopped. However, when these same participants heard death narrated from a spiritual perspective (for example, in a ceremony), adults and children alike frequently allowed for the mental functions of the deceased to continue.

Likewise, target-dependent thinking appeared in the case of the origins of life when the participants relied on evolution to explain the origins of animals, but relied on God in some way or another to explain the origin of humans. As for the case of illness, participants from South Africa, when told of the supernatural risk factors for AIDS, attributed it to supernatural factors (such as witchcraft) more than biological factors, and at same time would attribute it more to biological factors than supernatural ones when presented with the biological risk factors.

Third and finally, “integrated thinking” explicitly reconciled religious and scientific explanations by using them for different levels of explanation. For example, regarding the origin of species, one could say that God sets up natural laws such that they would eventually produce humans, but at the physical level humans came about purely by these natural laws without divine intervention. Science answers the “how?” and religion the “why?” Or take the case of AIDS as seen from a South African’s perspective: AIDS spreads by unprotected sex, but witchcraft clouds one’s judgment or makes it more likely one will meet someone with AIDS.

In all three types of thinking, scientific explanations did not replace religious ones, but coexisted with them in various ways. While the authors are more than aware that certain popular authors have made a living pitting religion against science, the everyday person engages in a more nuanced strategy. The researchers’ psychological data shows that most people have scientific and religious explanations living side-by-side, and from this the researchers conclude that “supernatural reasoning seems to be a general feature of human cognition.”

For those who can’t wait, see “Between Religion and Science: Integrating Psychological and Philosophical Accounts of Explanatory Coexistence” in the journal Human Development.

March 6, 2013
Video games: they have what atheists need
Next Post

March 22, 2013 Psychology and the religion-science conflict: Part 2
Recent Comments
0 | Leave a Comment
"MY thinking on this has been profoundly affected by Gladwell's recent book Talking to Strangers ..."
Joseph M Racism and the Professional Class
"Thanks, John. I apologize – your comment spent a long time in the spam filter, ..."
connorwood The Human Need for Culture
"This is the best critique of liberalism I've ever read. I'm a liberal. I grew ..."
John Hules The Human Need for Culture
"My colleague at the Foundation for Religious Diplomacy may reach out via email with some ..."
John W. Morehead The Human Need for Culture
Browse Our Archives
get the latest from
Science On Religion
Sign up for our newsletter
POPULAR AT PATHEOS Public Square
1

Finding joy in 2020? It's not such an...
The pandemic and political turmoil have left many people feeling anxious, angry...
view all Public Square blogs
What Are Your Thoughts?leave a comment
Copyright 2008-2020, Patheos. All rights reserved.