Video games: they have what atheists need 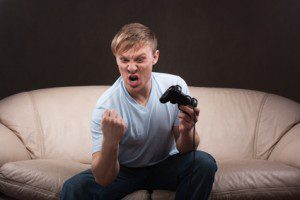 Any regular consumer of Internet content may have developed some stereotypes about atheists. Atheists like Reddit.com. They enjoy cat videos (but then again, who doesn’t?). And they mistake fundamentalist Protestantism for all religion. But while these claims could easily be refuted by hanging out with actual atheists – for instance, many are quite religiously literate, and not all have Reddit accounts – a burgeoning academic field is trying to identify the genuine cognitive and personality differences between atheists and religious believers. In one recent paper, researchers found that atheists strongly preferred video games to board games, and argued that this difference was due to atheists’ reduced inclination for conjuring imaginative worlds.

Canadian psychologists Christopher T. Burris (St. Jerome’s University) and Elyse K. Redden (University of Guelph) were inspired by Burris’s previous work showing that atheists appeared to process emotional information differently than religious believers. This research, which has been covered elsewhere on this blog, demonstrated that atheists showed less intense emotional responses to stimuli than their religious peers, and were less capable of reconstructing the subjective details of memories. At the same time, atheists were more articulate about their emotions and experiences. Burris interpreted these findings to suggest that atheists may simply have less capacity than religious believers for internally simulating emotionally detailed environments. In other words, atheists may have imaginations that are good at relating facts and labeling things, but which aren’t as good at generating rich sensory or emotional detail.

In a leap of scientific creativity, Burris and Redden used these previous findings to generate a new, unconventional hypothesis: atheists would prefer video games to tabletop games, since tabletop games require a more vivid imagination in order to be enjoyable. After all, a bunch of cards, dice, or plastic figures aren’t much fun when they’re just sitting there. They need to be imaginatively animated or “brought to life,” as it were, in order to provide entertainment. If you’re not as naturally inclined to bring imaginary worlds to life, you just might not be so interested in tabletop games.

Video games, on the other hand, don’t require you to do as much imagining. They serve up rich, colorful, and detailed worlds automatically – no need for extra sensory input on your part. So, the researchers presumed, atheists would tend to prefer video games, since they wouldn’t need to do as much imaginative work in order to participate in and enjoy them.

Of course, video games are pretty fun for most people, atheist or not. Surveying more than 220 students at an Ontario university, the researchers found that, in fact, everyone preferred video games to tabletop and board games. Religious, agnostic, and atheist students alike all indicated that a round of Mario Kart or Guitar Hero was more appealing than a sedate evening of Trivial Pursuit. However, this preference was much stronger for atheists – while religious students indicated a mild preference for video games over board games, their atheist peers reported that they would much rather play something that required cords, controllers, and screens.

Trying to understand the ramifications of this difference, Burris and Redden used a survey to determine the students’ capacity for what’s called “absorption” – that is, the ability to become totally engrossed in an experience or task. For atheists, absorption predicted increased preference for video games, and an even further reduced preference for tabletop games. For other students, including both religious believers and agnostics, capacity for absorption didn’t affect game preference one way or another. The researchers hypothesized that this effect was due to the fact that atheist gamers who were capable of “really getting into it” were able to enjoyably connect with the prepackaged sensory content of video games. But when they were confronted with tabletop games, there just wasn’t as much “it” to get into – and so they were faced with the unpleasant prospect of being mentally absorbed in an experience that wasn’t very interesting, or rewarding.

Following previous researchers, Burris and Redden found that certain personality characteristics were generally associated with atheism – in particular, atheists tended to be extraverted, open to new experiences, and not especially agreeable (at least in comparison with religious believers). But in statistical analyses, none of these personality factors explained the association between atheism and preference for video games, leaving the researchers to conclude that their original hypothesis was correct: self-identified atheists preferred video games because those types of games didn’t require them to construct vivid imaginary worlds.

Interestingly, these effects held true only for atheists. Self-identified agnostics and merely non-religious students didn’t prefer video games over tabletop games any more than religious students did. Burris and Redden argue that this aspect of their findings lends support to the growing consensus that atheists are distinct from other nonreligious populations when it comes to certain identifiable personality and cognitive factors.

So does this research mean that atheists are somehow inferior to religious believers? Of course not. A more useful interpretation of these findings might be that different personality types and cognitive patterns simply lead to  different approaches to a wide variety of experiences, from religious inspiration to Saturday night gaming with friends. And, since this is a world with as many different personalities as there are people, maybe that’s all right. As long as there’s still someone to keep posting new cat videos.

Click here for the original article, “No Other Gods before Mario?: Game Preferences among Atheistic and Religious Individuals,” in the International Journal for the Psychology of Religion.