How religion will save the world 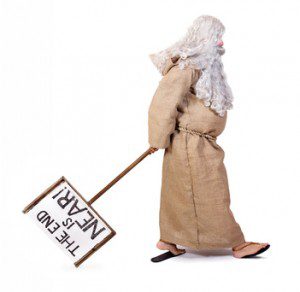 This past weekend, Western Christians celebrated Easter, the most important holiday of the liturgical year. Easter offers believers an opportunity to reflect on death, rebirth, and hope. This year it also came only two days before Earth Day (happy Earth Day!). Great, because some other news – mostly from the New York Times, admittedly never a wellspring of uplifting inspiration – reminds us that things aren’t all peachy for the Earth. With some experts placing the odds of total ecological collapse by midcentury at 50/50, it’s time to start mining our religious and spiritual traditions for all the hope and insight we can get. Among the most important of those insights is the concept of “sacred.” It may sound quaint, but history shows that without sacred values, human cultures just don’t work.

Calm down – I’m not claiming that religions will mumbo-jumbo away our problems. It’s going to be scientists, garage inventors, and daredevil investors who create sustainable energy infrastructures or tools for neutralizing atmospheric CO2. So rest assured, tech folks: your jobs are secure. We need you more than ever.

But here’s the thing: our biggest challenges in dealing with climatic and ecological threats aren’t going to be technological. Our biggest challenges in tackling these large-scale problems are going to be overwhelmingly social. I’m talking about securing consensus and agreement on these looming ecological and systemic catastrophes, and how to marshal our shared resources to address them.

Keep in mind that these catastrophes are so profound that some prominent environmentalists and activists have publicly given up, claiming that total systemic collapse is now inevitable within the next few decades. The New York Times printed an entire piece on one of them, Paul Kingsnorth, last week. But if you haven’t yet reached quite that level of pessimism, you’re probably hoping that informed leaders will be able to come up with some major crisis-averting plans and garner sufficient support to put those plans into action.

As the past 20 years of public dialog in the United States have shown, though, scientific and logical proof aren’t enough to win support for big ideas. You need motivations to get people to sign on to major social agendas.

This is why religion is going to be one of the most important “technologies” of the coming century. There is literally no other social phenomenon capable of unifying and motivating people as religion does. As I’ve written before, religions offer enormously powerful tools for linking people into communities, from synchronized bodily ritual to shared imaginative worldviews. Sure, these tools can be used for evil – think of the Nazis marching down the streets of Paris. But this just means that the tools work. A bunch of disparate people who conduct the same ritual together for months will be a tight, cohesive collective at the end, for good or ill.

But even more important than social unity is the idea of sacredness, which all cultures and religions share in various forms. Sacred things, by definition, are set apart – that’s one of the meanings of its Latin root, sacrare. Anthropologists and linguists have found that, around the world, all human societies identify certain things they value so much that those things are set apart from all other things and considered inviolable. (Which things those are differs by culture, of course.)

Accordingly, the cognitive anthropologist Scott Atran characterizes “sacred values” as those things or ideas which can’t be traded for any amount of money. An expert in religious conflict, Atran has discovered that when conflict negotiators offer money to convince a religious group to compromise on sacred values – occupying the Dome of the Rock in Jerusalem, for example – the offer always backfires. Instead of rationally accepting millions of dollars in exchange for abandoning a sacred patch of ground, religious groups actually get insulted by monetary offers. They then become even more rigid in their positions.

Sacredness, then, is not rational – not in the sense of being the result of a calculation or a chain of logic. No one sits down and thinks, “Well, this piece of land is worth $400,000 and that piece over there is worth $1 million, so obviously the other piece is more sacred.” No – convictions about what’s sacred come before the evidence, when individuals and cultures decide a priori that some things are simply of infinite worth.

Why does this matter? In an ecological context, an agreement that some things are intrinsically sacred can actually help cultures to act in ways that are more sustainable in the long term. For instance, in Southeast Asia, as in many other parts of the world, spirits and ancestors were traditionally considered to live in the forests and mountains. Belief in those sacred spirits long discouraged human inhabitants from destroying, mining, or developing the sites where they were supposed to live. Only with decreasing belief in those “place spirits” has increasing development, along with its environmental costs, come to countries like Thailand.

Now, I don’t buy Rousseau’s “noble savage” myth. Indigenous groups all around the world have done plenty of ecological damage to their environments. And just believing in spirits or holding some places to be sacred does not mean that a culture doesn’t wage war, oppress women, or overhunt the local fauna. But cultures that hold some things to be sacred have at least a shot at preserving their ecologies for the future, because they understand that not everything is potentially for sale. Cultures that hold nothing to be sacred – which describes our global, neoliberal culture pretty well – have, on the other hand, essentially zero chance of surviving in the long term. When everything is for sale, market forces inevitably drive overconsumption of resources until collapse is a certainty.

This means that, as I’ve implied before, environmentalists and educated folks need to overcome their distaste for ideas like sacredness. These ideas are not just amorphous holdovers from traditional superstitions, to be regarded as minor embarrassing reminders of our cultural history. They are basic categories of human social life, and without them our cultures become cancers. You must set some things apart, or everything will become a potential market commodity and your culture will eat its ecology alive.

This is what we are currently doing. By many measures, we’re depleting natural resources – such as forests, rare earth metals, and fossil fuels – so rapidly that we may not be able to switch to more sustainable ways before collapse. Rising sea levels are threatening to literally wipe entire nations off the map. And the worldwide extinction of plants and animals, only the sixth mass extinction in Earth’s history, races ahead unabated.

It will take enormous technological resources to make it through this century intact. But it will require even more social and religious – yes, religious – resourcefulness. For one thing, the world’s elites need to relearn how to see some things as sacred. This will be an exercise in humility, because sacredness is associated with the religious and traditional peoples, and these are precisely the folks elites define themselves against.

But that’s not all. Religious believers and the traditionalists need to stop acting so defensively in protecting their cultures, and they need to massively step up their level of skill and intelligence in dealing with the outside world and global problems. Yes, the secular world is sometimes hostile to religious interests. But communities only act defensively if they think the other guys have all the power, and the anthropological and historical records, as well as a burgeoning line of research in the cognitive and social sciences, strongly suggest that it’s secular culture that will always be at the disadvantage. After all, religions have the enormously powerful tools – ritual, meaningful worldviews, and a belief in sacredness – that make human communities possible.

Of course, it’s conceivable to make communities work without such tools, but only when things are generally going well, as in contemporary Northern Europe. As soon as genuine problems emerge, any social compact based on purely utilitarian benefits will be abandoned more quickly than a treaty between American Indians and the U.S. Government. And so to survive major shocks, we need social agreements backed by a moral “gold standard” not of rationalist utility calculations – as Sam Harris has naïvely argued – but of non-rational, a priori beliefs in the “sacredness” of certain things or ideas. In other words, we are going to need the tools of religion if we hope to tackle our biggest problems successfully.

This ensures that religious communities ought to have a central place at the table when we  discuss our global problems. But they also must show that their presence won’t devolve into parochial bickering or narrow-minded accusations. We need a general, cosmopolitan sensibility that sees cultures as morally relative, vis-à-vis one another, but also understands that certain basic categories such as sacredness exist cross-culturally and are fundamental features of our evolved, social minds. By drawing from the obscure wisdom of religious traditions, we can learn how to use such categories in our global context, and maybe – just maybe – avert catastrophe. And so the message of this Easter, and this Earth Day, is that technology and know-how might help save the world. But religion, with its irrational beliefs about what’s sacred, will make it possible.