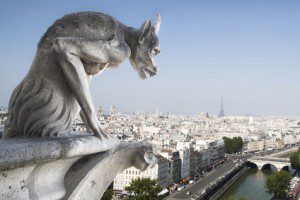 Are religious folks nicer than nonbelievers? Popular stereotypes would say “yes,” and one line of thinking in psychology concurs. This “religious prosociality hypothesis” claims that religions inspire adaptive, cooperative behavior in their adherents as a matter of course, and that one of religion’s main purposes is to encourage group-oriented morality. But many experts disagree, arguing that nonbelievers are just as moral as the faithful. Into this longstanding fray comes some fascinating new research showing that religion actually does encourage prosocial attitudes – but only in countries where people are free to choose whether or not to believe.

Prosociality refers to behaviors that create ties of trust and reciprocity between individuals; examples include generosity, honesty, and reliability. These habits are considered “prosocial” because, without them, social bonds fall apart. (Imagine if nobody in your social circle ever told the truth or shared with each other – how long would it continue functioning as a social circle? Not long.) Thus, the religious prosociality hypothesis actually represents an offshoot of the more general theory – widespread in the social sciences – that religion is the glue of societies, helping forge the basic moral agreements that guarantee individuals’ trust in one another.

However, the research on religion and prosociality is somewhat mixed. Many researchers have reported clear connections between religious adherence and prosocial behaviors, while others contest those claims or insist that religious people only report better behavior in order to reflect socially desirable standards (that is, to look good). Cologne, Germany, researchers Olga Stavrova and Pascal Siegers were intrigued by this seemingly contradictory body of research, and in a recent paper they added their own, unique suggestion to the debates: religion’s correlation with prosocial behaviors might only be apparent in societies where being religious is a choice.

Stavrova and Siegers decided to test this  hypotheses by collating data from the 2009 wave of the World Values Survey, the 2011 wave of the European Values Survey, and the 2008 wave of the International Social Survey Programme. Each of these surveys asked thousands of participants – in dozens of different countries – about their values, attitudes, and beliefs. Stavrova and Siegers identified questions and sub-surveys within the larger surveys that addressed questions of religion and morality.

To ascertain each country’s level of religious freedom, for example, the researchers drew on a single item from the World and European Values Surveys: “Politicians who do not believe in God are unfit for public office.” Each country’s average level of agreement with this item was taken as a proxy for the amount of social pressure to be religious – and, thus, a reverse measure of religious freedom. Countries such as Indonesia and Romania scored high on this measure, indicating what the authors called high  “social enforcement of religiosity.” Countries such as Sweden and Iceland scored lowest, indicating very little social pressure to be religious. The United States and the United Kingdom scored in between these extremes.

The researchers then cross-correlated this index of religious social enforcement with other measures, including average level of religiosity and intrinsic religious orientation. Intrinsic religious orientation refers to a sense that religion is valuable for its own sake, rather than a means to various social or practical ends. Researchers have used this construct for decades to measure how deeply religious believers internalize the teachings and values of their traditions.

The other measures examined by Stavrova and Siegers followed a similar pattern. For instance, in countries where it was more socially normative to be religious – such as Iran – both believers and non-believers contributed to charities at the same (remarkably low) rate. But in countries where people were generally free to to be religious or not, nonbelievers gave relatively little to charity, while believers were more than twice as generous.

Respondents’ attitudes toward lying were also significantly influenced by social enforcement of religiosity. In religiously strict societies, both believers and nonbelievers insisted that it was never acceptable to lie in order to protect or benefit oneself. But in religiously free societies,  nonbelievers were much more likely than believers to indicate that it was sometimes acceptable to lie in one’s own self-interest.

Finally, strength of religious belief also predicted condemnation of liberal morality more accurately in religiously free societies. That is, in religiously normative countries, nearly everyone – religious or not – condemned abortion, homosexuality, and divorce. But in religiously free cultures, sincere believers were significantly more likely than nonbelievers to disapprove of such activities.

What does this mean for religious prosociality? Well, if you count contributing to charity as a prosocial behavior, then religious believers in countries like Sweden – but not Iran! – are the most prosocial folks out there. If you focus on self-reports of fraudulent behavior, then the same holds true. But if you consider sexual liberties to be a fundamental moral good, then the only people who pass muster are nonbelievers in religiously free societies. As usual, the actual data present a complex picture of the relationship between religion and morality – one that’s unlikely to make anybody completely happy.

There are some reasons to be hesitant about extrapolating too much from Stavrova’s and Sieger’s research. First, all of their data was gathered through self-reports – so they weren’t measuring real-life moral behavior, but only how people represented their moral values on an impersonal survey. However, these data were culled from three different surveys carried out over several years, and each of these surveys asked about many, many other subjects. In addition, previous research has shown that believers in highly religious countries are the most likely to overreport their prosocial and moral actions in order to “look good.” Since this is precisely the opposite of what Stavrova and Sieger found, the authors argued that their findings probably weren’t due to “social desirability,” or subjects trying to make themselves look more moral or ethical than they actually were.

The more important challenges to their findings are interpretive and theoretical. Stavrova and Sieger claimed that there “universal religious values” underlie all the major traditions. Thus, according to Stavrova and Siger, believers in Muslim countries like Turkey and nominally Christian ones like the UK ought to have the same basic moral underpinnings. But this stance downplays the very real differences between cultures and religions. For instance, marital monogamy has always been a major moral emphasis in Christianity, while well-off Muslim men are allowed to have up to four wives. In Confucian East Asia, neglecting to venerate one’s ancestors can be profound breach of moral code, while in Catholic countries ancestor worship is sinful. Moral universalism may thus obscure serious differences between different traditions.

Finally, the authors measured intrinsic religiosity with only a single, proxy item: “To me, life is meaningful only because God exists.” This question isn’t found in the most widely used measures of intrinsic religiosity, and – to risk being blunt – it’s not clear that it actually measures what the authors claim it does. Intrinsic religiosity, as described in the social scientific literature, is the pursuit of religious life for its own sake, rather than for economic, social, or egoic goals. While God’s importance in the meaning of life suggests a centralization of religious concerns – a component of intrinsic religiosity – it’s still not quite the same thing. And because it assumes that God is the central ingredient in religion, it eliminates most Buddhists and many East Asians from being able to report any intrinsic religiosity at all. Considering that East Asians and Buddhists count for a massive chunk of the world’s population, this is a serious failing.

Nevertheless, these findings are still intriguing. The study’s results suggest pretty strongly that religion makes a bigger difference for morality in religiously free countries than in religiously strict ones – in all kinds of ways. In a sense, it’s not surprising that religious believers would stand out more clearly in cultures where there’s little social pressure to be religious. But this raises an important question: does religion only work the way social scientists think it does when people are free to take it or leave it?

May 7, 2014
What happens when inequality grows? Ecstatic religion flowers.
Next Post

May 27, 2014 4 neat theories of religion
Recent Comments
202 Comments | Leave a Comment
Browse Our Archives
get the latest from
Science On Religion
Sign up for our newsletter
POPULAR AT PATHEOS Public Square
1