Useful Monsters and the Problem of Fear

Beneath the amber waters of the River Tees in Northern England lives a creature named Peg Powler. Peg is a mermaid — but don’t picture the perky Disney redhead. Peg is a river hag, with green hair and skin and a row of jagged teeth. Unlike Ariel, Peg lives not to make children glad, but to kill and eat them.

Peg Powler lives in the foamy yellow rapids of the river. Wander too close to the river’s edge, goes the mother’s warning, especially near that foam, and Peg will have you by the ankle. She’ll yank you below the water and eat you up, flesh, bones, and all, ending with a belch of yellow foam.

The Tees is no meandering stream. Dropping from its rugged source on Cross Fell, it roars through narrow, rocky vales to produce coursing rapids and three of the most impressive waterfalls in Britain—Low Force, High Force, and the unbeatably-named Cauldron Snout.

In addition to its rapid speed, the water of the Tees is extremely cold. It’s this feature that causes someone falling into the water to inhale in a sudden gasp, one of the most common causes of drowning. Add the fact that the Tees runs as much as fifteen feet deep with intense undercurrents, and drownings are a logical but tragic drumbeat throughout the river’s course and history.

It makes sense that the legend of Peg Powler was born on the banks of the Tees rather than the sluggish Thames. The creature was imagined into existence for one purpose only—to scare children safe. She is naturally said to live in the foam, which both marks the most dangerously turbulent spots in the river and obscures the view of the water below. The occasional drowning reinforces and perpetuates the legend. Peg will have her meal.

These monster legends find fertile soil wherever there are parents and water. Inuit Islanders warn their children of Tizheruk, an enormous sea snake said to snatch children from shore with its tail. For Serbs, it’s Bukavac, a six-legged lake-dweller that jumps from the water to strangle passersby—and again, a culinary preference is expressed for the young. Even as water-starved a region as aboriginal Australia has a water-dwelling child-eater called the Muldjewangk living in the Murray, one of the few major rivers on the continent.

But of all the water-warning legends on Earth, it’s hard to beat the kappa of Japan for creative details.

Primarily a harmless trickster-spirit who loudly passes gas and looks up women’s kimonos, the kappa is said to occasionally snatch a child from a riverbank, drag him or her below the water, and—as if all this weren’t dissuasive enough—to suck out the child’s organs through the anus. To this day, many Japanese towns and villages post illustrated (but thankfully not overly detailed) signs along the banks of rivers and lakes warning children to beware the kappa.

There are childhood dangers other than water, of course. Slavic mothers have traditionally warned their little ones not to wander off in public places for fear of Baba Yaga, a witch who preys specifically on lost children. Dropping from the sky in a flying mortar and pestle, Baba sweeps the lost ones off their feet and takes them to her hut on chicken legs, which is surrounded by a fence built from the bones of her tiny victims.

In Upper Egypt, parents warn of the monstrous silowa, which is said to pass through villages from its home in the hills at dusk to get a drink at the Nile, snacking on children along the way. This by itself would be no more extreme than any of the monsters invoked above, but the landscape of fear for rural Egyptian children extends far beyond specific physical protections into a network of superstitious horrors. Children are warned not to look at their own shadows lest they go insane and are instructed to chant passages from the Qur’an whenever passing “haunted places”—which according to some observers seem to occur every ten steps in most villages. Kenyan toddlers who will not nurse are set outside in the dark while the mother calls loudly from the hut for the manani (wild beasts) to come and eat the child.

Eucalyptus trees in Australia— called “widowmakers” for their tendency to suddenly lose enormous branches—are said to shelter vicious man-eating koalas known as “drop bears” for their practice of dropping and dining on those who camp beneath the tree.

The child-munching hiisi of Finland live in and around crevasses, large boulders, and the edges of cliffs; and the Polish ghoul Południca causes children trespassing in cornfields to become forever lost among the stalks.

And so it goes, in every culture and time. We populate an already frightening world with useful monsters, hoping to bring ill-defined risks into focus, keeping the most vulnerable among us safe—terrified, yes, maybe prone to social conservativism, but alive.

Warning legends like these tend to involve a kind of cost-benefit analysis: The cost to the child in fear and mental anguish is weighed against the potential for harm, and the benefit of protection—from dangers real or parentally imagined—almost always wins. This is not a conscious process, but a subconscious cultural calculus by which a monster’s terrors are equated to a danger in the parents’ eyes.

But protective monsters have one serious failing: they are often specific, even when the danger they represent is general. A child who learns to fear Peg Powler will not necessarily generalize the danger to other rivers, much less to other risks. On a visit to the River Spey in Scotland—no less dangerous but free of the peat-stained yellow foam—a child raised to watch for Peg might happily tempt the waters, since the fearful hag is so very far away. By misrepresenting the danger, it could be argued that specific supernatural protection myths make children less safe than a reasoned description of real dangers.

A fear-based approach to parenting or education is among the least effective options at our disposal. It works in limited, short-term ways and fails as a solution to the more general long-term problems for which parents must prepare their children. But generation after generation, we too often reach for the easy fix of instilling fear. The result is a vigilance paradox: Continuous anxiety, and the naming or personification of evil, makes us feel vigilant and therefore safe, while in fact distracting us from real risks, making us less safe.

Useful monsters serve the admirable purpose of protecting children from potentially lethal harm. While an argument can be made for allowing kids to make mistakes and learn from them, there’s little point in advocating the occasional slip into a fast-moving river as a lesson in avoiding danger. There’s a very real chance that no further opportunities to use that wisdom will present themselves.

So the problem isn’t the useful monster per se — it’s the next step. Having found fear a useful tool for protecting children from harm, adults often find it difficult to resist using fear as a tool of control — for children, and for each other.

DALE McGOWAN is the author of several books from the nonreligious perspective. He was Harvard Humanist of the Year in 2008 and founded the humanist charity Foundation Beyond Belief in 2010. He is currently Content Development Editor and Atheist Channel Managing Editor for Patheos. He lives in Atlanta. 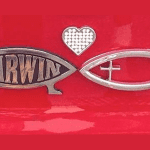