Caught in the Web of @theist Dating 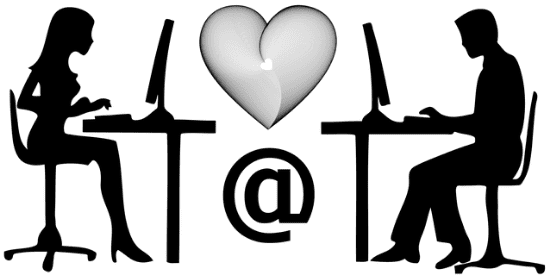 In Fiddler on the Roof, Tevye’s daughters sing,

Make me a match,

Find me a find,

Catch me a catch.

Yet those days are long gone. Nowadays, people who don’t meet a mate through natural means have to act as their own matchmakers. And as I learned, being an atheist didn’t make me such a catch for many non-secular Jews.

When I read Dale McGowan’s account of how he broke his atheism to his then-girlfriend (now wife), I couldn’t help thinking that I never would’ve gotten to that point. That’s because I had the habit when I was dating of ham-handedly blurting out my atheism right from the start.

There was no letting the guy get to know me first. Maybe ease him into it. Oh no. It was practically, “Hi, I’m Stephanie. I’m an atheist. Nice to meet you.”

That’s an exaggeration, of course, but my excessive sharing was compounded by the fact that I was initially exploring Jewish singles groups in my quest for a life companion. This is somewhat odd behavior from someone who, as a small child, once pointed to a group of Orthodox Jews and said, “Mommy, what are those funny beanies they’re wearing?”

Not only have I never practiced Judaism, we never even celebrated Jewish holidays, as many secular Jews do. My agnostic mother felt no nostalgia for her faintly Jewish upbringing and had no interest in following Jewish traditions.

So why was I pursuing a Jewish match? Racial purity? Of course not. Cultural identity then? Well, only aspirationally speaking. Though I didn’t grow up with a strong sense of Jewish culture, I had developed a self-identity as a Jew, ironically about the same time I became an atheist, when I was 14.

To me, my Jewishness was completely divorced from Judaism. I wrote a short story about Jewish history and identity, “The Tyranny of Memory,” and it never even occurred to me to deal with Judaism in it. (It was published in a venerable secular Jewish magazine with Marxist roots called Jewish Currents.)

I was so used to thinking of Judaism as separate from my Jewishness that I was genuinely shocked when I encountered Jews who denied that I was even Jewish because of my rejection of Judaism. To me, Judaism is the religion of the Jewish people. It’s both a religion and an ethnic group. Yet I’ve talked with atheists of Jewish ancestry who have said they used to be Jewish. I find this attitude puzzling. After all, it wouldn’t have mattered to the Nazis that I’ve never practiced Judaism. Then again, do I want my identity to be defined by Nazis?

Still, the only time I’ve stepped foot in a synagogue was for a Jewish singles group. I had been assured it was secular, but my experience there suggests otherwise.

Now, you have to understand that I’m not exactly a social butterfly. I don’t tend to strike up conversations at gatherings, which can be a bit of a handicap in social mixers. But I couldn’t help noticing the tall, dark, and handsome man watching me appreciatively.

I sidled up near him and waited for him to say something to me. He did.

He was totally into me, and I liked him, too. But on our second date, I casually mentioned that I was an atheist.

A chill suddenly descended on our table. He looked into my eyes, and said quite sincerely, “How can you be moral without God?”

I like to joke that I should’ve said, “You know, you’re right.” And then stabbed his hand with my fork.

But of course I didn’t, because you don’t need God to be moral, a fact I patiently explained to him. (Really, as a practicing Jew, he’s worried about me not getting my morality from the bloodthirsty God of the Old Testament? Shouldn’t he have been relieved?)

Actually, I had mentioned my atheism on our first date, but perhaps because I talk fast, he missed it. There was no third date.

You’re probably thinking, you met him in a synagogue, wasn’t that a clue? Yes, of course you’re right. But I believed it was a secular Jewish singles event merely being held at the temple.

Perhaps the problem lies with differing definitions of secular. But why did I mention my atheism so early (besides my congenital lack of tact)? My thinking was that if they’re going to have a problem with my atheism, it’s better to find out right away.

I never went back to that group, but I gave in and tried JDate, the online Jewish dating service, and began attending some of their singles events. Surely I would find some secular Jews looking for people with whom they shared a purely cultural affinity.

But even there I met guys who really liked me…until they learned I was godless. While I was looking for Jews because I thought they were more likely to be simpatico with me, they were searching a nice Jewish girl they could break matzo with on Passover.

The capper came at a JDate Halloween party. I was dressed as a jester, but the reaction of the funny guy with whom I had instant chemistry was no joke.

We were chatting away happily in a booth away from the booming music, when I uttered the A-word.

Instantly, he withdrew his arm from my shoulder—perhaps I understated how well we had hit it off—and stammered, “I…I can’t have my children raised by an atheist.”

We just met and he was already evaluating my fitness as a mother? Maybe he should’ve just dialed 1-800-rentawomb. But to be fair, I was screening potential mates too with my upfront declaration. We both failed the test.

Clearly, I needed to broaden my horizons.

I decided to look for secular singles groups. The only I could find in my area was hosted by the Center for Inquiry West. Perfect!

I thoroughly enjoyed the stimulating conversation at the two skeptics’ singles meetups I attended. But I was considerably younger than most of the attendees. Sadly, I was forced to conclude that I would have to look elsewhere.

As for JDate, I eventually did date a Jewish atheist via the cyber end of the computer dating service. But I decided to branch out and try Match.com when that relationship ended. That’s how I met my long-time boyfriend Keith.

To be honest, with my non-religious upbringing, I don’t know if I could form a lasting relationship with someone who was religious. Perhaps it would’ve been different if I had met someone the old fashioned way. Love will out. I’ll never know.

As hurtful as the rejections could be, perhaps my real mistake wasn’t my preemptive confessions, but in my misguided idea of where I could find a compatible mate. The secular Jews I was seeking were smart enough to avoid Jewish dating services in the first place.

In the end, I was able to cast out a worldwide web to catch a nonbeliever I would otherwise never have met in the sprawling city-state of Los Angeles.

Tevye wouldn’t have approved, but I’m far from the shtetl. 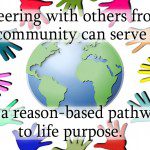 March 6, 2016
Secular Civic Engagement and Your Life Purpose
Next Post

March 16, 2016 The Donald Made Them Do It
Browse Our Archives
Related posts from The Secular Spectrum